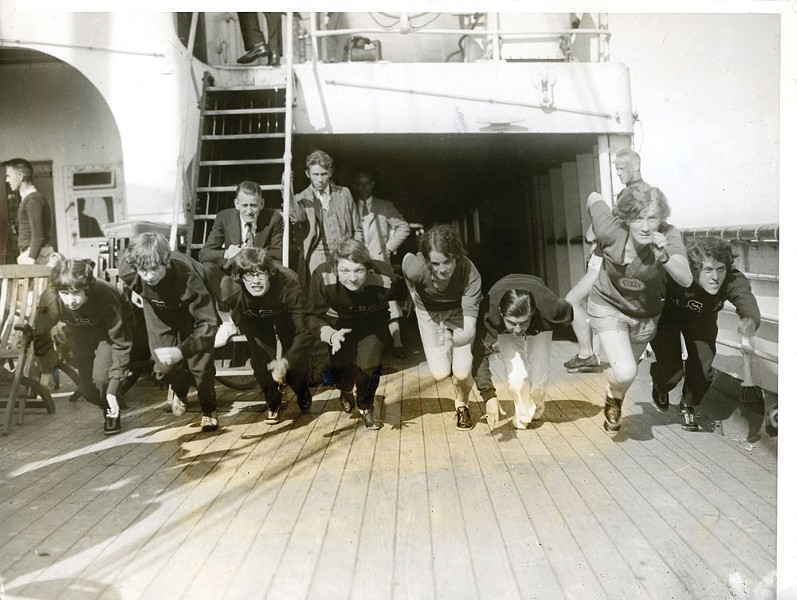 Courtesy of the Clarke Historical Museum Women runners of the US Olympic team practicing on the high seas aboard the S.S. President Roosevelt in 1928. Left to Right: Elta Cartwright, Elizabeth Robinson, Ann Varana, Mary T. Washburn, Olive B. Hasenfun, Loretta McNeil and Edna E, Sayer. Coach Mel Sheppard is seated on the ladder.

Courtesy of the Clarke Historical Museum Elta Cartwright is sitting up front on the right, near bicycle.

Courtesy of the Clarke Historical Museum Elta Cartwright in front of a giant redwood tree in September of 1927.

Courtesy of the Clarke Historical Museum Elta Cartwright, women’s sprinting champion and member of the Olympic team on Jan. 28, 1928.

After breakfast at the Blue Room on the outskirts of Ferndale, my dad was taking me to see a group of turtles his friend Menard Hendrickson had found in a ditch off Frog Alley. I was a little kid but I remember the story my dad told me on the way about Menard's wife, Elta. Her talents were unknown when she was a child but became unexpectedly recognized later. A Cinderella story.

Her name was Elta Cartwright and, as a gangly freckled schoolgirl in Eureka, she got the nickname "Cinder Elta." The competition tracks in those days were made of crushed cinder on clay. Cartwright was fast and she shined as a sprinter on that cinder track. She competed in the beginnings of track and field for girls and women when she was at Eureka High School, then Humboldt State University and then the U.S. Olympic Team.

Women had slowly been making inroads in international competition, and The U.S. Olympic Committee knew women's track and field would soon be included in the Olympic Games. The 1900 Olympics in Paris had included tennis and golf for women, and over the years the committee had added archery, swimming, diving and fencing. In 1928, Amsterdam would host the summer games, which would be the inaugural year for gymnastics and track and field (still called athletics by the rest of the world). The events for women included the 100-meter dash, the 800-meter run, the high hump, discus and the four-by-100-meter relay.

Girls did not have much opportunity to compete in sports back in the day. However, Cartwright became a name in sprinting at Eureka High School due to her teacher Laura Herron, who saw her talent and entered her and other girls' times telegraphically to a central headquarters of the Amateur Athletic Union. The union was starting to look for talent in any way it could. The organizers wanted to build the Amateur Athletic Program and an Olympics team for women. Cartwright sprinted in bloomers her first two years at Eureka High School before switching to shorts.

At HSU Teachers College, she competed in track and field and at one point unofficially tied the world record of 12.6 seconds in the 100-meter dash. In 1927 she won the AAU Championships in the 100 meters on one of her cinder tracks.

Primarily due to her exploits, the National Track and Field Women's Championships took place in Eureka in 1927. The Oakland Tribune described the event as one of the greatest female carnivals ever staged in the U.S. The city of Eureka pulled off quite a spectacle. In a month and a half, led by the chamber of commerce, Eureka renovated the George Albee Stadium and built a beautiful cinder track to showcase one of its own athletes in front of 6,000 fans in a town of 20,000.

Cartwright, known nationwide in newspapers now as "Cinder Elta," trained hard for the following year as the National Championships held in New Jersey would also serve as the Olympic trials, the first for women's track and field. She ran three 50-yard dashes, three 100-meter dashes and the broad jump in the same day at those trials, and won them all. The 50-yard dash and broad jump weren't Olympic events, but the 100-meter race was. The 100 meters was the first event and she won, besting more than 100 qualifiers. She was the first American female athlete to ever make our Olympic team in the sport. That day was the highlight of her career. One newspaper called her the "the best woman athlete in the U.S."

Within a few days, the men and women of the Olympic team boarded a ship for their passage to Amsterdam. On her ship were such stars as gold medal swimmer Johnny Weissmuller, who later became Tarzan in all the original movies. But the trip was Cartwright's undoing. She got violently ill on the passage — only someone who has gotten truly seasick would know the reality. The athletes got off the ship and the Olympics soon began. I talked to her one day during my coaching career as she was getting on in life. She told me her skin had still been a bit green even after hitting the mainland.

Cartwright advanced to the semifinals with a second-place finish in her quarterfinal heat, as did her teammate Betty Robinson, a 16-year-old wonder from Illinois that Cartwright had nudged at the Olympic trials. Cartwright barely missed making the finals but her teammate Robinson made it, winning the gold and tying the world record just in front of a German star. Cartwright was thrilled for her teammate, knowing that on her best day it could have been her.

No one can say Cartwright would have won the whole thing if she was physically at her best, but the medal stand was a real possibility. Robinson was improving at such a dramatic rate for her age, she might have been unbeatable. The thing I cannot figure out though is why Cartwright, certainly at least the second fastest American, was not chosen for the four-by-100 relay team. She was an experienced relay runner. The Americans lost by a mere .4 seconds to the Canadian team. Maybe she was just still too ill. I never thought to ask her as I only became aware of the relay while researching this column. We may never know.

Cinder Elta arrived home by train to a citywide celebration of her accomplishments and started a teaching job in Petrolia within a week. She met her first husband Les Stromberg and in 1932 traveled to Los Angeles to watch the Olympics on their honeymoon. Afterward, they lived in Arcata and she ran a nursery school. After Les died in 1957, she met Menard Hendricksen from Ferndale while traveling in Europe to the Rome Olympics in 1960. They married and moved to the ranch just outside Ferndale. Elta Cartwright Stromberg Hendricksen died in 1991, a very elegant and charming woman. The day I talked to her, she lightheartedly said she loved to travel particularly after plane travel became common.

In 2000, the Times-Standard did an exhaustive study of the 100 top athletes in Humboldt County history. Two of the elite top five were women: Karen Logan and Elta Cartwright. There would have been many more great female athletes but they were never given a chance. Credit is due to the female athletes like Karen Logan and Elta Cartwright who found ways to compete and beat down the paths for future generations, but they could not have done it without the support and initiative of teachers like Laura Herron.

Back in 1959, Cartwright got another first. She became the first female inducted into the Humboldt State Men's Hall of Fame.