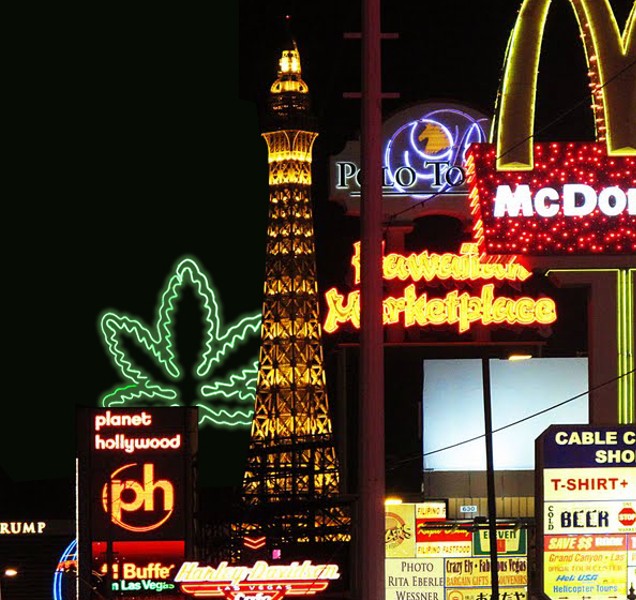 Business owners near Las Vegas' most famous roadway face a unique design review problem: Because of a city-approved "scenic byway" designation, any business located on Las Vegas Boulevard between Sahara and Washington avenues must have a sign that contains 75 percent neon. You know, to maintain that preternatural aura that defines the desert city nights. That stipulation applies to all businesses except, city officials recently decided, medical marijuana shops.

City planners argued that dispensaries should be exempt from the glowing requirements because of the medical nature of the business. One consultant was quoted in the Las Vegas Review-Journal saying, "You wouldn't expect a doctor's office to [have neon]."

But that's the thing about Vegas — the doctor's offices do have neon. During a mid-2000s visit to Sin City, I saw a billboard advertising vasectomy reversals. That such a specific medical procedure would share airspace with impulse/emergency services such as bail bondsmen, lawyers and sex parlors speaks to a demand for services waaaay more invasive than a toke.

The Review-Journal further reported that the city previously denied a "simulated" neon sign for a nearby Walgreen's, meaning they are holding the pharmacy chain to the neon standards. Pharmacies, places where people purchase medicine, are kind of like, um, dispensaries.

Is Vegas trying to tone down the public appearance of pot? Some suggest the big casino owners don't want to risk their lucrative gambling establishments by meddling in still-federally-illegal pot. Or maybe they fear that John and Jane Stoner and their doobied-up entourages are less likely to drop a bill at the blackjack table than the current rotating fixture of alcohol-besotted bachelors and bachelorettes.

Dispensaries are prohibited on the strip proper, which is outside city limits and governed by Clark County. But there are dozens of cultivators, producers and dispensaries in the metropolitan area, according to a map produced by the Review-Journal.

The quieter "Neon Boneyard" north of the strip is where the classic neon flourishes of Vegas live on. And wouldn't pot shops want in on that? If you've been to Canadian or European cities, you've seen that ubiquitous green cross. Neon designers — following in the tradition of blacklight poster artists and glassblowers — could do cool stuff for Nevada pot shops.

Embrace the stoners, Vegas. Maybe there'll be less puking in the streets, and if there's something that can make that toupeed, veloured lounge pianist less sad, you need it.

Vice is reporting that so much of the Emerald Triangle's pot is being shipped out of state that even the Emerald Cup ("the world's longest running outdoor organic cannabis competition," which moved to Sonoma County from Humboldt last year) is having trouble getting quality bud. Contest coordinator Tim Blake told the magazine that the locally grown medicinal marijuana that gets onto the local market is "garbage."

The article says that's because NorCal marijuana is commanding much higher prices in Washington and Colorado, where recreational weed is legal as of this year. Plus, a short growing season and lack of water are adding to the North Coast's shortage of homegrown. The article also implies that light deprivation techniques (which speed up the flowering process for outdoor plants) are contributing to the shortage, but that line of thought isn't clearly explained. It's implied that people who are focused on selling out of state use light deprivation, but, if anything, that should increase overall supply.

"Everyone from out of state comes to the Emerald Triangle to buy weed and ship it home," Oakland dispensary buyer Rick Pfrommer told Vice. "In the dispensary world, we don't see much of the light deprivation stuff because of that out-of-state factor."

Meanwhile, a local dispensary is promoting a light-deprivation contest this year, filling in the void in Humboldt County tournaments created by the flight of the Emerald Cup. Will North Coast growers hang on to enough of the good stuff for the Golden Tarp Awards, or will it all be sold unceremoniously in some far-off state, its origins obscured from regulators and consumers there?

Small Fish in a Small Pond

In the Lab
Top Stories