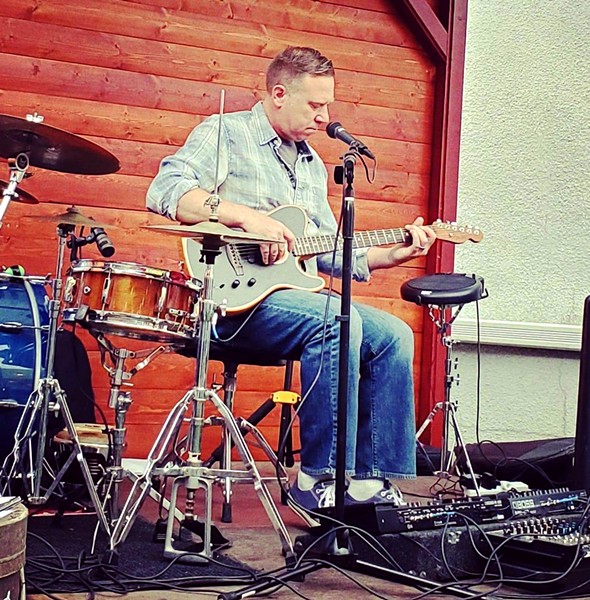 Well, this was quite a weekend, let me tell you. Apparently there was something called a Pisces Moon on Saturday, which is supposed to turn people like myself who have a birthday between Feb. 19 and March 20 into wicked and fantastic werewolves. Or so I am told; honestly I'm so checked out on the calendar I thought the flags everywhere were at half mast because Queen Elizabeth II died and not because of 9/11. Whether you want to believe the astrological implications behind the machinations of the sky, it's fairly impossible to deny the rude and brute power of a full moon, whose effects seem to be felt by nearly every living thing on this planet, plus a few rudimentary physical forces. The material world hums and sighs under the light and pressure of a big moon, even that container ship that got stuck in the Suez Canal in March of 2021 was dislodged in part because of its influence on the king tide.

I prefer to think about moonlight more than moon energy, as I have an old, romantic notion about the stuff (I can't get enough of it) and I've never been sorry to see it. In "The Twilight Woods" by the American weird fiction author and poet Clark Ashton Smith, he tells us, "Here darkening twilight is a sorcery." That's how I feel about moonlight, only without the negative connotations. There's only pure magic in the stuff and I look forward to its monthly iterations.

Some things exist in the live music world as little indicators, signs of life in the musical ecosystem. One of the more reliable of these sonic semaphores is the robustness of a road dog's touring schedule. Some folks out there are like Roger Miller's mythical King of the Road, addicted to the allure of playing their tunes in front of new faces every night. They tend to be eccentric, sui generis types, never designed for mass production. Boutique people. And their music is generally compelling. One such character is Tom Boylan, aka Holus Bolus, a one-man band whose acoustic guitar, loops, vocals and percussion runs form a fun and "big little sound." Check him out today at the Myrtletown edition of Redwood Curtain Brewing Co. for a free gig at 6 p.m.

Many of you are more than familiar with my political alignment and the sometimes graceless way in which I promote it. But believe me when I tell you I have nothing on the hosts of a brilliant podcast called The Dollop, where socialist comedian Dave Anthony tells a fucked up story from American history to his witty and better-natured friend Gareth Reynolds, who is famously coming into the experience completely cold, with no prior knowledge of the topic. What follows is usually an excellent discussion about our brutal past (and present), with a wild incredulity coming across through the humor. The latter gentleman is bringing his formidable stand-up work to Savage Henry Comedy Club, tonight and tomorrow night at 9 p.m. ($20). Come and hear stories about his English mum, his cat Jose, and life in general. Just don't call him Gary.

I am told by my buddy Red, aka DJ Red, that Soul Party at Humbrews tonight at 9 p.m. $5), is the official afterparty for the North Country Fair, and that anyone who participated in the All Species Parade is welcome to wear their critter duds on the dancefloor. What more do you need to know, other than that the other regular DJs, Funky T-Rex, Philly Fresh and King Maxwell will also be holding court? I'll be out of town at a wedding, so try to have some fun for me, please.

Day two of the North Country Fair today, with an appearance on the plaza of a certain two-decade-plus freak-rock act called Datura Blues at 2:30 p.m., a multi-state, long term side project of local music fiend Oryan Peterson-Jones. I hear tell that the rhythm section will even feature two former dudes who used to jam with local psyche-rock monument White Manna, one of whom looks a little like me. (Editor's note: It's totally Collin.)

I've been wanting to write more about Metal Mondays over at Savage Henry but the promoter is a tad on the elusive side. Eric, if you are reading this, please hit me up, I like what you are doing. Thankfully, I was able to score a flier for tonight's 7 p.m. show, which is a multinational headbanger, featuring powerviolence band Noose Sweat from Vancouver, B.C., grindcore act Knoll from Tennessee, and two local groups, doom band Death Doula and the debut show of my friend Darren's band Psyop Victim. Darren's been shredding in Humco for years, and his CV is a who's who of solid metal acts, so definitely come out for this one if you are a metal maniac ($10).

I got a nice email from Jerry Martien over the weekend, a man I've known through my maternal uncle since I was a wee lad. He wanted to tell me about his upcoming reading at the Arcata Playhouse tonight at 7 p.m. but was perhaps a little reticent because the setlist is, at least nominally, about live music. Well, my friend, I assure you that there's always room for you in this column and it sounds like there will be musical accompaniment to your work, courtesy of Fred Neighbor, Mike LaBolle and Gary Richardson. To those unaware of Martien's work, I can assure you he is the real deal, with a pile of chapbooks and musings about this corner of the planet that are nothing short of a treasure. Consider coming through ($15).

Singer/songwriter Sean Hayes is a veteran of the touring life, a folksy and soulful chap who has a modern take on the idiom of acoustically centered, indie music. Tonight at 8 p.m., you can find the troubadour at Humbrews, reaching into his two decades-plus long songbook to entertain the fans ($20).

Collin Yeo (he/him) would like to say RIP to PnB Rock, shot in Los Angeles on Monday. Too many young rappers are getting killed lately, which is heartbreaking.