The foreclosure of the Agape House highlights tenants' vulnerability 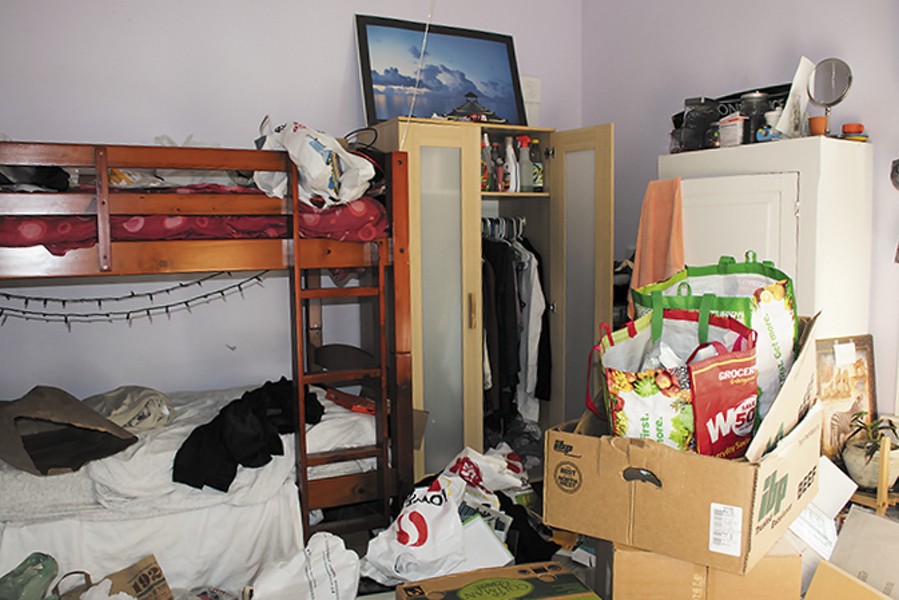 Photo by Linda Stansberry A room in Agape House.

Ligia Giovannoni thought she was doing the right thing. The petite 58-year-old with dark hair and large, dark eyes brought a thick folder of paperwork to her meeting with the Journal on Nov. 15. In it was the deed to her former home at 2145 C St. in Eureka, rental agreements with the women who lived there as tenants of the Agape House, a clean and sober living situation, and restraining orders against her ex-boyfriend, Mark Grabzky. She and Grabzky bought the large, ornate Victorian in 2008 for $401,000, just before the market crashed. When the relationship turned sour and Grabzky moved out, she converted five of its six bedrooms to dormitories and began accepting women who needed shelter. Despite charging around $300 a month in rent per person to the often-rotating group of women, which numbered between 9 and 17 during the three years Agape House operated, Giovannoni struggled to make her mortgage payments. She considered selling the house but didn't have enough equity to get her money back out of it. Then she began doing research.

"All mortgages and all foreclosures are fraud," Giovannoni says, referring to information she says she got from Lighthouse Law Club, a "center for advanced learning" she found online which also states in an "important notice" on the website that the club is "not in the business of providing legal advice, counsel or direction." Giovannoni says, "I started fighting the foreclosure with common law. I had everything on paper to win, everything."

Giovannoni's tenants knew nothing about this. While their landlord went to court, the women who lived in the house continued their daily lives: attending 12-step meetings, going to work, keeping court appointments, meditating, cooking meals for one another, starting impromptu dance parties in the house's large, clean kitchen that often smelled of incense and sage. When a sheriff's deputy knocked on their door Oct. 27, they had no idea that Giovannoni had stopped paying her mortgage almost two years earlier or that the house had technically been sold to the mortgage lender, Fannie Mae, on Feb. 16. According to a recording Giovannoni made with her phone, the deputy said the residents would not be evicted. He reminded Giovannoni to keep her appointment in civil court. This, along with Giovannoni's insistence that all was well, calmed her tenants' fears. But the following week, on Halloween, the sheriff's office returned with bank representatives, giving Giovannoni and the nine women who called Agape House home 10 minutes to grab their belongings and then leave in the driving rain.

It takes very little to establish a clean and sober living house. Unlike drug and alcohol treatment programs or licensed residential treatment facilities, there is no licensing procedure or oversight. According to a 2017 resource sheet from St. Joseph Health, there are around six separate clean and sober housing programs in Humboldt County, with some owners managing multiple properties. Most house residents in dormitories, using shared kitchen and restroom spaces. Residents pay an average of $300 a month in rent, with the money coming from Social Security income or general relief, and their continued tenancy often contingent on maintaining their sobriety. House managers will occasionally drug test residents, and summarily evict those whose results come back dirty. Service providers who rely on clean and sober houses to accommodate clients in need of a stable place to live agree on two things: There are too few of them in Humboldt County and the ones that exist are often neither sober nor clean.

"Some providers are better than others," says Bill Damiano, Humboldt County's chief probation officer. Many of his clients are required to live in clean and sober environments once they're released from jail. "I don't find it surprising that some houses are variously clean and variously sober. My experience is that once you have one person in a house that relapses, they can take other people out with them."

Brian Issa, who heads code enforcement for the city of Eureka, says his department has investigated issues with some clean and sober houses that are repeat offenders, although he declined to say which ones.

"I will say that we have had a fair number of code enforcement cases that occurred at mismanaged clean and sober houses," he told the Journal, adding that he's seen everything from narcotic sales and residents using large amounts of drugs to a lack of home maintenance and piles of garbage. "Like anything else, if they're well managed, it's not a problem."

According to the women who lived there, Agape House didn't have any of those problems.

"It felt like a very welcoming, clean place," says Briana Valdez, who moved there after a situation with a roommate fell through.

"It was safe, clean and well-run, if I can say that," says Cindy Elliot, who served as Agape's house manager, acting as a "den mother" to the women who stayed there. While previous tenants had rotated out quickly, the nine women there at the end had formed a close-knit group. Elliot ended up at the house after leaving an abusive relationship, going through the Multiple Assistance Center and Humboldt Domestic Violence Services before finding a listing for the Agape House on Craigslist.

"I bounced around and around," Elliot says, tears welling up in her eyes. "I lost my safety, and my security. I thought I had found it, finally, but now it's gone. Thank God I am tenacious."

Elliot was able to find work and a roof over her head as manager at another clean and sober house, but says she is "barely holding on" financially. A chief concern for her and the other women is safety. At least one of the former tenants is staying in a halfway house where she doesn't feel safe, describing it to her mother as "cluttered and filthy," and she is keeping her belongings in the trunk of her car to prevent them from being stolen. She would go back and live with her family out of the county but her probation conditions mandate she stay in Humboldt.

When the initial eviction came, Elliot gathered the household, trying to reassure the women and find them a dry place to stay. A friend housed six of them in a studio apartment for a few days. The women went through a resource list, calling every number they could find. They found themselves in competition for the few beds that were left.

"We exhausted our resources," says Jamie, who asked to be identified only by her first name. "I felt an extreme sense of loss. I felt grief and shock. It's nice that we've stuck together."

At least two of the women may rent a room together that they found on Craigslist. Another is staying at a local church. Valdez plans to move back to San Jose. Fannie Mae has offered each woman $500 in relocation assistance.

Giovannoni declines to say where the rent money she took from her tenants went while she wasn't paying her mortgage, but another clean and sober housing operator, who wished to remain anonymous, emphasized that utility bills for a house full of people can be enormous and that very few operators are making a profit. Giovannoni says these expenses alone often topped $1,000 a month. But she insists she is in the right. To back her position, she cites several YouTube videos on currency creation, insisting that mortgages as a concept are false.

"My house is being paid for by my Social Security number," says Giovannoni. "We all have an account, it puts money in my name. Everything is pre-paid. Using this concept, I started my research."

Lighthouse Law Club, one of the websites where Giovannoni went for support, offers a series of membership options for people to join "Mastermind Groups" that enable members to use "the collective intelligence of others." The cheapest option, the "Constitutional Commandos Group," is available for a $1,500 lifetime membership and $49 annual renewal. Giovannoni says she worked with a man she met via this site to help keep her house and paid him money for advice and support. The paperwork he was supposed to help her file, she claims, did not arrive on time. She went to court several times to file paperwork challenging the legality of the mortgage system but says the corrupt nature of the court system — which she says works in tandem with the corrupt banking system — stymied her attempts to fight the foreclosure. Giovannoni, who lived in Argentina when it was under fascist rule, says she simply does not trust the government. Her next step, she says, is to find a civil rights attorney.

"I'm sad for her," says Elliot. "She doesn't seem to be able to see the big picture."