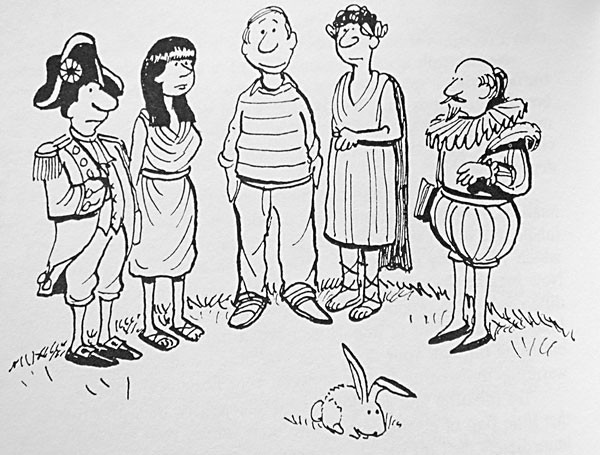 Take a deep breath. Notice anything special? Did you catch a whiff of Shakespeare, a dash of Socrates, a trace of Cleopatra? No? They were there, just the same. You just inhaled millions of molecules which each of them once exhaled.

Let's take a look at just one historic breath: Cleopatra's last. This came, if we're to believe Shakespeare, moments after his second-most interesting stage direction, To an asp, which she applies to her breast. (The best is, of course, Exit pursued by a bear.)

You just inhaled about 20 molecules from her dying exhale. You may have heard such a claim previously, and wondered if it was true -- I'd certainly dismissed it as pure hokum, but I was wrong. In very round numbers: Earth's atmosphere contains 1.6 x 1044 atoms, and each breath we take consists of 8 x 1022 atoms. To get some sense of that last number, if each of those atoms of air were a grain of sand, every breath you took would cover the entire United States to the depth of an eight-story building.

Dividing the number of atoms in the entire atmosphere by those in one breath shows that about 1 in every 2 x 1021 atoms we breathe in the air right here is from Cleopatra's dying exhalation (assuming, reasonably enough, that winds over two millennia have done a thorough worldwide mixing job). This, in turn, means that each of us inhales about 40 atoms -- say 20 molecules -- from her last gasp with every breath we take.

In fact, it's probably safe to say that each breath you take includes air that passed out of the lungs of everyone who has ever lived, at least up to a hundred or so years ago (to allow time for their breath to be sufficiently well mixed in the atmosphere). For someone who died more recently -- say, Elvis -- the mixing process probably hasn't been thorough enough (sorry). But it's a safe bet that your last inhale did include molecules from Plato, Pontius Pilate, Charlemagne, Michelangelo and Marie Antoinette.

So enjoy the company of the rich and famous as you breathe your way through the day.