And big opening weekend sure to have something of interest 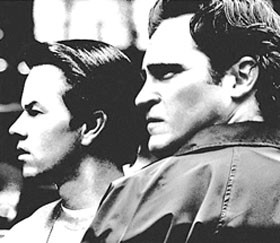 Come back, Charlie Myers! There’s a zillion movies opening this week, and we have neither the chops nor the time to say anything interesting about them. So we’re just going to run through them rapid-fire, and hope that the massive Hollywood marketing campaigns can fill in the blanks.

Assassination of Jesse James by the Coward Robert Ford. In this latest installment of the revival of the Western, Brad Pitt stars as the celebrated outlaw; Casey Affleck is the would-be bandit who worships Jesse just a little too much. Excellent reviews. Rated R. 160 m. At the Broadway.

Into the Wild. Based on the nonfiction best-seller, a young man walks away from the world and into the Alaskan wilderness. Sean Penn directs. Pretty good reviews. Rated R. 149 m. At the Broadway.

30 Days of Night . And then there’s the other film set in Alaska this week. Taking advantage of the long winter nights, a troupe of bloodthirsty vampires migrates to Barrow. Rated R. 113 m. At the Broadway, Mill Creek and Fortuna.

In the Shadow of the Moon . Space documentary featuring interviews with aging Apollo mission veterans, “the only human beings to have stood on another world.” Rated PG. 100 m. At the Minor.

The Comebacks. Which bills itself as a parody of inspirational sports movies. Rated PG-13. 113 m. At the Broadway, Mill Creek and Fortuna.

MICHAEL CLAYTON: It may have been said before, but it’s worth repeating: George Clooney has come a long way from his days as a heartthrob TV doctor on E.R . With director Steven Soderbergh, Clooney created the production company Section Eight, leveraging his charm and good looks — and the financial success that came with blockbusters like Ocean’s 11 (and 12 and 13 ) — to make the kind of pictures that big studios are not typically interested in doing, movies like Syriana , The Good German and Goodnight, and Good Luck .

Michael Clayton is the last project from that now-dissolved partnership, and it’s just the sort of film they set out to make — thought-provoking without being boring, and full of great acting. The thriller was written and directed by Tony Gilroy, whose previous screenwriting credits include all three Bourne spy films, each an exercise in tension. Gilroy also wrote The Devil’s Advocate, the Al Pacino/Keanu Reeves vehicle set in a legal world where lawyers are willing to sell their souls for successful careers. Here, he returns to the boardrooms of high-power law firms.

Clooney plays the title role, a former prosecutor working for a seemingly soulless firm. He’s not a litigator; he’s what they call a “fixer.” His job is to use his connections to make problems go away as invisibly as possible. The main problem he’s assigned to deal with is his old friend Arthur (Tom Wilkinson). One of the firm’s top litigators, Arthur has gone off the deep end (and perhaps gone off his meds) after spending years defending a class-action suit against a company called U/North, a huge multinational agribusiness corporation (think Monsanto) with a biotech product that may be killing small farmers. Is Arthur crazy? Or suddenly sane? U/North’s top lawyer, Karen Crowder (an intense Tilda Swinton), worried about her multi-billion dollar negotiation, wants Clayton to clean things up immediately. When Clayton tries to explain that it doesn’t work that way, she lets loose a corporate black ops team and things get down and dirty.

Clooney is in top form here, crafting a nuanced character. He’s trying to be a good dad to his son (Austin Williams) from a marriage gone awry. There’s a failed attempt at a restaurant that’s left him in debt to the mob. There’s very different relationships with his two brothers — one a cop, the other an alcoholic. These side stories do not distract; they add depth, showing us how a world-weary lawyer gets to the verge of a major life change. Sound dry and boring? It’s not. Don’t forget Gilroy’s Bourne experience. There’s a murder mystery involved, and just enough explosions woven into the plot to keep you on the edge of your seat. It probably won’t be a blockbuster, but comes highly recommended from this reviewer. Rated R. 120 m. At the Broadway and Mill Creek.

WE OWN THE NIGHT: This film is the story of two brothers — Bobby (Joaquin Phoenix) and Joe (Mark Wahlberg). The moral distinctions are as stark as an old Warner Brothers film from the ’30s: Bobby is a hedonistic club owner (read: bad) and Joe is a straight-arrow police captain (read: good). When a drug-dealing crime family becomes entangled in Bobby’s club, the cops ask him to become an informer. He refuses, and his place is raided by his own brother. Of course, his family members are threatened, and he has a change of heart. When Bobby gets sworn in as a cop in the later part of the film it goes from cliche to absurdity, with a portenteous gun battle in a smoky field.

The would-be emotional core of the film is supposed to be the strained relationships between the brothers and their hard-ass police chief father (Robert Duvall), but the characters are such cardboard cutouts that the big emotional scenes just don’t resonate. Apparently the film’s set in the ’80s, though there’s not much to indicate that other than the over the top cocaine intake and tunes by the Clash, the Specials and Blondie.

Director/writer James Gray, who directed Phoenix and Wahlberg in his previous film The Yards , brings nothing to the table we haven’t seen hundreds of times before. The depiction of these uniformly upright cops in New York in the ’80s seems sentimental, simplistic and naive, and the film’s them-or-us stance on the drug war even more so. Even the usually great Robert Duvall seems to be on autopilot here, mainly because the script is so underwritten, especially as regards to Bobby’s motivations and his change of heart.

It’s hard not to compare this movie with David Cronenberg’s recent Eastern Promises , which took a superficially similar story and told it artfully, with scenes of violence that were precise punctuation. This crime film, on the other hand, is a by-the-numbers exercise that was predictable and entirely forgettable. Rated R. 118 m. At the Broadway and Mill Creek.

GOOD LUCK CHUCK. Magic dentist gets all the women he wants, but only once. Then he falls in love — oh noes! Rated R. 96 m. At The Movies and Mill Creek.

JANE AUSTEN BOOK CLUB. Members of an LA book club find themselves acting out the plots of their heroine’s novels. Rated PG-13. 105 m. At the Minor.

MR. WOODCOCK. Man finds his mother has fallen in love with his former high-school gym coach (B.B. Thorton). PG-13. 88 m. At The Movies and the Fortuna.

RESIDENT EVIL: EXTINCTION. Title says it all. Rated R. 94 m. At the Broadway and Mill Creek.

SUPERBAD. Two awkward teen boys — one crude, one shy — set out to excise their boyhood in one night of partying. Rated R. 113 m. At The Movies.

TYLER PERRY’S WHY DID I GET MARRIED? African American version of The Big Chill . Rated PG-13. 118 m. At The Movies.

TRANSFORMERS: A poignant ode to ’80s-era Saturday morning cartoons. Also, a bunch of shapeshifting robots blow each other up. Rated PG-13. 154 m. At The Movies.