White Manna with Howlin Rain, plus Jerry Joseph, Basstoberfest, EOTO, alt. this and that 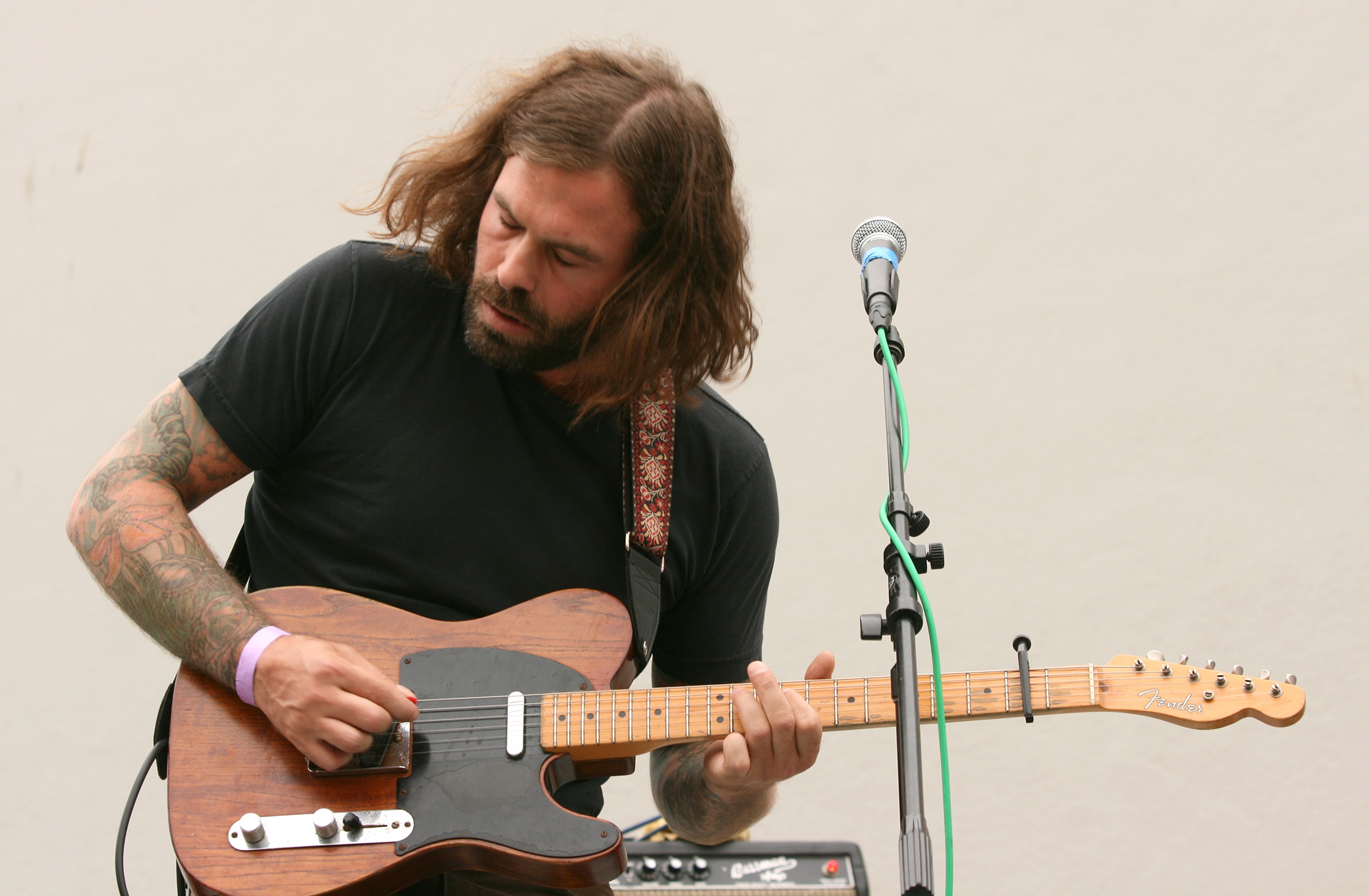 Some band had canceled, leaving an open slot at the very end of the North Country Fair. The winners of a drawing held that day took the stage and unleashed a mighty roar, dark soaring chords shot through with feedback kissing the gray sky. The psych-rock noise machine White Manna was in fine form.

The band first came together 4½ years ago when guitarist/founder David Johnson‎ returned to Humboldt after a sojourn in L.A. The line-up has been somewhat variable. "Johnny Webb has been with the band for four years; he started on keyboards but now plays bass. Tavan Anderson, the drummer, joined three years ago. It's been a core with us three and different guitarists and keyboard players," said Johnson, calling from his home in Manila. Anthony Taibi filled the second guitar slot at the fair and current keyboardist, Dario Marcello, was absent.

This summer the band released an eponymous LP for Portland label Holy Mountain (see review this edition). Another record is in the works at Piet Dalmolen's Universal Balance Studios, with what Johnson said is a similar approach. "It's a little darker now, but it's the same spacy, freak-out rock ‘n' roll. We practiced last night and probably played for 40 minutes without stopping or talking, and it wasn't any song, just improvised." Not that they don't do "songs," but sometimes, said Johnson, "We just close our eyes and see what happens."

Tuesday White Manna launches a brief West Coast tour at The Shanty with Midday Veil, a kraut-rock/psych band from Seattle with David Golightly on synths and Emily Pothast out front on "vocals etc." Former local Ethan Miller's band Howlin Rain headlines with bong rock and liquor store soul tunes from its new album, The Russian Wilds. The Shanty isn't a big room -- show up early to get in. Then when the music starts, close your eyes and see what happens.

Another former local, Jerry Joseph, returns to Humboldt Brews Thursday with his trio The Jackmormons. Joseph left Arcata a long time ago -- in the ‘80s -- he's never stopped writing deep, powerful songs. You'll find some of his best on his new double-LP Happy Book.

Basstoberfest, a "basstacular" EDM show Friday at the Mateel assembled by occasional Journal contributor Travis Turner, features Miles "Womp Womp Wednesday" PsyFi, DJ Dirtbag (aka Tim Marsh) playing with guest MC Kelley Mak, plus local producers Cacao and Piper and live visionary art by Roman Villagrana. All proceeds go directly to KMUD to help pay for a tower upgrade that, according to KMUD, "went waaaaay over budget. (It was the rain's fault, again.)"

When String Cheese Incident percussionists Michael Travis and Jason Hann started up a loopy electronic side project a few years back, they called it "End of Time Observatory." At this point the duo playing live electrojams is simply EOTO. The current "Lotus Experience" tour (so named because of a 3D lotus stage set) comes to the Arcata Theatre Lounge Saturday night.

Moody indie rock quartet Owl Paws is up from San Francisco for a Thursday show at the Jambalaya with local "cougar aphrodisiac rock" trio Strix Vega.

Humboldt alt. folk is in full flower Friday at The Red Fox Tavern with a show called "Let's Folk Things Up" featuring Gunsafe, The Plumb Uglies and Sunshine N Yellabird, three outfits that (coincidentally?) have all appeared on a KHSU feature, A Band About Town, hosted by Disc Jockey Knickerbocky. Also on the folked-up bill: The Wax Catastrophe and DJ Raphael Newdiggs Kroshay.

L.A.-based blues-rock trio The Record Company has a retro sound rooted in American R&B, reminiscent of bluesy ‘60s Brit bands like The Yardbirds or The Animals. Don't hold it against the band, but the marketing plan for its debut EP Superdead is strictly up to date, including placement in a Coors Light commercial and tour sponsorship by Lucky Brand Jeans (which also provided the guys with stylish pants). The Record Co.'s West Coast tour includes a stop at the Jambalaya Saturday with an opening set by The Foggy Bottom Boys, with members of The Bucky Walters and The Nucleus.

Jazz pianist Darius Brotman hosts Third Friday Jazz shows at Westhaven Center for the Arts, typically playing cool bebop with a small combo or on his own (that's his piano at WCA). This Friday he and his guitarist friend Duncan Burgess shift to electronics to engage in what Brotman describes as "sound exploration with multiple delays and effects judiciously deployed using the new generation Casio keyboard." Should be cool, definitely still jazzy.

More jazz that night at Sewell Gallery with The Latin Peppers playing, you guessed it, Latin jazz. Trombonist Jimmy Durchslag from Ponche put the band together and does the arrangements for a variable lineup. This version is a quartet with Tim Randles on keys, bassist Damien Roomets and Orlando Morales on congas, timbales and other percussion.

Straight-up funny hip hop lyricist Macklemore and beatmeister Ryan Lewis bring The Heist tour to the Depot Tuesday, but unless you already have a ticket, forget it. Wednesday, Oct. 24, same HSU location, Brother Ali is here behind his new Mourning In America and Dreaming In Color album with raps inspired by Arab spring and a trip to Mecca (he's Muslim), and by the Occupy movement. Backed by a full band, Blank Tape Beloved, he's joined by guests Homeboy Sandman, DJ Sosa and The Reminders.

In the Civil War variation on "Battle Hymn of the Republic," "John Brown's body lies a-moldering in the grave" (but his soul is marching on). The Boston-based roots reggae band John Brown's Body is not moldering at all. In fact the combo just released a new disc for Easy Star, JBB on Dub, with a half dozen classic dubwise instrumentals plus "The Grass," a fan fave with vocals by JBB founder/frontman Elliot Martin. JBB's long march brings it to Humboldt Brews on Tuesday with Midwestern reggae-tronic dub trio Jon Wayne and The Pain.

Ashland's 100 Watt Mind is based around the longtime collaboration between vocalist Brynna Dean, who has a touch of Janis Joplin in her delivery, and guitarist Skyler Squglio, whose leads harken back to the same psychedelic rock era. Add a rhythm section and you have a neo-classic rock band. Local support for a Wednesday, Oct. 24, show at the Jambalaya comes from The Small Axe, which I once erroneously described as "bluesy." Since the instrumentation includes French horn, bassoon and trumpet (along with the usual guitar, bass and drums), the ensemble prefers the term "orchestral," claiming to be "truly beyond common description" genre-wise. So, to repeat, not bluesy.

And speaking of orchestral, Lost In The Trees, a Chapel Hill alt. folk music collective led by Ari Picker, returns to the Arcata Playhouse Tuesday with a new album, A Church That Fits Our Needs, on a tour with fellow North Carolinans Midtown Dickens and songwriter Dana Buoy.