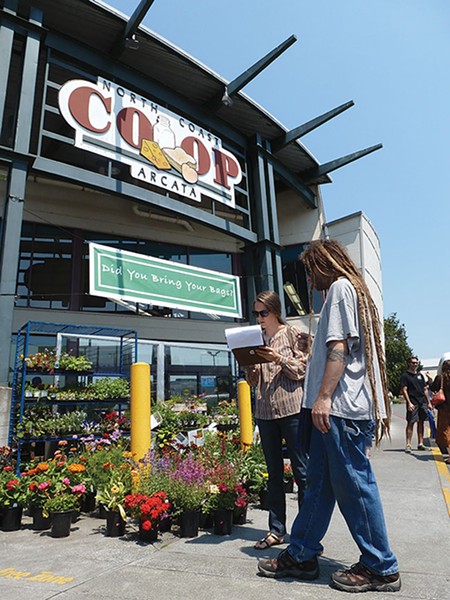 Management and employees of the North Coast Co-op are locked in the most contentious labor negotiations they've had in years, and each side is grasping for leverage with the tools at hand. For management that means enlisting the help of Bradley W. Kampas, managing partner of the high-powered law firm Jackson Lewis, which specializes in labor law and union negotiations. Kampas has been on retainer since Co-op employees first unionized 13 years ago, but this is the first time since the original union contract was signed in 2001 that he's flown up from his San Francisco office to participate directly in negotiations.

Employees, meanwhile, are enlisting Co-op customers in the fight. Last Saturday, a handful of workers gathered in front of the Arcata store and greeted shoppers with clipboards, petitions and free shopping bags emblazoned with pro-worker messages from Local 5 of the United Food and Commercial Workers Union. The petition asked shoppers to pledge support for workers "in their fight to maintain affordable healthcare and living wages ... in the face of unprecedented profitability and productivity."

John Frahm, a former Co-op employee who now leads the union's local bargaining committee, said every contract negotiation with the Co-op has been a challenge. "But this time it's definitely different" — partly, he said, because of the presence of Kampas, whose firm has been characterized as a union buster, and partly because of management's initial proposal. In a July 19 memo to union members, Frahm said it was "unlike any proposal the committee has seen before in negotiations with the Co-op."

He listed details in bullet points, including: a 12 percent decrease in wages for most workers, higher health care premiums and deductibles, reduced dental coverage and stricter attendance policies.

"It was kind of a huge slap in the face," said Kevin Lennox, a grocery clerk at the Eureka store who makes $12.20 per hour after seven years with the Co-op. Lennox is part of the union's bargaining committee, and he was among the eight or so employees gathering signatures on Saturday. With a wavy flop of hair, wraparound shades and salt-and-pepper stubble, Lennox greeted everyone with a smile.

The starting wage for Co-op employees is $8.60 per hour, and within a year they're up to $10 an hour. That's more than, say, fast food workers make but less than the wages at local Rite-Aid and Safeway stores, whose employees are represented by the same union. And according to Frahm, Rite-Aid and Safeway offer health care coverage that's "light years ahead" of the Co-op's.

While Lennox's pay is well above the state's $8-per-hour minimum wage, he said he wouldn't consider it livable for a single parent, and just borderline for someone living on his or her own. Fortunately, his wife works at HSU, so together they have enough to provide for their two kids. And while he doesn't take advantage of the Co-op's health care plan (he's covered through his wife), Lennox acknowledged that it's a good one. For now, anyway. Unionized employees — of whom there are almost 150 between the two stores — are currently working under an extension of the previous contract, which expired June 30.

Co-op General Manager Kelli Reese, who took over for retiring GM David Lippman at the beginning of the year, declined to be interviewed for this story, but late last week she issued a press release offering management's perspective. It said the Co-op has a longstanding and positive relationship with the union and that the two sides have already reached tentative agreements on a number of issues.

But the numbers cited in the press release seem to contradict those in the union's memo — as if each side had been attending different meetings. According to the release Reese sent, the Co-op's opening wage proposal was for a 1 percent annual increase over the three-year term of the contract, and the release said, the union's opening wage proposal of about 10 percent a year was "neither reasonable nor sustainable."

So which side is telling the truth? Probably both: It's just a matter of how you portray the math. Co-op employees work under wage scales, getting periodic raises after they've worked a certain number of hours. So while management did offer an annual raise of 1 percent, that's significantly less than the 5 percent annual raise employees get under the current agreement.

But don't get too caught up in those numbers. Typical of such negotiations, neither side expected to get what it asked for in its initial proposal. Management's press release admits, "We have room for movement." And Lennox was even blunter. "None of those numbers are real numbers," he said. In other words, both sides bluff, feeling each other out as they inch toward middle ground.

As those negotiations progress, employees may have some extra bargaining chips nestled in the financial books. The Co-op's profits and losses have fluctuated in recent years. For example, it lost more than $113,000 in the fiscal year ending in March 2011 but managed to turn things around the following year, earning a $25,000 profit. It accomplished this partly by reducing staffing nearly 20 percent, according to Frahm, the union rep.

This year, things are looking even better. In the Co-op's March newsletter, Chief Financial Officer Kelli Costa announced that sales were up 3.3 percent and net income for the first three fiscal quarters had increased by more than $383,480 over the same period last year. And in the July newsletter Reese announced that sales were up in Arcata by 5.4 percent and in Eureka by 8.7 percent.

Union negotiators says those profits prove that workers are being more efficient, so they deserve to get a better offer. No doubt managers and their attorney have some numbers of their own. Negotiations are continuing this week, and while both sides say they're optimistic about reaching an agreement, Frahm said there's no telling how long it might take.