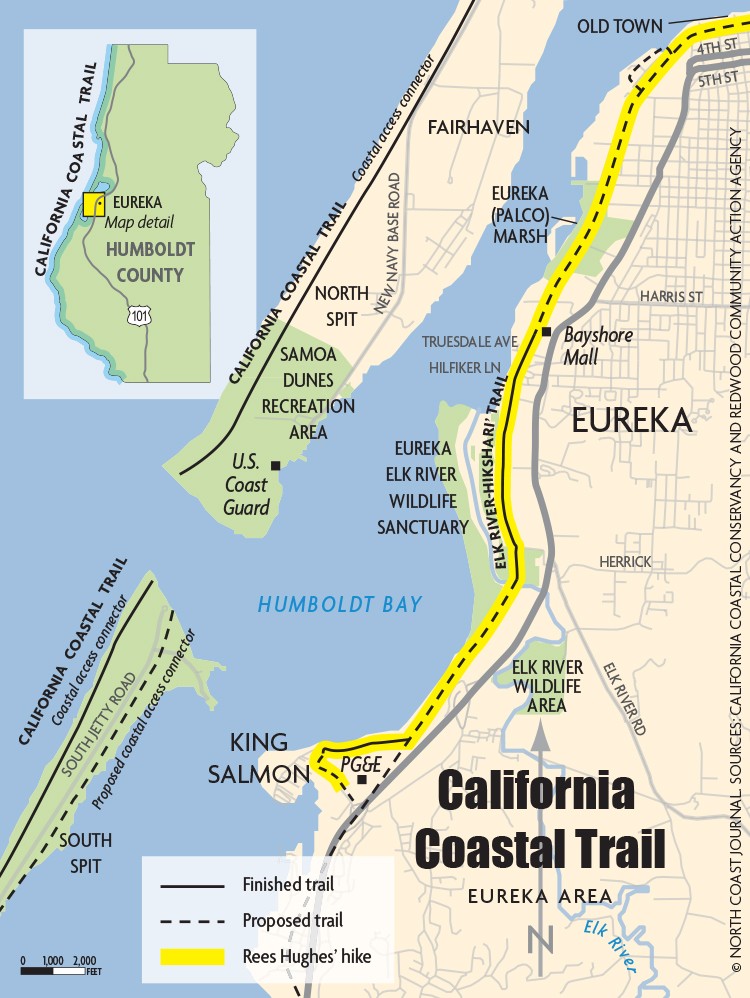 Over the years I have walked as much of the Humboldt County Coast as possible. The extraordinary wild and windy Lost Coast is the equal of any coastal walk I have taken anywhere in the world. It combines solitude with stunning landscape and incredible intertidal shoreline. Not far behind is the Carruthers Cove to Skunk Cabbage Trail via Gold Bluffs Beach walk. And then there are the miles and miles of unbroken beaches past the lagoons, the more populated and recognized destinations like Clam Beach, Mad River Beach and Centerville Beach, and our forgotten gems like the South Jetty on to Table Bluff and the mouth of the Eel River. With a little planning, there are countless opportunities to enjoy a day on the California Coastal Trail.

I spoke with Emily Sinkhorn, who works for the Redwood Community Action Agency and has been involved in a number of California Coastal Trial projects, about sections that I may have bypassed or that illustrate some of the gaps in the trail going south from Arcata. I asked the same question of Aldaron Laird, a local environmental planner who has surveyed every inch of Humboldt Bay. And the Coastal Conservancy's Peter Jarausch. They all suggested that I walk south from Old Town in Eureka to Fields Landing and explore the NCRA railroad right-of-way north and south from the Tompkins Hill Road underpass. I added the South Jetty to the itinerary, since it has been years since my last visit. The Eureka to Southern Humboldt Bay passage represents one of the more significant gaps in the Humboldt County portion of the coastal trail. Like the primary strand of the proposed Arcata to Eureka coastal trail, it relies heavily on a deteriorating right-of-way and the cooperation and flexibility of the North Coast Railroad Authority (NCRA).

In my efforts to recruit a walking partner, I felt that full disclosure was necessary. "This is uncharted territory for me," I confessed. Protective clothing? Clippers? Machete? Beats me. We could probably get a bite to eat at the Loleta Bakery. We'll be gone all day. At this point, there was only one hand still up; my faithful compatriot in many projects, Dennis.

We planted one car in King Salmon to avoid the extra mileage required to retrace our steps. It had been a clear, crisp night, and only as we positioned the second car in Old Town was the sun beginning to lift the temperature. We passed the familiar landmarks of the small boat basin and the "balloon track" and the Schmidbauer Lumber facility. We paused to watch a river of wood chips flooding an immense barge from a towering system of conveyors. Later we would see the laden barge crossing the bar from the vantage point of the South Jetty. As we proceeded south, we entered the netherworld of the Eureka Marsh (formerly known as the Palco Marsh). This half mile DMZ is still littered with the detritus of broken dreams and the hard life on society's margins.

But once you cross the parking area behind the Bayshore Mall, it is like you have landed in Oz. The paved 1.5 mile Elk River Hiksari' Trail begins at a first class trailhead, complete with bathrooms and parking, at the west end of Truesdale. The trail, which was opened in June 2012, offers a unique view of the Bay until it curves southeast along Elk River. It was gratifying to see that stretch of trail so well used, and it gives me hope that money the City of Eureka has allocated for extension of the trail through the Eureka Marsh will result in its resurrection, too.

We left the shiny new trail for the more primitive NCRA railroad right-of-way as it crossed the Elk River and paralleled the bay shore all the way to the PG&E generating plant. Following a rough trail through two open gates, we were deposited in Humboldt County's little Venice, the water-logged community of King Salmon. King Salmon, at three feet above sea level, was constructed in 1940 by dredging boat channels from a bare sand spit and the mud that was once the site of Humboldt City, the short-lived first settlement on the bay founded by H.H. Buhne in 1850. With its canals and easy access to the bay, King Salmon was touted as a haven for fishermen from all over the United States (hence the street names of Herring, Sole, Cod, Perch, Halibut, and Crab). That dream has never been fully realized. More likely, King Salmon will be among the first casualties of sea level rise. Dennis and I enjoyed the panoramic view of the bay from the short climb up Buhne Point, and drank hot chai at the Boat House Expresso Bar before we reclaimed the car and headed on south.

Our brief foray into King Salmon served as a reminder that the California Coastal Trail is routed through and around history: The lighthouses at Punta Gorda, Cape Mendocino and Trinidad, the wagon route along the beach south of Centerville, the old Hammond Railroad used to ferry redwood logs to the mills on Humboldt Bay (now the Hammond Trail), and the mining at Gold Bluffs.

We investigated the railroad right-of-way that shares an underpass with Tompkins Hill Road, looking for a primitive path either direction. A few deer tracks, a derelict RV and flourishing impenetrable undergrowth were all we found. Life felt too short to take this on. We drove on south past the College of the Redwoods, trying to decipher the location of the suggested coastal trail route. There were a few hints here and there.

After a Loleta Bakery lunch and some purchases at the Meat Market (enough to make sure we remained neutral in the recent controversy), we drove over Table Bluff and down to South Spit. With its unexpected dips and holes, the drive to the jetty was not that much faster than walking. We parked. We walked along the breakwater and again turned south. What an amazing winter day. There was real warmth in the air. The seas were flat and the air calm. And the beach was amazingly desolate for being so nice. This, too, was considered a strand of the California Coastal Tail, and it continued down to the mouth of the Eel and beyond. So was Copenhagen Road to Loleta and beyond. The coastal trail in this area is not unlike the top of a frayed rope, with multiple options each with its own problems -- overgrowth, excessive and dangerous traffic, impassable water crossings and private land, to note a few.

As we headed home, I couldn't help but remember Emily Sinkhorn's assessment of the California Coastal Trail in Humboldt County. "It is really complete in the north and the south [of the county] but it is the connecting between communities that must be the focus now."  Solutions moving forward, she continued, "will happen through collaboration." With the exhaustion of Prop 84 (2006) bond resources, partnerships and local funding support will be key. We have a community asset that is within reach of being extraordinary.

It has been more than four decades since the people of California passed the coastal initiative ballot measure that, in the words of Coastwalk founder Bill Kortum, was "an expression of devotion to this magnificent coastline, the commons for all of California." After taking my recent walks, I realized more than ever the importance of keeping that dream alive and well on the North Coast.