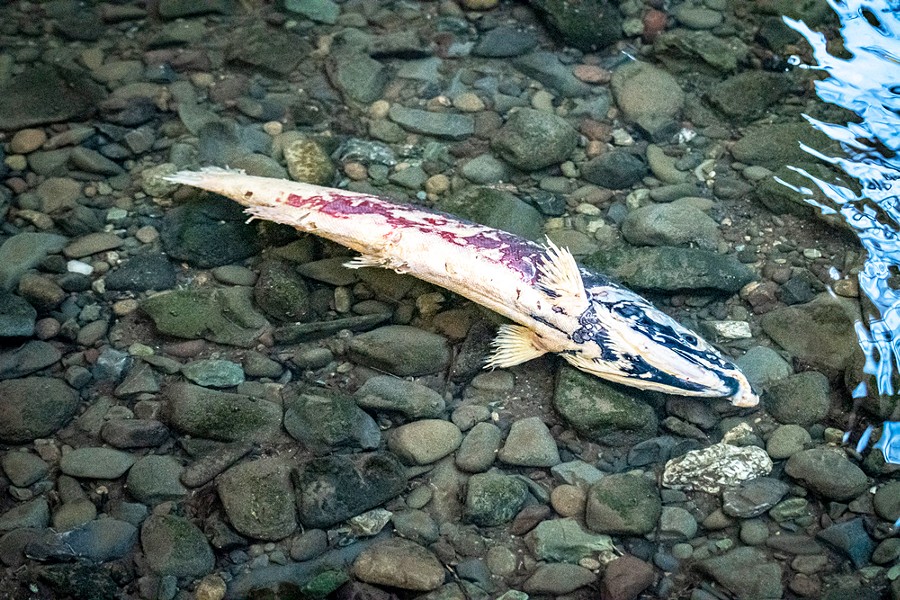 Photo by Mark Larson A spawned out coho salmon floats in the shallows of Jacoby Creek along Quarry Road just under the bridge. Its body shows the worn out gills and deteriorating flesh caused by the spawning activity at end of life and the effects of returning to fresh water from the ocean.

Years ago, I was standing in an Alaskan stream with a flimsy fishing rod, trying to catch a spawning salmon. I had pedaled about 9 miles from my place of work, one inlet over on the famed Inside Passage, a small plastic bag sitting weightless in the pannier of my bicycle. I had a pocketknife, a vague understanding of how to clean a fish, and a romantic idea of catching dinner and bringing it home on my bike. The fish swam nearly shoulder-to-shoulder in the stream, fighting their way upstream with deteriorating bodies. I hooked one on the dorsal fin, feeling pangs of error and naiveté as I reeled it in sideways. I looked at the struggling fish, its scales disintegrating into the water, and let it go, apologizing profusely. I was not a fisherwoman and at this rate I never would be, but my ignorance-turned-awe of the salmon life cycle started here.

Since my botched casts 13 years ago, I've talked with guides and experts, scientists and true fishermen. I learned the five types of salmon — chum, sockeye, king, coho, and pink — as well as their respective traits and incredible life cycles. I learned about the connection Pacific Northwest tribes have to these animals, which have been central to culture, economy and spirituality since time immemorial.

The northern hemisphere is now technically in late winter, despite the bizarrely warm temperatures that have me contemplating sunbathing. This is the time of year when the very last of our anadromous coho relatives travel upstream to their birthing grounds to reproduce. Most of the spawning occurs from November to January, but a few dozen stragglers have been counted recently in Prairie Creek, says Colin Anderson, North Coast District fish biologist with the California Department of Fish and Wildlife. Females dig pits a few inches deep in firm gravel with their tails before laying a few hundred eggs in a nest, or redd. Males then fertilize the eggs with their milt, the fluid containing the sperm. On this fine February day, eggs sit in redds waiting to emerge.

After laying and fertilizing the eggs, the adult salmon die, spent from their journey and their efforts. Salmon are a keystone species due to the large impact they have on other life in relation to their size and abundance. A decomposing salmon carcass releases nitrogen, sulfur, carbon and phosphorus, feeding the soil, insects and trees of the forests. The insects that benefit from these dead salmon will eventually be eaten by the next generation, thus adding one more thread of strong silk in the web of ecology.

After six or seven weeks, the eggs will hatch but remain immobile in what is called the alevin stage of life. To be honest, they are pretty cute during this phase. To see for yourself, take a peek at a short US Fish and Wildlife Service video of coho hatching (www.youtube.com/watch?v=dnX4ZKvYTHs). Later this spring the coho will leave the redd and spend one or two years in their natal freshwater stream, using estuaries, side channels and floodplains to find food and hide from predators while they gain size and strength before swimming to the ocean. This part of the life cycle is unique to coho. If they survive their next one to three years in saltwater, they return to continue the cycle.

Coho are also exceptional indicators of healthy ecosystems, since they require both high quality stream habitats with cold, clear water and healthy sea conditions. Population estimates in Northern California from the 1940s range from 150,000-400,000. However, today's numbers show a sharp downward trend, with 10,000 or fewer today, according to North Coast Coho Project Director for Trout Unlimited Anna Halligan. Loss of habitat, overfishing, early logging practices, changing ocean conditions and increased water use by humans have all contributed to the population decline. We have population data for the past 20 years but with three-year life cycles, that's not very many generations, and we still cannot know if the salmon are truly recovering.

The Northern California Coast population of coho salmon was listed as threatened in 2002 under the California Environmental Species Act. Despite this status, according to Terry Roelofs on a 2016 episode of KHSU's Sound Ecology program, "We still have fish in our local streams — the Elk River, Jacoby Creek, Freshwater Creek — still get up to several hundred of these adults coming in to spawn." He continues, "Their ability to return to their native streams is part of the life history and success of these animals, but some of them don't go back where they started, and that's really important in terms of recolonizing areas that have not been available .... Like everything else in nature, these animals don't put all their eggs in one basket and they have multiple strategies for dealing with the changing environment, the key to long term survival."

If you are lucky enough to see a spawning salmon in Humboldt County, wish him or her well and success in their endeavors.

Hollie Ernest (she/her) is a botanist and forestry technician. She is writing a book about her international bike adventures, gardening and exploring the corners of Northern California. Follow her on Instagram @Hollie_holly.