Cold Water by the Numbers 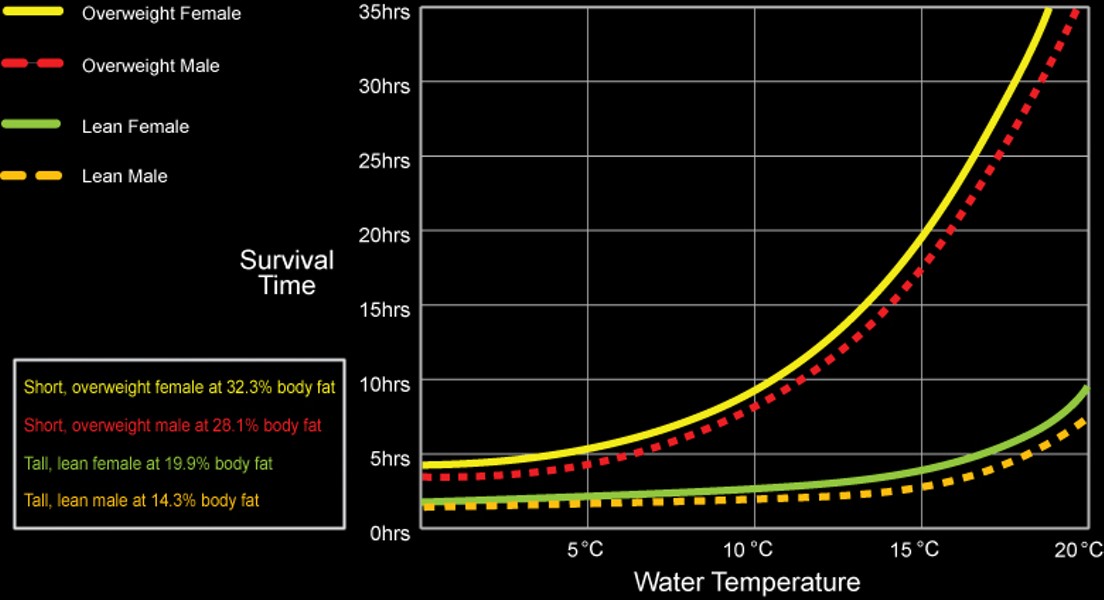 You'll find us kayakers all over the place in this part of the world -- bouncing down the Mad or the Trinity, cruising on the Bay, playing in the rocks around Trinidad harbor. While we all have our favorite type of boat, paddle and other equipment, one thing we can all agree on is our life jacket, or PFD (Personal Flotation Device). In the event of immersion in cold water, that's the one piece of equipment that decides, more than any other, whether we live or die.

Contrary to popular belief, most cold-water deaths are not caused by hypothermia. In our typically 48-degree F (winter) to 62-degree F (summer) waters, it takes several hours for hypothermia to kill you. But most fatalities occur much faster, usually within the first few minutes of an accident, even though about 60 percent of victims are good swimmers. Tragically, two-thirds die within 50 feet of safety. The reason can be summarized by three numbers: 1-10-1. This "phrase" was coined by Dr. Gordon Giesbrecht, head of the Laboratory for Exercise and Environmental Medicine at the University of Manitoba, where one of his interests is survival in cold water.

1 -- Cold Shock. Your initial reaction on falling into cold water is to gasp deeply, followed by hyperventilation. During that first minute (that's the "1") you can easily inhale and choke on water, so it's essential to keep your airway clear by avoiding panic and getting control of your breathing. If you survive that initial minute, you can look forward to ...

10 -- Cold Incapacitation. Over approximately the next 10 minutes, you'll lose the effective use of your fingers, arms and legs, so make the most of this short period to try to rescue yourself and/or attract the attention of potential rescuers. After this, you won't have the strength to move very much.

1 -- Unconsciousness from hypothermia. In 50-60 degree water, this can occur in as little as one hour (the "1") to two hours or more. Death, however, takes much longer (see chart).

The point is that even though you're in the water, cold and helplessly immobile, you'll be rescuable for a decent length of time so long as you can breath. And you can breath if you're wearing a PFD, which keeps your face out of the water. We kayakers are pretty religious about wearing PFDs, but many boaters are not. According to the Cold Water Boot Camp website, only 12 percent of the 130 boaters who drowned in Canada in 2004 were wearing life jackets properly. Why don't all boaters wear PFDs? One common reason given is that they restrict movement. I used to think that before I discovered self-inflating vests, which are lightweight and barely noticeable when I'm in my kayak. A sharp tug on the cord opens a small CO2 canister, inflating the vest in a second.

But the main reason boaters give for not wearing a life vest is, "I'm a good swimmer!" If that's you, remember, no matter how great your swimming ability, your body is still subject to that one minute of cold shock, after which you've about 10 minutes to get to shore or onto a boat. And then ... you'll essentially stop functioning in Humboldt's chilly waters.

Barry Evans (barryevans9@yahoo.com) is feeling guilty writing this when he could be out on the bay. The book of his first 80 Field Notes is available at Northtown Books and Eureka Books.