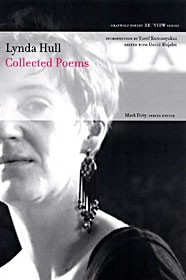 On a recent brief flight from Monterey to San Francisco, a woman who sat next to me noticed me reading Lynda Hull's Collected Poems and asked what Hull's poems were about. "Her poems are not really about anything in particular, yet they are about everything," I answered. "Her strength is her description and use of metaphor — dense, thick, brilliant."

Though Lynda Hull's Collected Poems first appeared last year in 2006, reporting on this stunning poetry collection is appropriate — a new discovery, like much of poetry in general. In poetry, the title "collected" tends to indicate that poet is either dead, seriously ill or old. Tragically, Hull died in a car accident in 1994; she was 40 years old. By the time of her death, she had published two collections of poetry, Ghost Money (1986) and Star Ledger (1991), which won the 1991 Carl Sandburg Award. Her collection The Only World was published posthumously, in 1995.

It's shocking how complete, how precise, how powerful, how good her poetry is, based on only three books of poems. She allows you into her world, her observations, her perceptions, her stories. The result is a collection of extremely vulnerable, bare, raw poems, executed in a thick, dense language that recalls Hart Crane (she allegedly memorized Crane's "The Bridge"). Hull, at the age of 16, with a scholarship to Princeton, ran away from home (Newark, N.J)., and for the next 10 years she knocked around various Chinatowns up and down the East Coast with her then-husband. She also developed (and successfully kicked) a drug addiction. In 1982, she completed an undergraduate degree at the University of Arkansas at Little Rock, where she met and married her second husband, poet David Wojahn, who is also the editor of this collection.

Hull often refers to jazz musicians in her work, figures such as Django Reinhardt (in "Charmed Hour") and Chet Baker (in "Lost Fugue For Chet," which is both heartbreaking and redemptive), while she plays with rhythm and line breaks — appropriate to the poem's subject. What are her poems about? Well, they are about desolation, loneliness, pain, beauty — and small epiphanies. They're about the depth of life.

Mark Shikuma is a local poet.