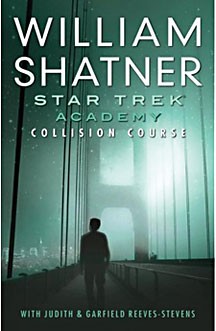 Book by William Shatner with Judith and Garfield Reeves-Stevens.

A year from now a new Star Trek movie will be hitting the big screens, featuring new young actors playing Captain Kirk, Mr. Spock and the rest of the original series crew, in a prequel to the TV series. J.J. Abrams (creator of the TV series Lost and director of Mission Impossible III) is in charge as producer and director. Though Leonard Nimoy appears as Spock once more, William Shatner isn't in the movie, and he's not happy about it.

But for those who can't wait, Shatner's created his own prequel story, though one that goes further back than the reported time period of the movie. In Collision Course, we see Kirk and Spock meet. And like screen couples are supposed to do, they meet cute. Kirk is a brash teenage rebel who despises Starfleet. Spock is the pampered but conflicted adolescent son of a Vulcan diplomat. They collide, literally, in a place neither have gone before: a bar in San Francisco.

And no, they're not cruising. Jim is trying to clear his Starfleet Academy cadet girlfriend of false charges, while Spock is investigating thefts of Vulcan artifacts from their embassy in Sausalito. Their separate adventures soon merge, and events take them to Starfleet Academy and into space, aboard — what else — the starship Enterprise, to confront suppressed elements of Kirk's dark past.

The story is full of twists, and it gets pushed several times towards the implausible, but always gets pulled back to become another surprising adventure. It's skillfully told, with clean, swift prose. The dialog crackles, and you can hear both the youth of those familiar voices, and those familiar voices themselves.

As often in Trek, there's a contemporary ring to this futuristic tale, as this story brings painfully alive the contemporary tragedy of child soldiers in Africa and Asia. And the moment that young Kirk finally embraces his Starfleet destiny is one of several that exemplify another feature that Trek fans love — those moments of meaning that elevate this saga above most popular sci-fi. "If we remember the patterns of history, we do not repeat them," Kirk realizes. "What do you mean by 'we'?" he's asked. "Starfleet," Kirk replies.

If you've read Star Trek novels (I find them perfect for keeping my slightly numbed mind occupied on airplane trips) you'll recognize the convention of expanding on elements of the Star Trek universe established on TV and in the movies, and particularly revisiting characters who may have appeared in only a single episode. There are several such cameos here, but the most interesting revived character is Jim Kirk's older brother, George. Barely mentioned in the series, he's seen here as a road-not-taken version of Jim. This helps give the future Captain some dimension, so this becomes a story of adolescents finding themselves that requires no special knowledge of Star Trek.

Shatner's writing partners, Judith and Garfield Reeves-Stevens, have written fiction and nonfiction much respected by Trek fans, as well as other genre novels, TV scripts and nonfiction on military matters. So while they're meticulous about Trek details, they include the kind of boot camp and Academy scenes that hark back to novels about West Point and Annapolis that were "boy's books" staples from the 1920s to at least the 1950s. So there's double the nostalgia, within a smart and sometimes witty tale for any generation.

William Shatner has written several Star Trek novels with the Reeves-Stevens — in fact, it's a kind of sub-genre, creating the "Shatnerverse" that starts with the established Trek universe and goes its own way from there. This novel is self-contained but designed for at least one sequel. However, Shatner has expressed his unhappiness with how Pocket Books is promoting it, and suggests he may not write another. Whether this will prevent the Reeves-Stevens from taking the story forward is, as Spock would say, "Unknown, Captain."