Dar Williams, plus a stellar sax and kora combo, Pretty Lights and Vidagua 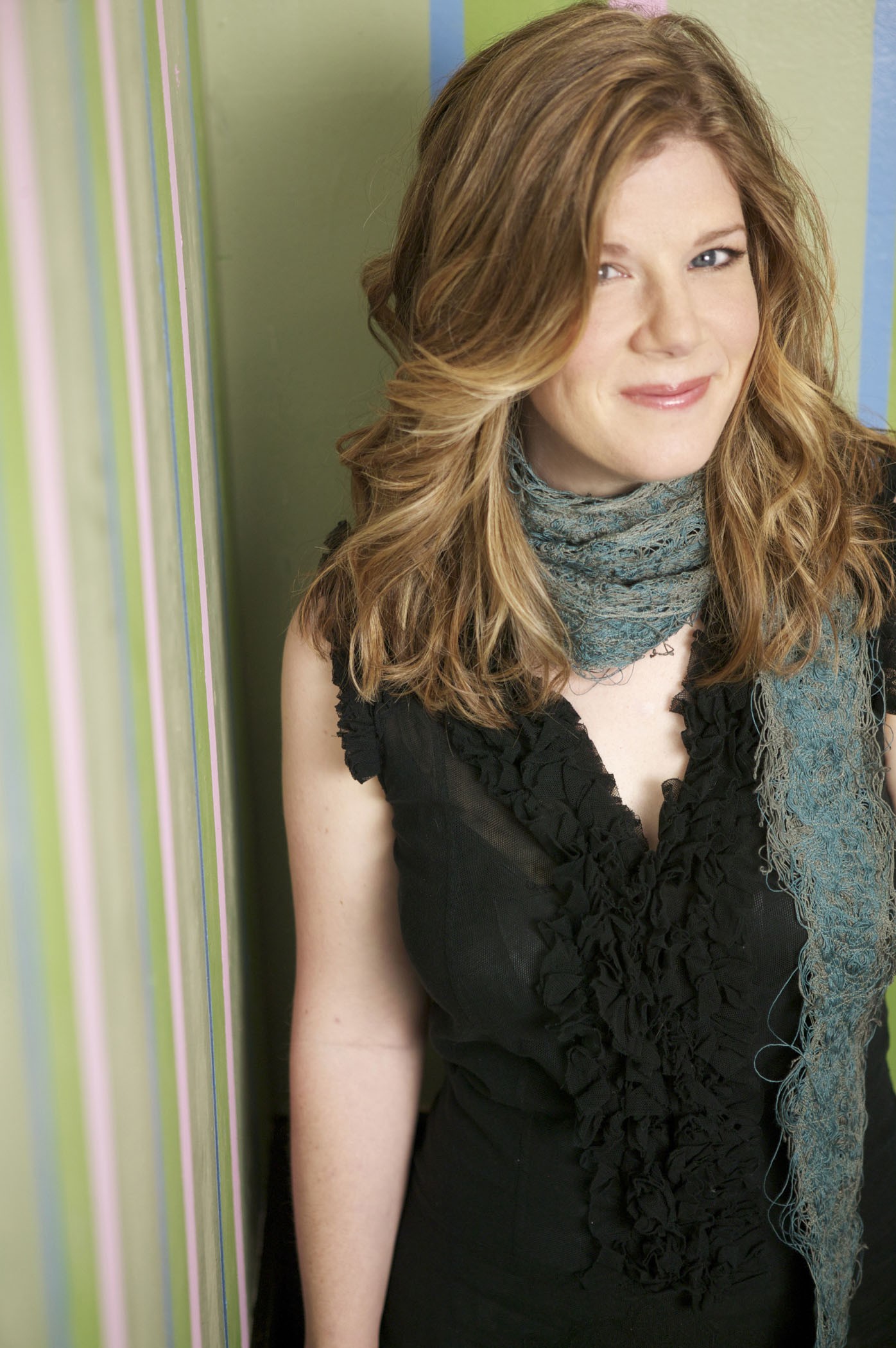 About a month ago songwriter Dar Williams released her latest album, a retrospective collection titled Many Great Companions. The companions are her songs, and friends like Patty Larkin and Mary Chapin Carpenter who supply harmonies on some of her tunes. But the companionship is more than that, says Williams, "I've had a very social career, worked with a lot of people, played for great audiences. People assume that the music comes out of something quiet and silent, me sitting alone working, but the truth is I don't think I could have done it without the constant support and feedback from a lot of people."

Williams also sees herself and part of a community beyond the music world. She lives with her husband and a couple of kids an hour north of New York City in Beacon, NY, where among other things she helped put in a community garden. Eating right is important to her. While touring in the '90s she assembled The Tofu Tollbooth, a directory of natural food stores and restaurants.

"Arcata has one of my favorite co-ops in the country," she noted when I mentioned where I was calling from. "The rest of the country is kind of catching up with Arcata," she said, waxing nostalgic about the week she spent here. "And it's not just food, it's energy and transportation issues -- communities." However, that's not the sort of things she writes songs about -- they're little stories about people like the hippie babysitter in "The Babysitter's Here," the Jesuit priest in "I Had No Right" or the androgynous girl in "When I Was A Boy."

"It's nice. I get to explore all my ideas and my true alter ego through music: stuff about aging and mortality, betrayal and love. I get to go there with my music. Then when it comes to plugging into the kind of stuff that builds our civilization, I do that directly. It's a nice balance. I don't find myself wanting to write verse about solar power or things like that." (She does, however, write an eco-groovy column for the Huffington Post on topics like pedal power and using municipal water pressure for hydropower.)

Was it hard choosing the "hits" for the retrospective? Not at all, she says. She knows what her fans like. "They shout out the titles when I'm playing. It's very direct." Got a favorite? It's likely she'll sing it when she comes to Humboldt Brews Thursday (Nov. 18). And you don't actually have to shout it out.

How did New Orleans-born saxophonist Charles Neville (of the legendary Neville Brothers) end up playing jazzy counterpoint to Senegalese kora player Youssoupha Sidibe? "He was living in Northampton, western Mass. -- that's where I live now," said Charles in a call from Nevada City, where their first-ever tour was about to begin. "We met through a mutual friend and decided to get together and do some experimenting and see how it worked. I really liked that experience and after some fooling around we went in the studio and recorded the Tree of Life CD." The result: a series of gorgeous meditative improvisations, a far cry from the jazz and New Orleans funk Charles is known for. "I'm not approaching it from some technical stylistic standpoint, just from the spirit of the music, the feeling that's in it. I just try to mesh, improvise off what he's doing -- he's improvising too and we feed off each other and follow the energy."

While meshing will continue, the musical setting will be somewhat different when Charles and Youssoupha play at Humboldt Brews Saturday night: They'll be joined by Youssoupha's occasional rhythm section, aka the Mystic Rhythms Band, known for throwing reggae beats into the African rhythms. How will Charles mesh? When we spoke last week he was not sure. He'd just arrived in Nevada City and had never met the bass player and drummer. "Whatever it is, it's gonna be good. I'll feel what they're doing and make what I play fit in somehow."

Derek Vincent Smith started out as a Colorado hip hopper, then discovered the rave scene and merged his hip hop beats with electro and became Pretty Lights. Working with Ableton Live and a live drummer (most recently Adam Deitch), he's a master creating relaxed yet insistent dance mixes with eclectic samples drifting in and out of focus as the beat rolls on. He's taken various scenes by storm, playing Bonnaroo, Rothbury and Coachella along with dance clubs large and small. Sunday he returns to Humboldt for a World Famous show at the Arcata Community Center along with equally eclectic DC electro artist Thunderball, touring behind a new release, 12 Mile High, and funky electrojammer Gramatik from Slovenia.

Along similar lines, PANTyRAiD, a duo with Martin Folb (aka MartyParty) and Josh Mayer (aka Ooah) laying down melodic beat-heavy dubstep at Nocturnum Friday night.

Reba of That's How We Roll celebrates her birthday Thursday at the Red Fox with the third annual Scorpio Stingdig featuring Scarub and Eligh from Living Legends, plus DJ Drez, Sunspot Jonz, Ivan Ives, Franco and another Scorpio, Very G from Afro Classics. (Scorpios get in for half price.)

Still more hip hop Saturday at the Red Fox: Sleep and Josh Martinez, aka The Chicharones, spike their crunchy, greasy raps with humor. Locals HiWay and Franco join the fun.

The world fusion band Vidagua, with vocalists Lorenza Simmons (from AkaBella) and Bianca Mankai, plays a show Friday at the Jambalaya. "We're starting the night with Newborn Ancient Love Ensemble, a folky world-vibe kind of band with musicians from Asheville and some Humboldt people," said Lorenza. "Then we'll do an acoustic set with me and Bianca accompanied by Berel [Alexander] on guitar and Mike Lee on cello. Then the full Vidagua band will come on with more guests: my dad (Madi Simmons), Ishi [Dube] and Berel again. We're excited to get the sound out there."

Saturday at Six Rivers, Ashland's 100 Watt Mind, formerly known as Brynna Dean and the Sympathetic Strings (or BaDaSS), plays what they describe as "original rockin' dirty roadhouse stomp blues." But first they share the bill Thursday at Jambalaya with friends Orphan in the Afterlife from Whale Gulch, who, says Orphan Jesse, "developed out of The Lost Coast Marimbas as most of us are also with that band -- they like to call us the next generation. It is all original music written on the bass marimba with sax, accordion, drum set, hand drums and vocals, described as Tom Waits meets Talking Heads and Frank Zappa -- only with a female singer."

Scott from Portland's The Pink Snowflakes dropped a line saying, "We're headed down the West Coast on a mini-tour playing The Roxy in LA, The Knockout in SF, a mall in Sacramento, a couple other places and then [Saturday] The Alibi in Arcata [with Nipplepotamus]. We shall be toting our new 7" entitled You Don't Miss Your Planet, which is one original song, "She's The Planet," and then a cover of "You Don't Miss Your Water" from The Notorious Byrd Brothers."

Songwriter, vocalist, accordion, banjo, saxophone player Mark Growden brings his "soulful Americana noir" to Garberville Civic Club Thursday, playing tunes from his upcoming album Lose Me in the Sand. If you're in NoHum and happen to pick this paper up on Wednesday (Nov. 17) you might also catch him at Synapsis.

Do you have a ticket to see the Tommy Castro Band play at the Riverwood this weekend? If not, forget it. Loreen tells me they sold out weeks ago. Better luck next time. BTW, Sara Bareilles' holiday shows at HSU are sold out too. (I warned you.)