Confessions of a Champagne Snob 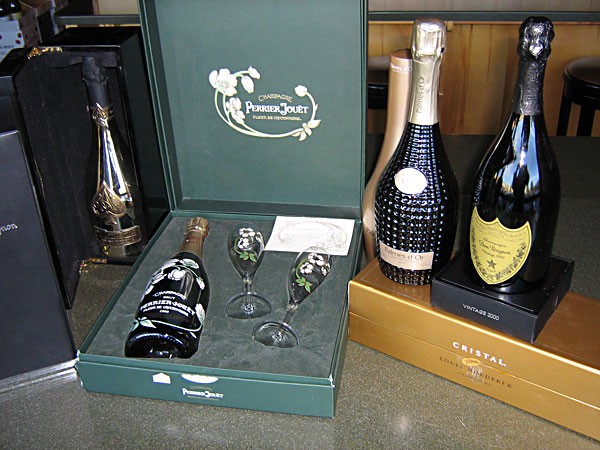 It happens every year about this time, in magazines and newspapers, online: an outpouring of effervescent enthusiasm for holiday sparkling wine bargains. "The best of West Coast bubbly has rarely been better," trumpets San Francisco Chronicle Magazine. The online wine merchant www.novusvinum.com features the "Top 20 American Sparkling Wines," from a modest $19 for Francis Coppola 2008 Sofia Blanc de Blancs to a staggering $100 for Schramsberg 2002 J. Schram. Words like "festive" and "elegant" promise a transcendental experience.

They lie. Well, they pretty much have to lie. No one would be long in business selling wine or print ads if they told the truth: American sparkling wine at its best is not in the same class as even the least expensive imports from Champagne. The fact is, it may never be.

The world of cuisine is fertile ground for happy, often accidental inventions: the 18th century discovery that oil and vinegar could, by careful blending with egg yolk, be emulsified into Sauce Mayonnaise. Peking Duck: an ancient dish, eaten by wealthy Chinese, consisting of just the crisp skin of a fattened duck, slowly roasted to a glossy brown in a long process taking a whole day. Distilled spirits, a byproduct of 8th century alchemy that produced what an Arabic poet described as, "a wine that has the color of rain-water but is as hot inside the ribs as a burning firebrand."

But the ultimate adventure may have been the one that produced gold from straw.

The French region of Champagne, a chalky terrain with cool summers, long produced the worst wine in Europe, thin, sour, and pinkish. Moreover, cold autumn temperatures prematurely halted fermentation in the cellars, leaving dormant yeast cells that would awaken in the warmth of spring and start fermenting again, often reducing casked wine to vinegar, or releasing carbon dioxide, which caused bottles to explode.

A long process from the 17th to the 19th century succeeded in trapping the carbon dioxide in stronger bottles, while other advances in technique removed impurities and added dosage (a brandy made from the same grape) to adjust the sugar. Et voila! Méthode Champenoise, naturally carbonated wine.

It would seem that the technology would be simple to replicate, and it is. But the taste and mouthfeel of true Champagne is even more elusive than the black truffle, and impossible to import. Domestic wines, no matter their pedigree, just don't have it.

I resisted this reality for most of my life. Convinced that good American "champagne" was just around the corner, really inevitable, I loyally tried bad wine after wine. And when the major Champagne houses invested in Napa vineyards like Domaine Chandon and Roederer Estate, I was enthusiastic -- until my second sip. The wines were nothing like the real thing. They were raw and uncultured.

It must be admitted that there is plenty of undistinguished Champagne -- it's all over Europe. But it doesn't get shipped here because of federal alcohol excise taxes, $3.40 per gallon, more than triple ordinary wine. It doesn't pay to ship cheaper wines. Thus the retail price for non-vintage Champagne begins around $32 a bottle.

A few years back, Safeway began bulk importing low-to-moderate priced Champagnes seasonally, for as low as $27 for Moet & Chandon Red Star (with a case discount). And we simply gave in. After all, we only drink it perhaps a dozen times a year. It made no sense to pay $20 for inferior wine, when a few dollars more bought a taste of paradise.

The other night, we shared a half bottle of Taittinger in honor of the first crab of the season. There was the first silvery sparkle on the tongue, of course, followed by the blend of tart and sweet fruit; then I noticed the bubbles. Lots of tiny bubbles are a hallmark of good Champagne (no, I don't know why), and these were pinpoints. The second swallow was as good as the first, as was the second glass, and I recalled my first great bottle of wine, a 21st birthday gift: Chateau Lafite Rothschild 1957, also a half bottle. That was when I realized for the first time that it was possible to drink wine without wincing -- there was no alcoholic burn whatever. It was as easy to drink as ice water, and as refreshing. What a concept! Wine to quaff, not merely sip. (I just looked up the 1957, and you can buy it for $1,498. Of course, for that you get a whole bottle.)

I may seem contrarian in my insistence that American wines are simply not in the same league as imported Champagne, but I'm hardly alone. I talked with Bob Stockwell at the Co-op and Ed Bernard at Libation, and they readily admit that domestic wines can't really compare.

Why is Champagne so much better? That semi-mystical concept, "terroir." The soil is not friendly to grapes, which means they demand special pruning. The weather is cool, more like Humboldt County than the Napa Valley. This reduces the amount of residual sugar, and allows the tartness of the Pinot grape to flourish in a way completely different from the same vines planted just to the south in Burgundy.

Fortunately, there are the Safeway bargains. At under $30, Moet & Chandon Imperial is the best buy, but Veuve Cliquot is just a bit more. They are both superb. But open the bottle gently (popping is tacky), and have a container with ice if you aren't going to drink it right away. The very best "nose" is concentrated by a "flute," but any wineglass will do. You could just use water glasses, but hey -- it's a special experience -- make it as fancy as you got. Oh, and chill those glasses in the freezer, because room-temperature warms the wine.

For those interested in truly spectacular Champagnes, Libation has some ranging from $60 to over $300, including the legendary Roederer Cristal, which I've tasted once (it was memorable, as at $15 a swallow, it should be). They have the largest selection of Champagnes I've seen locally. Libation will have a special tasting from 6-9 p.m. on New Year's Eve, with flights of California and French sparkling wines and a distinguished red.

At the other end of the scale, the Co-op has chosen a number of interesting American wines, notably a Roederer Anderson Valley Brut Rose for $27 -- Bob thinks it's a great buy. And remember what I said about Champagne having weather like ours? Briceland Vineyards has a brut made from local grapes! $30, so it damn well better be good. But then, wouldn't anything taste better if you knew it was part of the soil you live on? I would love for it to be better than the Moet Imperial.

But I don't think it will be.