Confessions of a Renegade Recycler 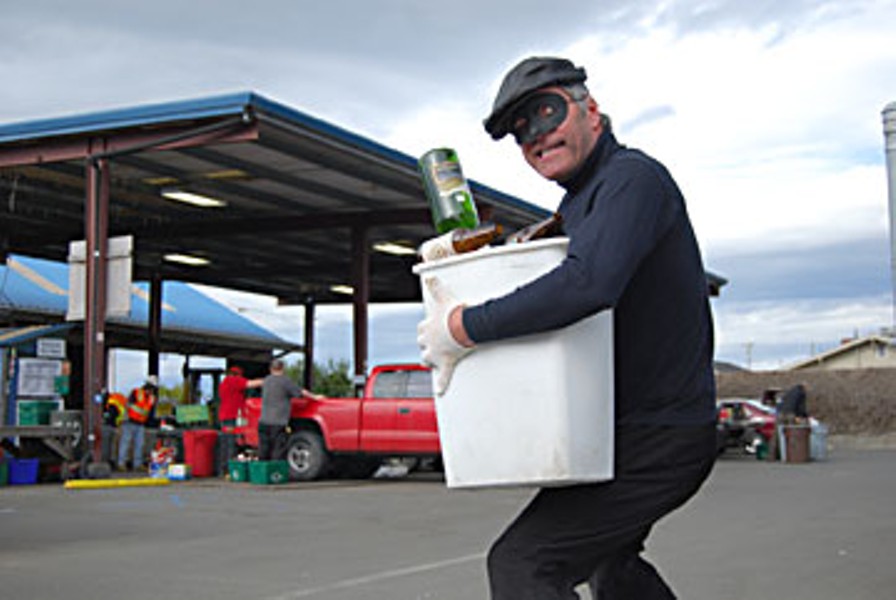 Due mainly to the diligence of my wife, we recycle virtually every molecule of paper, glass, plastic and metal that passes through our house. Whereas I might be tempted to just toss into the trash that scrap of aluminum foil encrusted with tuna fish salad, my wife will duly wash it and consign it to a recyclable bin. All of our garbage goes into our compost pile, which, since we don't do that much gardening, is starting to resemble the Pyramid of Cheops. About once a month I make a trip to the sanitation station in McKinleyville where I pay about $10 to dispose of the few things we can't recycle, such as waxy milk cartons, corn cobs and chicken bones.

I was just starting to think of myself as a pretty responsible Earth-friendly eco-green sort of guy when Arcata Community Recycling Executive Director Mark Loughmiller abruptly burst my little bubble with the ugly truth: I'm a leech. I recently read some comments by Loughmiller in the Arcata Eye, in the Feb. 11 issue. It seems his opinion is that people who recycle at ACRC but who are not paying Arcata Garbage for pickup services have "taken advantage of a recycling system". He supports the soon-to-be-approved mandatory subscription of all Arcata residences and businesses to Arcata Garbage's garbage and recycling pickup services. "The free ride is ending," he firmly announced at a special City Council meeting to the reprobates who voiced objections to this plan.

I was ashamed. According to Loughmiller, my fellow citizens who pay Arcata Garbage are picking up the lion's share of the tab for my wanton and prodigal drop-offs at ACRC, whose services are contracted by the City of Arcata to the tune of $400,000 annually.

I was confused. In the past I have been hired by ACRC to produce TV ads inspiring people to recycle there. I wasn't told to include the message that by doing so they would be considered deadbeats.

I was curious. I needed more information. Maybe their attitude had changed since they introduced their new dual stream fuel-injected turbocharged Samoa facility. So I visited the ACRC Web site at www.arcatarecycling.org There I found that they still seem to be encouraging people to recycle. "Welcome!" is the first word on their Web site. "We offer a variety of recycling services including drop-off recycling!" proclaims their mission statement. They've published a handy, slick, downloadable brochure for schoolchildren touting the benefits of recycling. They offer free tours of the facility. They do everything but holler "Come on down!"

One thing intrigued me, and that is: As Arcatans, citizens of possibly the most democratically-minded city in the world, how can we legally be forced to subscribe to services from one company? Isn't that sort of like a monopoly? And kinda like taxation without representation? What would Thoreau think? Would he encourage civil disobedience, like not paying the new fees? What if we didn't? What's the city gonna do? Not pick up our garbage and recyclables?

I figured that Arcata Garbage must be either a non-profit or a government agency. I would feel better about being required to subscribe to them were this the case, similar to the way I don't have any problem with paying storm and sewer fees. If they're not a non-profit then I hope they sell stock in their company, because I suspect it's going to rise. I would definitely buy some with all the money I make from recycling beer bottles.

I decided to do some Googling to check out their status. The first thing I noticed about the top Web site I was directed to, www.arcatagarbage.com, is that it's blatantly sponsored by something called Adult Friend Finder, the World's Largest Sex and Swinger Personals Community. Real Sex Just a Click Away! This would be pretty weird for schoolchildren doing research about recycling to stumble upon. Maybe it was harmless...

I clicked on it. Up came dozens of pictures of scantily-clad nubile young women offering their services, which did not seem to have anything to do with garbage pickup. "Get laid tonight in Pleasanton!" is an example of what they were offering.

I could not dally here. I had research to do. I clicked the Arcata Garbage "Home" link and lo, up came someone called Lady Sonia, who was obviously proud of her body and was not ashamed to explicitly show it in its natural state. She even wrote a little essay about it: "Today while at school I could not help but lift my dress and touch my wet (synonym for "cat"). The new office assistant is a young man from the university. These young assistants have the biggest (nickname for "Richard") and they sure know how to use it."

Although the site seemed aptly named, I couldn't find anything on it relating to Arcata Garbage. I mentioned this oddity to my son, who is 24. "It sounds like it's been hijacked, Dad," was his opinion. I had never heard of this, but then, when it comes to computer and Internet skills, he's at the level of quantum physics while I'm at Dick and Jane, book two, introducing Spot and Puff.

I did some more research. Apparently hijacking Web sites is getting to be pretty common, a sort of identify theft. I went to Arcata Garbage and told them their Web site had been hijacked. They said they didn't have a Web site so it couldn't have been hijacked.

Now I'm even more confused, but at least I can state for the record that Arcata Garbage is the victim here, has nothing to do with peddling sex, and if you sign up for membership with Lady Sonia, Britain's Premier Fetishist, it's not going to show up on your Arcata Garbage bill.

Returning to the topic of recycling, I think there's a story here that would make a great movie. The heroes would be a remarkable little self-sustaining couple in their golden years who are living a simple life off the grid within Arcata city limits. Solar power, vegetable garden, chickens, water from a well, no phone, no Internet, no cable. No need for garbage and recyclable services. Nothing leftover in their budget to pay for them at any rate. In comes the city and slaps a new fee on them for a service they don't need. They refuse to pay it. The city retaliates by seizing their property and turning it into the new site for Arcata Endeavor.

Or maybe it ends some other way. Maybe the city rescinds, deciding it's okay to use the taxpayers' own money to pay for recycling. I don't know. But it'll be interesting to watch. Almost as good as the Arcata Garbage Web site.