By Mark Dowie - The MIT Press 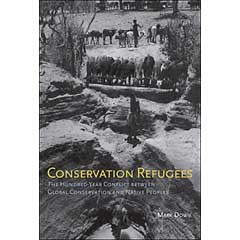 The current discussions between North Coast tribes and California state government about applying the Marine Life Protection Act, and the concerns stemming from the state ending a Sonoma County tribe's access to a new marine reserve, are not isolated incidents.

According to author Mark Dowie, conflicts between environmental protections and indigenous peoples are worldwide.

Citing extreme situations in Africa and Asia as well as South and North America, Dowie writes that large environmental organizations in league with international development powerhouses and governments often attempted to save wilderness areas by moving indigenous peoples out. The repeated result has been to impoverish and destroy these peoples (with countless individual tragedies) while also failing to preserve a healthy ecology.

Dowie doesn't dismiss the problems. He acknowledges harmful practices of some indigenous groups but argues that it is better to negotiate changes in these practices than to arrogantly dispossess entire peoples, creating these "conservation refugees." It is that arrogance -- including that of a largely white environmentalist establishment -- that contributes to the misunderstanding and suspicion that has divided two groups that should be natural allies: Native peoples and environmentalists.

Dowie argues as well that the idea of wilderness as meaning human-free is another cause of these conservation tragedies. "One can only wonder what Yosemite would look like today were the descendants of Tenaya still thriving in the valley, sharing the native wisdom accumulated over 4,000 years in the ecosystem, and sharing, as equal partners in the stewardship and management of the park," he writes. "What would be the state of its biotic wealth? Would the grizzly bear and bighorn sheep still roam its meadows and canyons?"

The Yosemite situation is complicated, but the example is suggestive. Not only are there places in the world where such coexistence is possible, but many other environmentally threatened areas could benefit from the wisdom and commitment of traditional inhabitants.

Dowie backs up such generalizations with reporting in that difficult midrange between the specifically descriptive and the generally conclusive. Readers have to be willing to navigate the acronyms and statistics, but the cumulative effect is a compelling history of global failures and some successes in saving the last natural ecosystems, and saving the last indigenous peoples. The stories are as complex as reality, and as human.

Economic development, national and international politics all come into play. But for all the tragedy there is also growing awareness, and sophistication in finding common ground and developing partnerships. There is also the assertion of principle, such as the UN Declaration on the Rights of Indigenous Peoples, the text of which is included in this book.