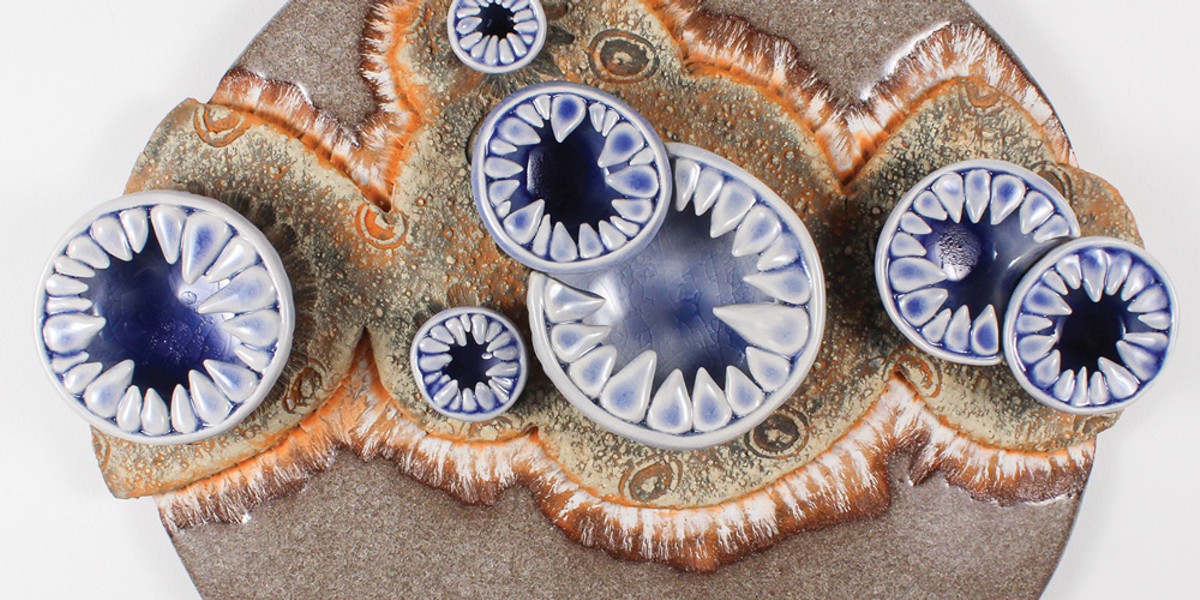 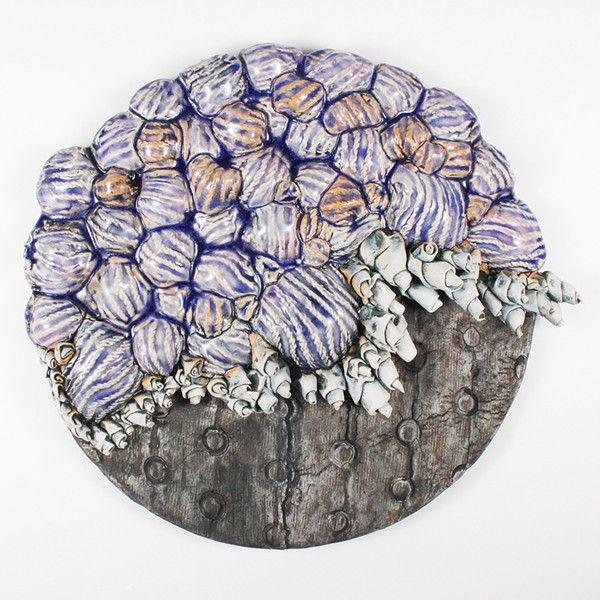 Courtesy of the artist "Disk with Blowing Foothills" by Shannon Sullivan. 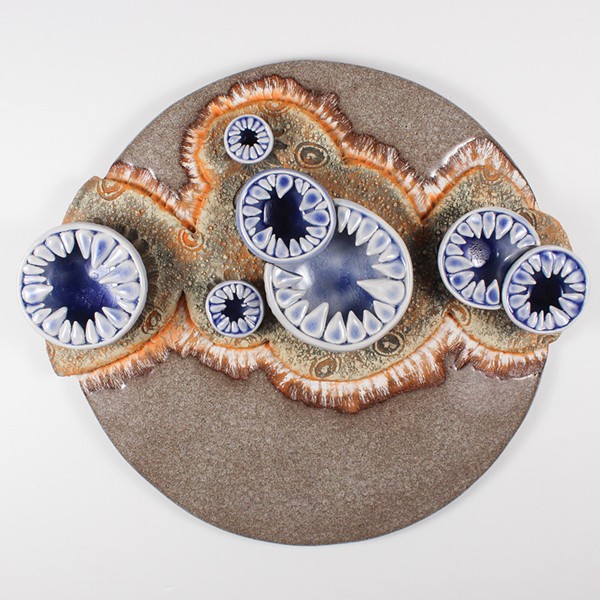 Courtesy of the artist "Disk with Citrus Orifice" by Shannon Sullivan 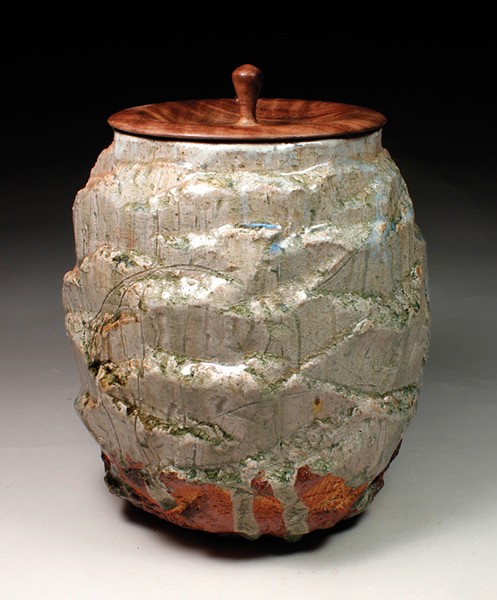 Courtesy of the artist "Lidded Vessel" by David Zdrazil. 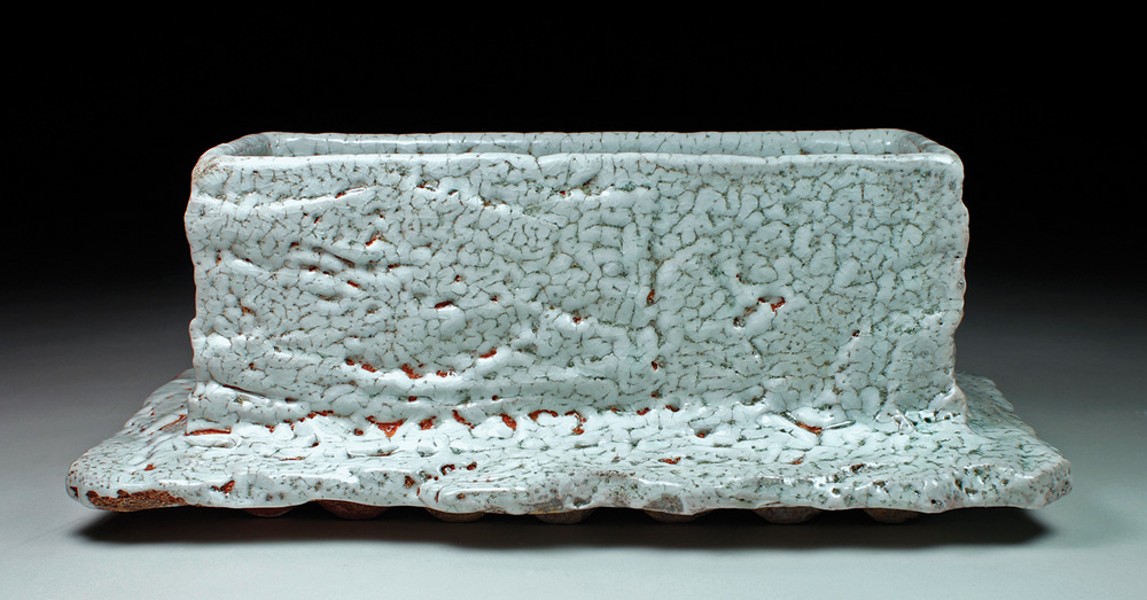 David Zdrazil's gnarled, earth-toned vessels stay close to the ground, while Shannon Sullivan's sleek ceramic discs cluster like tethered balloons on the gallery walls, pushing back against their own intrinsic weightiness. The Eureka-based ceramics artists, who show new work this month at Humboldt State University's Third Street Gallery, exhibit, live and work together — they run the ceramics program at College of the Redwoods — but their signature forms and processes remain distinct.

Fifteen of Sullivan's discs are clustered in "bubble arrays" on the gallery walls. They teem with colonies of colorful forms shaped like pyramids, crystals, lozenges and bubbles. None of these structures appear static; on the contrary, they are depicted midway through a process of becoming, with no apparent end or beginning in sight. They cleave, clone, bud, multiply and divide.

These portals open onto other worlds. The tondo format shapes our access to structures that could in theory be galaxy-sized — or too tiny to see with the naked eye. The creamy discs give no indication of scale, and the geometric forms that teem within them recall phenomena occurring at the inner and outer limits of microscopes and telescopes.

Some forms originated in Sullivan's childhood memories of using a microscope to view specimen slides in her mother's medical lab, an experience she identifies as formative. At the macro scale, sources of imagery include topographic maps of Central Valley waterways and the Sierra Nevada foothills. Sullivan studies accessible natural forms like saline crystals and soap bubbles to gain insight into serial development processes like clustering, division and replication.

Convergence generates nests of complex modular forms with anywhere from 13 to 16 faceted sides — hybridized patterns from the natural world. "I like to pare down forms into a kit of parts, using organic forms that are also modular units capable of building infinitely in space," the artist says.

Sullivan comes across as a technologist, reveling in normally unseen phenomena that are rendered visible through technological extensions or supplements. Zdrazil's work confronts modernity in a different way, positioning itself as foil.

Zdrazil makes covered vessels with wooden lids inspired by traditional Japanese ceramics, as well as angular basins that evoke multiple ancient associations: barges, troughs, baptismal fonts, primitive sarcophagi. These clay forms remain in close contact with the ground, as if they heeded the admonition God lays upon Adam in Genesis: Thou art dust and to dust thou shalt return.

"Art is almost in a place where it's like, 'You can't make art unless you know these programs, have these apps installed,'" Zdrazil says. "But my techniques get more and more primitive, as everything else gets more high tech."

To counter prevailing tendencies, he and Sullivan preserve their shared studio as a sanctuary from the digital world. Usage of laptops and other electronic devices is kept to a minimum. There is electricity but running water is furnished by a rain barrel collection system.

Zdrazil likes to harvest the sticky clay abundant in Humboldt soils, which comes out of the ground bluish gray but fires to a rusty red. Local wood fuels the kiln that he and Sullivan designed and built in their Myrtletown backyard. The artist shapes and fires his vessels using traditional techniques that are thousands of years old. His pots, mugs and troughs lend tangible form to the notion that beauty proceeds from the pursuit of perfected function.

As fire consumes the wood inside Zdrazil's kiln, ash drifts about inside in unpredictable patterns, tattooing the firing vessels where it lands. The stripes, speckles and splashes that complicate the vessels' textured surfaces are the natural outcome of this metamorphic process. No two vessels are exactly alike. Each pattern is the outcome of a unique event and cannot be repeated.

In their simplicity, these ceramic forms are full of surprises. Unexpected juxtapositions and sensory details abound. Care has been lavished not only on the way these vessels look but also on the way they handle and sound. A mug so rough that brushing your knuckles carelessly against it might make them bleed has a lip that's napped with a silky glaze the color of dark chocolate. It would feel cool and frictionless on the lips, like butter.

The artists position their emphasis on sustainability as part of an integrated social practice. For them, art is meant to be integrated into life. Zdrazil and Sullivan welcomed a baby daughter into the world last month. At their home studio, artichokes and succulents line the path that leads to the hulking kiln; leeks grow in neat rows in the garden and, like everything else that's growing around them, pots and other ceramic pieces in various stages sit outside, baking in the sun.

The show continues through May 14. A reception for the artists will be held at HSU's Third Street Gallery on Saturday, April 1 from 6 to 9 p.m. during Arts Alive.