Contents Under Pressure: Graffiti at Piante 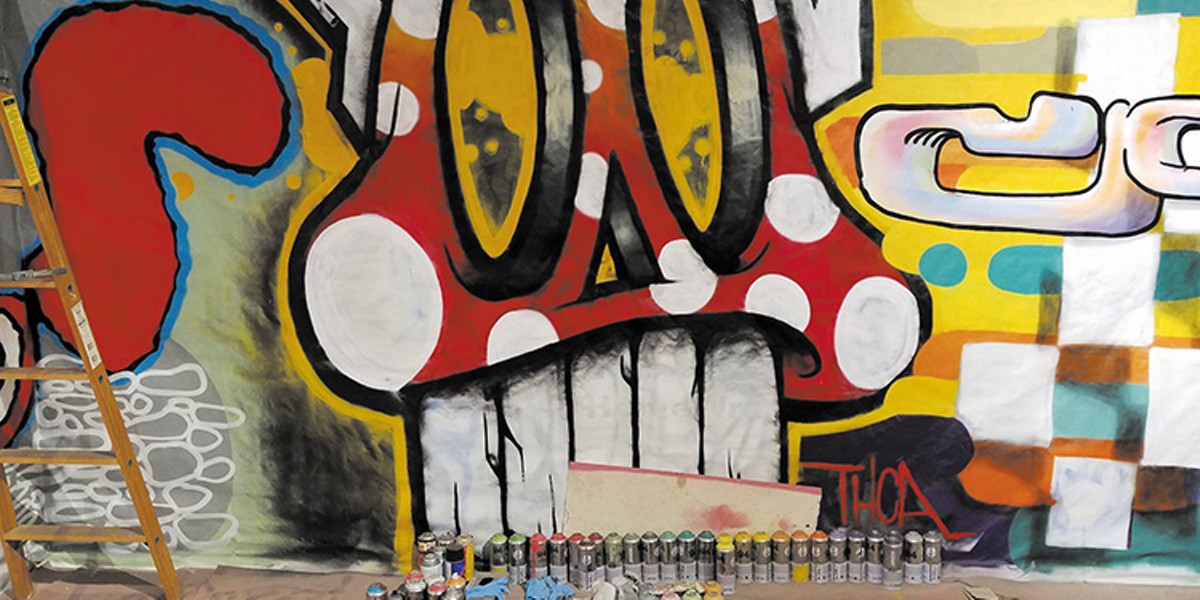 Photo by Gabrielle Gopinath A shroomy work in progress by THCA.

Everyone who knows about it is very excited to see what craziness I have agreed to this time," gallerist Sue Natzler said with a laugh about the graffiti art exhibition opening this month at Piante Gallery. The installation was in the final stages of completion when I saw it and indeed, the place looked changed.

Guest curator Matthew Ananda Oliveri, who organized the show, sheathed the gallery walls in Tyvek and invited some 20 graffiti artists to do what they liked with the space. As is common practice among graffiti writers and street artists, these artists chose not to be identified other than by their writers' tags.

The gallery walls that normally frame artworks for display became the art, as TOYO, WONG and others spray-painted them into a blazingly colored palimpsest of artists' marks over a period of weeks. The results are high-energy and intensely colorful: Imagery comes blasting at you from all directions. We're used to viewing artworks that are neatly framed, often by a screen's parameters, but here the art frames us.

Viewed here at close range in 360-degree surround, graffiti takes on a heightened intensity. That's good because it goes some distance to make up for the inevitable deflation of presence that follows when you bring a medium made for the streets indoors. Touring the space is like overhearing an animated conversation taking place among 20-odd people who would self-identify as homies, with the volume turned up to nine. When I visited, industrial fans were moving air through the space at a brisk clip but the smell of spray paint lingered.

Piante has not shown graffiti artists' work before; the exhibition represents an expansion that has been eye-opening for some. "Some friends asked, 'Are you sure this is Piante?'" Natzler allowed, gesturing at the wildly-colored walls surrounding her. At first glance, graffiti might seem a medium apart from the more refined and/or conceptually oriented artworks Piante often shows. But Natzler, a longtime street art fan, said she had been motivated to show works by local graffiti artists ever since the site known as the Devil's Playground was destroyed by the city of Eureka in 2016.

"This exhibition was intended as a response to the Devil's Playground — a response to the depth of talent in the murals there and also a response to the misguided destruction of the space," she explained. "We say we want to be a city of the arts here in Eureka ... but then we bulldoze the art." Natzler cited Miami's Wynwood Walls open-air graffiti site, a tourist destination in its own right, as an example of the positive synergy that might result from a more productive, results-oriented civic approach to engaging with community artists.

The exhibition title cites a Bible verse from the Book of Proverbs that has often been weaponized against "creatives" and malingerers: "Idle hands are the devil's workshop." Eurekan graffiti artists put a spin on that truism, starting in the 1980s or '90s when the first lawbreaker with a can of Krylon and a dream of seeing his or her name writ large climbed inside the cavernous ruins of the Pacific Lumber Company mill to tag the space. The illegal graffiti zone gained fame — first the graffiti writers and then everyone else started calling it the Devil's Playground. It seems right that this grass-roots art revival would have blossomed in the literal ruins of the timber industry that no doubt employed some of these artists' parents and grandparents.

The shift from "workshop" to "playground" was surely significant; the devil, no longer the grim taskmaster of the King James translation, has been reimagined for this post-industrial, post-theological American century as (what else?) an evil clown, part John Wayne Gacy, part Juggalo, part Pennywise. He appears here several times beneath the scrawled inscription "idle hands are the devil's playground." Many of the artists showing here are Devil's Playground veterans.

Just about every form of graffiti art that has appeared since the medium's inception is represented, including the tag, the throw-up, the portrait, the sticker and the stencil. Imagery ranges. Demons, ghouls and skeletons mug and writhe. A topless woman meditates in sukhasana. Cranes wing their way across a sunset sky. A specimen of the colorful psychedelic mushroom Amanita muscaria, as prominently represented in local forests as it is in Super Mario Brothers, flashes a toothy grin (the punny inscription above it says "Fun-Guy").

Some exhibition participants layer imagery to create complex, multi-layered surfaces that go well beyond the speedy execution associated with many street art forms. Others wield spray cans in the traditional manner to create tags as gnomically complex as those executed in New York in the 1970s and early '80s, during the period historians characterize as the art's first golden age.

Yet despite the chops many participants display, this is not your pop's graffiti. Graffiti art has been around long enough to reflect on its own history and status. These artists are working not only with ideas drawn from graffiti's past but from the whole history of art as well. Next to the diversity of themes and approaches on display the virtuosic productions of the original wildstyle era, elaborate statements of the name, look like icy formalism by comparison.

"Idle Hands" will be on display at Piante Gallery at 620 Second St. in Old Town Eureka through the month of February. For more information call (707) 441-1322 or see www.piantegallery.com.

Gabrielle Gopinath writes about graffiti and other forms of modern and contemporary art. Her article: "Ornament as armament: playing defense in wildstyle graffiti" appeared in Understanding Graffiti: Multidisciplinary Studies from Prehistory to the Present, edited by Elizabeth Olton and Troy Lovata.