The joys of Jingle Jangle 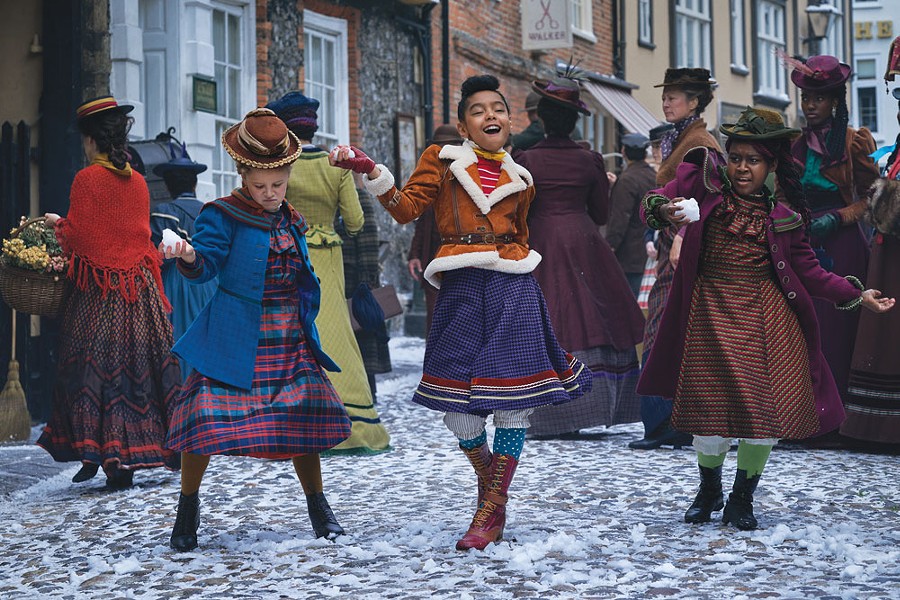 Jingle Jangle Every time a post-election lawsuit gets tossed. (Tag yourself — I'm the girl on the left going HAM.)

JINGLE JANGLE: A CHRISTMAS JOURNEY. Somewhere on the deep end of my October horror movie binge, I noticed the nightly episodes of Murder She Wrote I needed to come down from an exorcism or a house full of haunted dolls were no longer available. Instead, with pumpkins still yet to carve, the Hallmark Channel had shifted gears into a Groundhog Day loop of Christmas movies. They are at once uniform in their aesthetics — white couples in catalogue-fresh sweaters picking out trees, decorating community halls and gazing longingly under twinkling lights — and infinite in their contrivances. I frequently stop flipping channels to catch snippets of dialogue like, "How are you enjoying being home for the holidays? Aside from the transplant, I mean." Not making that up.

I begrudge nobody the happy endings guaranteed by holiday movies — just try wresting my worn copy of While You Were Sleeping from my eggnog-sticky fingers. (What? It's after Daylight Savings. Mind your business.) But, organ transplant plotting aside, we could use a little variety, a broadening of the genre. Like the little girl in the opening of Jingle Jangle whose face falls at the prospect of hearing her grandmother read "'Twas the Night Before Christmas" again, it's time for something new. How about an African American Victorian steampunk R&B magical math musical?

The aforementioned grandmother (Phylicia Rashad) opens up a clockwork pop-up book to tell her grandkids the tale of Jeronicus Jangle (Justin Cornwell), a gifted inventor of mechanical toys and novelties whose shop is abuzz with customers and gadgets. His success is snuffed out by his own invention, however, when Don Juan Diego, the comically egomaniacal wind-up matador (Ricky Martin) he brings to life with a secret formula, cajoles Jeronicus' fumbling apprentice Gustafson (Miles Barrow) into making off with his designs. Decades later, while Gustafson (Keegan-Michael Key in Great and Powerful Oz swag) has used the pilfered plans to become a toy-making mogul. Meanwhile, Jeronicus (a grayed Forest Whitaker), a widower estranged from his daughter Jessica (Anika Noni Rose) and his granddaughter Journey (Madalen Mills), has withdrawn into the former Jangles and Things, now a dusty pawn shop on the verge of foreclosure unless he can invent something revolutionary to inspire the bank's confidence. A visit from Journey, a budding inventress who sees equations glowing in the air before her like her grandfather, gradually brings the old man back to himself and his drawing board, though not without catching the attention of the envious Gustafson and his tin Iago.

The look of writer-director David E. Talbert's Jingle Jangle is refreshing, with its brightened Victorian costuming in a riot of jewel tones and bold patterns amid a town that recalls Harry Potter's Hogsmeade with none of its grimness. Interspersed throughout are charming stop-motion-style sequences and there's playfulness and joy everywhere, from Journey's gear-festooned Afro-puff faux-hawk to the exuberant song and dance numbers like the opening "This Day." The big, athletic choreography by Ashley Wallen (The Greatest Showman, 2017) carries The Wiz vibes with ensemble numbers drawing on jazz, swing and African dance traditions.

John Legend's R&B and soul-inflected songs are carried by a powerful array of pipes, not the least of which belong to Lisa Divina Phillip, whose aggressively flirtatious Ms. Johnston woos a jittery Jeronicus with the funny and sweet "Smile." As she sings "Square Root of Possible," it's easy to imagine the plucky Mills filling a live theater to bursting with her voice, too. As the villain, Key is a salty holiday ham, clapping and stomping through the revival-style "Magic Man G," in which he feigns exhaustion as an assistant drapes him with a monogrammed cape like James Brown. Whitaker may not shake the rafters but as a distracted grouch, his face and soft singing, suddenly invested with regret, sell it.

There are places where the pacing lags and the logic of Jeronicus and Journey's magical math is a little hazy — though to be honest, the glowing calculations in the air are how I think of people who can calculate a tip in their heads anyway. The clockwork Wall-E robot and its powers didn't quite win me over and the end veers hokey, but in a family Christmas movie, a little corniness can be forgiven. And in the service of joy, especially the Black joy we so seldom see in the genre, it's worth the indulgence. And the perennial themes of the power of belief — not in Santa or a vague spirit of Christmas so much as in oneself and the ones we love — and getting back up from loss, fixing broken things and relationships, feel like the sort of timely optimism we could use right now. PG. 122M. NETFLIX.