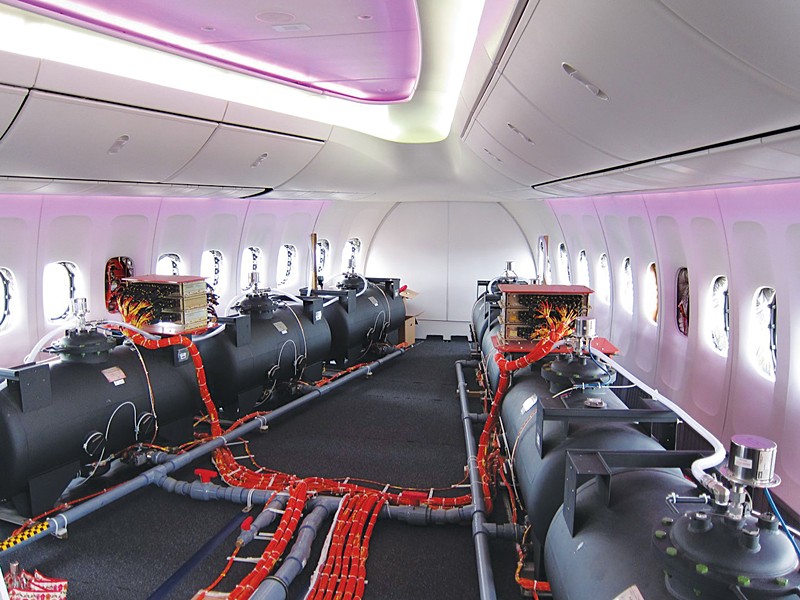 Photo by Olivier Cleynen, Creative Commons Not deadly chemicals about to be sprayed on the populace far below, but barrels of water used as ballast in test flights of a prototype 747.

Contrails — condensation trails — those long, thin white streaks of water droplets or ice crystals that form behind jet airplanes, are very cool. Literally. The hot exhaust from a jet engine is mostly carbon dioxide and water vapor, both gases. As the water vapor is exposed to cold temperatures — typically minus 40 degrees at jet plane altitudes of four or five miles — it condenses into tiny droplets of liquid or solid ice crystals. This phase transition takes a moment to occur, which is why contrails start a little behind the aircraft engines.

If you've lived in a cold climate, you've surely created your personal contrail on a winter morning; it's the cloud of condensing water droplets as you exhale into cold, humid air. The colder and more humid the weather, the more pronounced the effect. Most aircraft contrails only last for a few minutes before they dissipate in the upper atmosphere winds, but they can last for hours if it's sufficiently calm, humid and cold up there. Our atmosphere is far from uniform — which is why we have clouds — so you can sometimes see a contrail start and stop as it encounters more or less humid and/or hotter or colder patches of air.

Pretty, perhaps, but the exhaust from 50,000 passenger flights every day is adding to global warming. Until 2001, meteorologists weren't sure if the net effect of contrails was to cool the Earth (by reflecting incoming, short-wavelength sunlight) or to warm us by "greenhouse" trapping of reflected long-wavelength rays ("Global Warming," March 24, 2011). The three-day grounding of commercial air traffic following 9/11 gave researchers an opportunity to test their models. Turns out more heat is trapped than reflected. More contrails, more warming.

Chemtrails on the other hand — short for chemical trails — are not cool, in any sense. That is, if they actually existed. Listen to Art Bell or Google "chemtrail," and you'll be led into a nutty world of conspiracies, government plots and New World Order paranoia. Did you know that, for the last 30 years, the government/United Nations/Opus Dei/cabal of rich industrialists/aliens have been slowly poisoning us/turning us into zombies/experimenting with climate control? Someone is doing something bad and secret, which I guess the country's 40,000 commercial pilots and air traffic controllers are all in on.

Need I go on about how ineffectual spraying would be from 40,000 feet? How long-lasting contrails (the main giveaway, apparently, of chemtrails) have been around since World War II? How photographs showing barrels inside a prototype 747 are filled with water, not deadly chemicals (allowing test flight pilots to change the plane's center of gravity by pumping from one barrel to another)?

If you are still worried about all this (apparently one in 40 of us believe in the chemtrail conspiracy), take heart. The sylphs are on our side. Sylphs are "air elementals" who are in the business of "transmuting, neutralizing, and destroying the noxious substances being sprayed as chemtrails," according to one late-night-after-too-many-beers website that I stumbled upon.

We have plenty to worry about — I just wrote a pair of columns about ocean acidification and global warming (and yes, contrails don't help) — but at this point, I trust that our leaders aren't poisoning us from above. How can I be so sure? The government keeping a secret? Next you'll be telling me about military intelligence.

Barry Evans (barryevans9@yahoo.com) asks you, for bonus points, why he didn't specify minus 40 Fahrenheit or Celsius?