Cool Temps and Great Fishing Along the North Coast 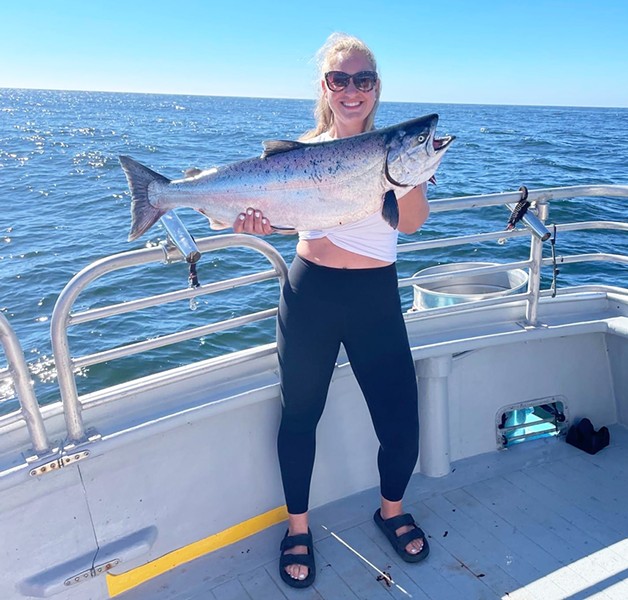 Photo courtesy of Lowell Wallace/Humboldt Charter Company Redding resident Brittney had herself quite a day Sunday landing this nice king salmon while fishing out of Eureka.

You couldn't ask for a better week of weather and fishing leading up to and through the holiday weekend along the North Coast. First off, the weather. While the rest of the state was sweltering and dealing with excessive heat warnings, our weather remained as coastal cool as always. And that was reflected in the number of out-of-town visitors who flocked to the coast to bask in the fog. Secondly, we had some fantastic fishing, both offshore and inland. The ocean salmon season kicked into high gear last Wednesday and ended Monday on a high note. Plenty of limits were reported by anglers fishing out of both Eureka and Trinidad ports, and the fish were a good grade. The tuna water also remained within reach and boats making the 50-mile run from Eureka did well Friday and Saturday. Not to be outdone, the lower Klamath provided some of the best salmon fishing we've seen in a long time. It was so good in fact, the catch rate on Friday alone saw 13 percent of the entire lower river adult quota harvested. Cool weather and great fishing, it just doesn't get much better.

Gale force gusts are expected for the northern outer waters late night Wednesday through early Friday. There is a potential for localized areas of strong gale force gusts Thursday afternoon and evening in the northern outer waters as well. Steep seas are expected through the end of the work week. As of Wednesday, the forecast out 10 nautical miles for Friday is calling for winds out of the northwest 5 to 10 knots with north swells 6 feet at 10 seconds and northwest five feet at 15 seconds. Winds will be out of the south 5 to 10 knots on Saturday with northwest swells 7 feet at 10. Sunday the winds will be from the south up to 5 knots and northwest swells 4 feet at 10 seconds. These conditions can and will change by the weekend. For an up-to-date weather forecast, visit www.weather.gov/eureka/ or www.windy.com. You can also call the National Weather Service at 443-7062 or the office on Woodley Island at 443-6484.

In a press release issued Saturday, CDFW projected anglers will have met the Lower Klamath River adult fall Chinook salmon quota below the State Route 96 Bridge near Weitchpec for the 2022 season as of 11:59 p.m. Sept. 5.

The fishery at the mouth of the Klamath closed the same day, Monday, Sept. 5, and will remain closed to all fishing for the rest of the calendar year. The rest of the lower main stem of the Klamath River below the Highway 96 Bridge at Weitchpec will remain open to the harvest of jack (two-year old) Chinook salmon (less than or equal to 23 inches). All adult Chinook salmon caught must be immediately released and reported on an angler's report card.

Anglers may still fish for adult Chinook salmon in other reaches of the Klamath Basin, including the main stem of the Klamath River above Weitchpec and the entire Trinity River until the closure of those fisheries. Anglers may keep track of the Klamath and Trinity river quotas by calling (800) 564-6479. For more information visit, wildlife.ca.gov/News/cdfw-announces-angling-closure-for-lower-klamath-river.

Flows releases from the Trinity will be reduced from 950 cubic feet per second down to 450 cfs on Friday, Sept. 9. Beginning on Sept, 12, flows will again ramp up, reaching 1,000 cfs by Sept. 15. These releases are meant to keep flows at 2,800 cfs at the Klamath Glen gauge. Flows will remain at this level until approximately September 21st.

According to Tim Klassen of Reel Steel Sport Fishing, the salmon season ended on a high note. "For this time of the year, the fishing was really good," said Klassen. "Scores were about a fish a rod or better since the bite turned on last week. The tuna water is still sitting northwest of Eureka about 40 miles. Some boats fishing Saturday did really well. The water that was coming up from the south got pushed back down with the north winds. The weather doesn't look too good the next few days, but we may get another shot on Sunday."

The salmon bite was pretty slow over the weekend reports Jake Mitchell of Sea Hawk Sport Fishing. "It was less than a fish per boat average," said Mitchell. "The rockfish bite is still excellent; we're spending most of our time at the Old Man. Lingcod are still hit or miss. We may have another shot at tuna Sunday if the weather holds."

The weekend saw some really good tuna fishing reports Britt Carson of Crescent City's Englund Marine. He said, "Boats traveled 30 to 35 miles southwest and did really well. Sounded like they caught all they wanted. The warm water is staying put for now, looks like the next opportunity could be Sunday. The rockfish bite has been great, with easy limits coming from the reefs and the Sisters."

"Tuna were within 12 miles of Brookings over the weekend, giving anglers their closest shot of the season before windy weather returned Monday," said Andy Martin of Brookings Fishing Charters. "Strong winds will keep most boaters at port through Friday, except for rockfish action just outside of the jetties. A few halibut were also caught last week before the wind arrived. Surfperch are being caught from both jetties. Crabbing remains slow."

The salmon bite was red-hot over the weekend even with the increase in flows. The river is full of jacks and quite a few adult kings are mixed in. Fish are being caught side-drifting the riffles and dragging bait through the deeper holes. The adult quota was met Sept. 5. The daily bag limit is two Chinook less than or equal to 23 inches. For more information, visit wildlife.ca.gov/News/cdfw-announces-angling-closure-for-lower-klamath-river.

A handful of king salmon were caught in the Chetco estuary over the weekend, including a 25-pounder on Saturday according to Martin. "A mix of jacks and adults have been caught. Bottom fish anglers also released several kings over the weekend just past the jetties. Salmon fishing has been good on the Rogue Bay, although many of the kings are starting to move upriver. Jacks are now being caught in the Grants Pass area."