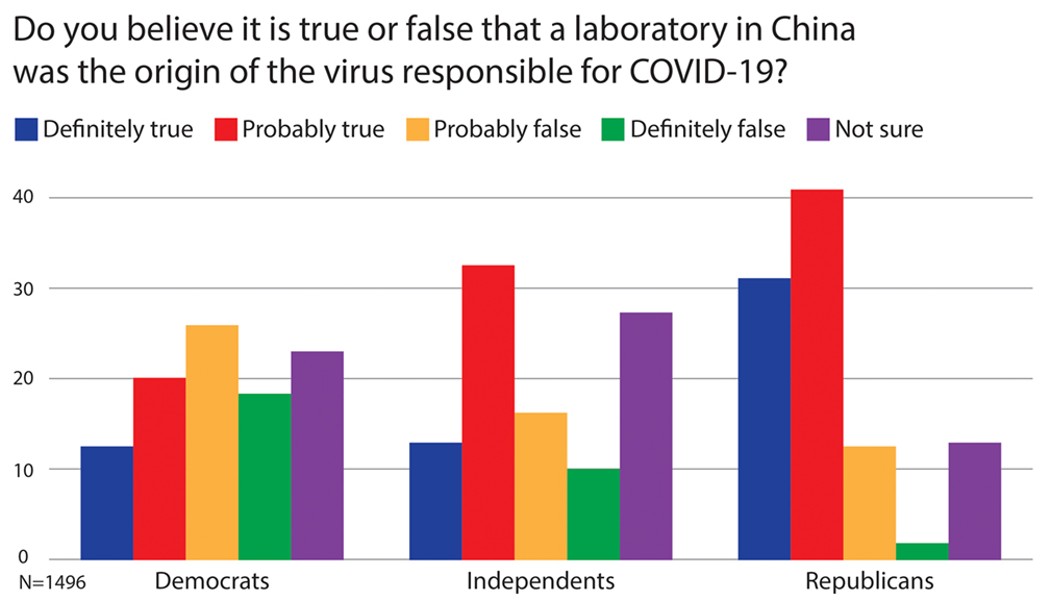 Economist/YouGov chart. Reprinted with permission. Graph showing how Democrats, Independents and Republicans responded to the question, "Do you believe it its true or false that a laboratory in China was the origin of the virus responsible for COVID-19?" Polling took place May 3-5, 2020.

Despite researchers showing that SARS-CoV-2, the virus causing the current pandemic, was not created in a lab in Wuhan, China, polls show that nearly half of all Americans prefer the rumors to science. Predictably, much depends on one's political persuasion: Twice as many Republicans believe this is either definitely or probably true. So, once again (having addressed this in a previous column, "Blame Evolution," March 26), it's possible to state with near-certainty that at least two features of the virus rule out an artificial origin:

The overall molecular structure or "backbone" of the virus differs substantially from known coronaviruses, instead resembling those found in bats and pangolins. A bioengineer creating a new pathogenic coronavirus would surely have started out with the backbone of a virus already known to be harmful to humans rather than reinventing the wheel, as it were.

The spike protein is so effective at binding to human ACE-2 cells that researchers concluded that it could only have evolved naturally, not created by genetic engineering.

According to Scripps Research immunologist Kristian Andersen, "By comparing the available genome sequence data for known coronavirus strains, we can firmly determine that SARS-CoV-2 originated through natural processes."

Although SARS-CoV-2 wasn't engineered, suspicion that it might have been isn't that far out of line, given our species' history with bioweapons. Such weapons come in two forms: natural and artificial. European ancestors, who knew all about fighting "dirty wars" with naturally occurring pathogens, spread the smallpox virus to Native communities in blankets, contaminated the enemy's water supply with rabid dogs and catapulted anthrax-infected sheep over castle walls.

Anthrax is a particularly effective infectious bioweapon. It's spread by contact with the bacterium Bacillus anthracis, which humans can pick up just by inhaling anthrax spores. Workers exposed to dead animals or in contact with wool and animal hides are particularly at risk. Even more virulent versions of anthrax can be artificially created in laboratories. According to the National Center for Biotechnology Information, "Anthrax ... is easy to produce in large quantities, highly lethal, relatively easy to develop as a weapon, easily spread over a large area and easily stored and dangerous for a long time."

In 1972, the U.S. and the USSR signed the Biological Weapons Convention, which went into effect in 1975. However, the USSR was still developing anthrax as a bioweapon in 1979 when, on April 2, an accidental leak from a secret stockpile of an artificial anthrax strain in Sverdlovsk, 900 miles east of Moscow, resulted in more than 100 deaths. In a more recent incident in the U.S., a week after the 9/11 attacks, letters containing anthrax spores were mailed to media offices and (later) to two Democratic senators, resulting in 22 people being infected, five of whom died.

So even though SARS-CoV-2 almost certainly isn't a bioweapon, we should be on the alert for future attacks. According to microbiologist Mohammad Moniruzzaman of Virginia Polytech, "Engineering viruses or bacteria is actually not that difficult. Scientists are already modifying bacteria to produce hundreds of different proteins or drug components. It should be possible to engineer a pathway in a bacterium that produces molecules highly toxic for humans." Hopefully, our experience this time around with quarantine, social isolation, hand-washing and contact tracing will give us a heads-up when the next pathogenic bacterium or virus — natural or artificial — comes calling.