"back on the bus" 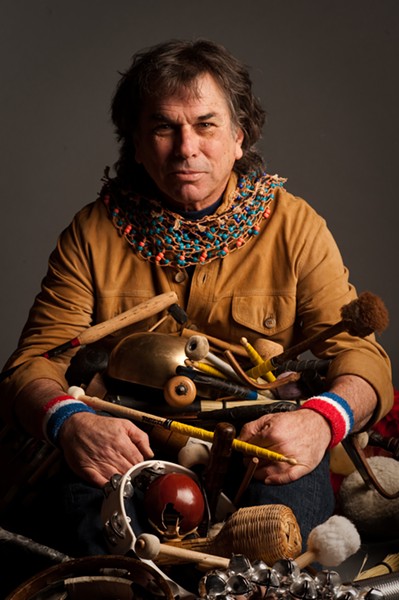 While Mickey Hart is invariably referred to as the drummer from the Grateful Dead, he has long had a life outside of that fabled band. He's travelled all over the planet collecting rhythms and recording musicians ranging from indigenous jungle bands ("Endangered Music") to Tibetan monks. In October he turned 25 albums from his "The World" series over to Smithsonian Folkways (he sits on the board of directors of the Smithsonian's Center for Folklife and Cultural Heritage) making the music available for purchase via CD or digital download from the Smithsonian and other online sources.

He's also done a fair amount of soundtrack work (most notably Apocalypse Now) and fronted a series of bands, including the rhythm-centric Planet Drum. His latest endeavor: The eponymous Mickey Hart Band, "a new band playing new music," he emphasized, calling from his studio in Sonoma County where he was preparing for a winter tour that will bring him to Arcata this weekend.

"The CD is almost done; it should be released in February and we'll be touring quite a bit next year," he said. "I see [this band] as a new frontier. I'm always looking for new music that makes me want to get out and play. I like being on the road; I miss touring... I'm ready to get back on the bus."

Hart plays assorted percussion and a computer he calls RAMU: Random Access Musical Universe. "It's my memory bank of all the sounds — all of them throbbing and pulsing. And I've created electronic instruments for the band. I'm also using the Pythagorean Monochord, a huge instrument with long strings — I called it The Beam when I played it in the Grateful Dead.

"It's a far-reaching group musically, everyone trying to push the envelope, going beyond what they do normally. It's another experiment in ways to make exotic music, or music from the future, whatever you want to call it."

Included in RAMU's memory bank are some truly cosmic things he got from NASA. "There are sounds that come from the epic events in the Universe — from the Big Bang to the sounds of the planets and stars," he said, adding, "and then it's a dance band.

"Everything that moves has a vibration and if there's a vibration there's a rhythm," he explained. "The trick is perceiving that and bringing it to a place where you can interact with it."

Not that it's all space music. "We have new songs by Robert Hunter and myself," he said, then repeated, "and yeah, it's a dance band, a rock ‘n' roll band."

And yes, for all the Deadheads out there, "There'll be some Grateful Dead material in the set as well — I'm not going to leave my legacy on the beach," he said, adding emphatically, "This is not a Grateful Dead cover band."

The Passion Presents dance concert by The Mickey Hart Band is on Saturday, Dec. 3, starting at 9:30 p.m. at the Arcata Theatre Lounge, 1036 G St. Tickets are $35. Details at www.passionpresents.com or mickeyhart.net.