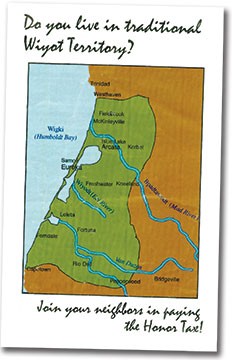 A little over a month from now, across America, people will belly up to plates heaped with festive eats -- turkey and tofurky, potatoes and pie. And they will bow their heads and utter thanks for that bounty and all of the other goodness in their lives. If they have school-age kids, they might add a rote nod to ye olde dinner table of 500-some years past that their forebears were supposed to have bellied up to with their new friends -- newcomers and natives, celebrating good times.

Here, however, the Seventh Generation Fund for Indian Development and Democracy Unlimited of Humboldt County will be placing before us another way to express thanks. They call it an "honor tax," and they want people to pay it to the Wiyot Tribe every year if they live within the traditional Wiyot homeland -- from Bear River north to Little River, and from the coast and Humboldt Bay to the mountains.

The honor tax is voluntary, can be any amount, and is to be mailed directly to the Wiyot Tribe's Table Bluff headquarters in Loleta. But while the Wiyot Tribal Council officially has voted to accept the tax, the tribe had nothing to do with initiating it, says Chris Peters, president of the Seventh Generation Fund, an Arcata-based nonprofit that assists indigenous communities around the world. Peters, who is Yurok and Pohlik-lah, said his organization came up with the idea a few years ago.

"Seventh Generation Fund is located in Arcata in Wiyot territory, that's why we're paying it," Peters says. "And if we were based in Yurok territory, we would do it [there]."

A few others started paying the tax last year. The DUHC and the Fund will roll out the concept to the rest of the public this November.

"It's a time when kids in school are going to hear the story of Thanksgiving that has nothing to do with the reality of what happened," says Kaitlin Sopoci-Belknap, director of DUHC. "It's actually a celebration of a massacre in Massachusetts. And so we wanted to interject a different story around Native sovereignty."

That story locally, and much more recently, is that white settlers killed and displaced the original people living along Humboldt Bay and in the surrounding region. But, adds Sopoci-Belknap, "it isn't really about shame or guilt."

"The intention was not to make people pissed or defensive," she says. "It's about honor. It's a recognition of the sovereignty of the tribe. And it's an entry way into a bigger conversation. You know, we go day to day about our lives and we don't think about the fact that we are living on Wiyot land. So we wanted to put it before people and give them a chance to think about what that means, to talk about it."

Peters sees the tax as a means to begin re-connecting all people to the land. "Historically, for thousands of years, this was Wiyot territory and there is a presence on this land that folks need to be conscious of," he says. "But that relationship with the land and spirit is broken now, and a step toward that re-connection --of all peoples -- is first to acknowledge it's broken. And we find that the best acknowledgment in American society is to reach in your pocket for a little bit of dollars. It may seem an easy way out, but at least it's a conscious effort to say, 'I understand now.'"

So who else has paid the tax? Well, Paul Pitino, a former Arcata City council member, paid about $60 last year and will pay the same this year. Pitino, who's self-employed, figures he can afford to pay 5 percent of what he pays the federal government in income taxes. "To me," he says, "it's like a fee I'm paying to live on their property."

The Green Party of Humboldt County paid $100 last year, says Dana Silvernale, the GPHC's county council chair. "Since we are reaping the benefits of the beautiful land that we live on, which doesn't really belong to us, that was taken from the Wiyot, we feel like we owe them something in return," she says.

Humboldt State University Sociology Professor Jennifer Eichstedt says the honor tax is about "doing what's right" -- similar to how Eureka City Council members viewed returning some of sacred Duluwat (Indian Island) to the Wiyot several years ago. It's a step toward mending the decades of accumulated slights and major traumas that manifest into what Eichstedt calls transgenerational grief.

"If you do not actively work to heal these things, they fester," she says. "Some people will say, ‘Get over it, we won.' To those people I say, what if somebody came into your house and colonized it, and they beat you and put you in a pen in the backyard? And said they could do that because 'they won'?"

Wiyot Tribal Administrator Maura Eastman says the honor tax goes into the tribe's general fund. She likes that it's voluntary.

"I don't think the tribe would ever go out and try and solicit taxes from people," Eastman says. "For the tribe I think the value is more in the thought than in the actual dollars. The fact that someone would acknowledge the homeland of the Wiyot is the most important part ... rather than trying to make reparation for a time none of us living now had a part of."

Peters says Humboldt is the first place to initiate an honor tax, although he has heard from communities in Minnesota and Arizona who are interested in doing something similar.

"Our intention," says Sopoci-Belknap, "is to let people know that they can do this no matter where they live. Because, pretty much everyone in Northern America is living on someone's land."