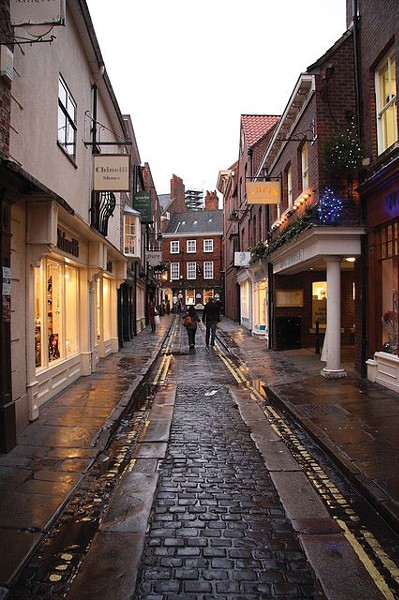 Richard Croft/Creative Commons license Grape Lane, formerly Gropecunt Lane, in the heart of York in northern England, was the city's center of prostitution in the Middle Ages.

Soon after I moved from London to New Zealand in the 1960s, I was taken aback when a Kiwi friend referred to a mutual acquaintance as "a good cunt, he always does what he says he's going to do." Until then, I'd only heard the C-word used in a derogatory sense. In southern England at the time, to call someone (always, in my memory, a male) a "cunt" was to say he was the lowest of the low; no other insult came close. Yet in New Zealand and, I later learned, Australia, Quebec and Barbados among other places, it was used as a lighthearted term of endearment. Had I been from Northern England, I might have thought the same.

I included Barbados because of Rihanna's notorious diamond-studded "CUNT" necklace. In an interview with British Vogue, the pop star (and ambassador for Barbados tourism!) said, "That word is so offensive to everyone in the world except for Bajans. ... When I first came here, I was saying it like it was nothing, like, 'Hey, cunt,' until my makeup artist finally had to tell me to stop."

Most etymologists believe the word originated as an inoffensive term for female genitalia, coming from the Latin for vulva, cunnus (curiously a masculine noun, unlike vagina, meaning "sheath"). Its cognate cuneus, "wedge," gives us "cuneiform writing," made by pressing the triangular end of a thin stick into soft clay.

So when did the C-word evolve into what Australian feminist writer Germaine Greer (The Female Eunuch) called "one of the few remaining words in the English language with a genuine power to shock"? Even in countries where it is offensive today, it wasn't always so. In England sometime before 1325, a book of proverbs included the sage advice to "give your cunt wisely and make demands after the wedding." And in the Middle Ages, Gropecunt Lane was a common street name in red-light districts. Today Grape Lane, a block south of the York Minster cathedral, reminds us in a bowdlerized way of its history.

But by Shakespeare's time, the word was taboo enough that the playwright had to use the word obliquely to avoid censure by the Lord Chamberlain. Hamlet, for example, teases his girlfriend, asking if he can lie in her lap. When Ophelia says no, he replies, "I meant my head in your lap. ... Do you think I meant country matters?" (Of course he did.)

Fast forward to the 20th century, when D.H. Lawrence's iconic novel Lady Chatterley's Lover made waves with repeated use of the word in question, along with F-bombs. "Cunt! Eh, that's the beauty o' thee, lass!" says Mellors the gamekeeper to Lady Constance Chatterley, having just introduced her to the word. For 32 years, from its publication in 1928 to a landmark trial in London in 1960, only an expurgated version of the novel was available in Britain. At the trial, the chief prosecutor showed how out of touch the establishment was with changing mores when he famously asked if the book was the kind "you would wish your wife or servants to read." (I like to imagine a juror replying, "Fuck yes!")

And then there's the Scunthorpe Problem (which rates its own page in Wikipedia), in which profanity filters have prevented residents of the English town of that name from signing up with AOL or listing their businesses online. Shakespeare could have solved their dilemma: Scounthorpe, anyone?

Barry Evans (barryevans9@yahoo.com) agrees with linguist Steven Pinker that the 16th-Century taunt "kiss the cunt of a cow" is due for a revival because of its fine alliteration and meter.