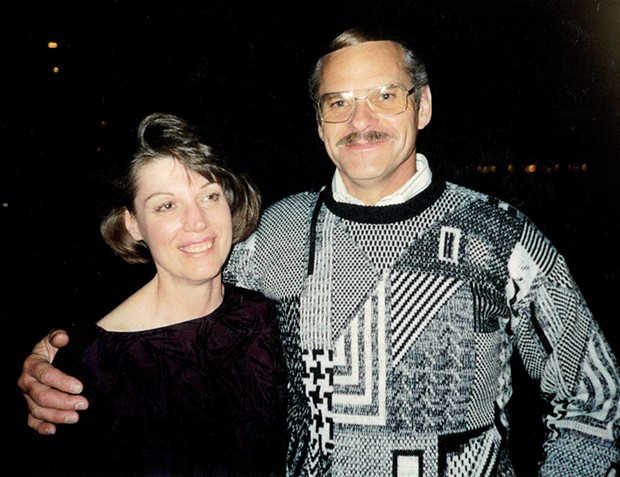 The county of Humboldt has agreed to pay a local woman $1 million to settle a civil lawsuit alleging employees purposely misled the court to secure orders that forced her dying husband to take medication against his wishes, violating his fundamental right to make end-of-life decisions, including whether to receive care.

This was despite an advance care directive Dick Magney had drawn up by an attorney to lay out his final instructions, which included being allowed to die with "dignity" and "without prolonging my death with medical treatment ... that will not benefit me," as well as his doctor's assessment that any further treatment was "futile."

Unanimously approved by the board of supervisors in closed session March 5 (with Virginia Bass absent) and officially signed by the parties last week, the settlement was reached almost four years to the day after Dick and Judith Magney first found themselves fighting to regain control over the most intimate aspects of his personal affairs.

It was a legal battle the couple would ultimately win, with Dick Magney living long enough to see the county's temporary jurisdiction over his medical decisions reversed and a petition for conservatorship denied.

What the self-described "stubborn Swede" did not survive to see was the stunning rebuke of the county's actions handed down by an appellate court in October of 2016, one year after he died at the age of 74.

In a rarely published opinion, the panel of justices used phrases including "beyond the pale," "appallingly inadequate" and "lack of candor" in assessing the county's conduct, saying Deputy County Counsel Blair Angus seemed to have the view "that if Humboldt needed to be duplicitous to get an order compelling treatment, so be it."

"In sum, Humboldt was not merely negligent in preparing its petition and request for an order compelling medical treatment under the Health Care Decisions Law; it knowingly and deliberately misrepresented both the law and the facts to the trial court," the opinion states. "We would find such conduct troubling in any case. In the instant context we find it profoundly disturbing."

In contrast, this month's settlement is a sterile six-page document that seemingly belies not only the allegations lobbied against Judith Magney by the county but the scathing assessments of those actions from judges and others involved in the case. There is no apology or admission of liability, just a litany of legal jargon laying out the terms of the agreement and which parties are covered.

"We're glad it's resolved and that's about all we really want to say about it," County Counsel Jeff Blanck says, adding that the $1 million payment will be covered by the county's insurance risk pool.

The county came to the settlement table less than three months after a U.S. District Court judge paved the way for the bulk of Judith Magney's civil case to continue, finding the constitutional right of "medical autonomy" was an issue that concerned "the process of deprivation and not simply the deprivation itself."

While the county had been dismissed from the suit by that time — with Judge Haywood Gilliam finding there was not enough to sustain the allegation that the county had "a custom or policy of challenging" advanced care directives — its responsibility for the actions of employees who remained as named defendants continued.

But at the end of the day, none of this ever should have happened, according to attorney Allison Jackson, who represented the couple in their months-long legal battles with the county and, later, litigated Judith Magney's civil rights lawsuit.

The ultimate responsibility for what unfolded, Jackson says, lies at the feet of the county counsel's office, which could have stopped this incursion into the most personal aspects of the couple's lives at their most vulnerable moment in a "nano second," had the attorneys there simply done their "duty" from the very beginning.

"All of this could have been avoided, with zero money being paid and zero pain to the Magneys," Jackson says.

After them, in her opinion, comes Schwartz, Hillman and Ringwald — with Ringwald admitting in testimony, according to the appellate court, that she "personally disagreed" with the grim diagnosis from Dick Magney's physician and decided with her supervisors to "challenge" the clinical assessment, as well as the patient's mental capacity to choose palliative care.

That "conspiracy" was continued by Schwartz, Jackson says, when her office made an unsuccessful bid to take over Dick Magney's affairs, going so far as to refuse to disclose medical information to Judith Magney during a temporary conservatorship.

"How dare she?" Jackson asked. 'How dare anyone? ... She deprived the family of knowing how (Dick Magney) was doing and didn't give a damn."

Jackson emphasizes that it's important not to paint all county employees with the same brush and — as a former prosecutor who specialized in crimes of sexual violence and those against children — says she understands the difficult job social services workers have, seeing some of the worst sides of society while trying to protect the community's most vulnerable citizens.

Unfortunately, that's not what transpired in the Magneys' case, she says.

Jackson notes that Hillman and Ringwald each claimed "substantial hardship" in requesting waivers from having to personally appear at a March settlement conference where the agreement was reached and cited their lack of "authority or financial control over the amounts offered."

Both also declared that they had "no intention of agreeing to any settlement" that would require them to admit they "intentionally or recklessly violated Mr. Magney's constitutional rights" or otherwise "admit fault."

"They still to this day refuse to apologize," Jackson says.

Neither remains employed by the county and Ringwald, who now lives in Tennessee, reported that she is suffering from a "serious medical condition" in her filing.

The case all began back in February of 2015, when a mandated reporter placed a call to Adult Protective Service after Dick Magney was admitted to St. Joseph Hospital, which led to an investigation into possible caretaker neglect — allegations the county never took any action on.

By all accounts, he was in dire condition on arrival, suffering from a series of life-threatening ailments and desperately poor hygiene. The couple, in consultation with Dick Magney's doctor, decided to do what could be done to make him comfortable but not to pursue any course of treatment.

Then, without warning, came notice that Adult Protective Services had received a court order that required the former truck driver to be given antibiotics for a heart infection, immediately reversing the palliative care decisions previously made by the Magneys and his physician.

Conspicuously absent from court petitions proclaiming the need for the county to take over Dick Magney's medical decisions — replaced later by the ultimately unsuccessful efforts to have him put under a Public Guardian's Office conservatorship — were mentions of Dick Magney's treating physician, who had already concluded that he faced a "really terrible quality of life" in the unlikely event he made any form of recovery.

"What bothers me is how they had no qualms about lying or being duplicitous," Jackson says.

In August of 2017, Reinholtsen ordered the county to pay Jackson and members of her firm a little more than $211,000 for representing the Magneys, citing that they took on the case despite a risk of never being paid as one factor.

The judge also noted a section of the appellate court's decision, which states "we ordinarily would remand the matter to the trial court to exercise its discretion as to whether to award fees. However, given the record in this case, in our view the court's discretion can only be exercised in one way — by granting Mrs. Magney's request for fees."

Meanwhile, according to Jackson, Judith Magney is simply "four years older now." When asked how she was doing by the federal judge during settlement talks back in March, Jackson says Judith Magney talked about how she was able to find some solace by sitting at her husband's gravesite and talking with him.

That, Magney told the judge, "sustains" her and brings her some peace, Jackson says.

"What she did, she knows she had to do," Jackson says.