'Covering your Own Trial' 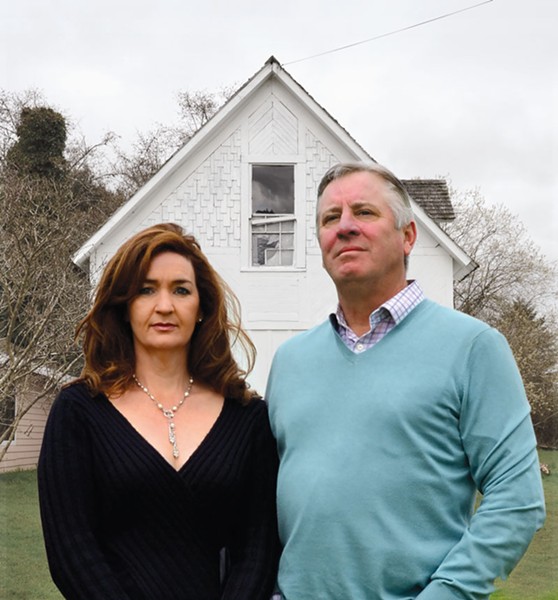 Back in February 2013, the Journal ran a cover story about Stuart and Caroline Titus under the headline: "Ferndale Gothic: She runs the newspaper. He's the mayor and the freshly ousted fair manager. It's messy." We had no idea.

Earlier this month, an anonymous letter — copied hundreds of times over — reportedly arrived in unison at each of Ferndale's 600 or so residences. Titled "When Does Journalism Become Vigilantism?," the three-page missive lambasted the Tituses, particularly Caroline's reporting on the Humboldt County Fair Association for the Ferndale Enterprise, the weekly newspaper she owns, publishes and edits.

To the Tituses, the letter is just the latest assault in the 18-month-old wrongful termination lawsuit they brought against the fair board after it opted not to renew Stuart's general manager contract. Up to that point, he'd held the position for 22 years to generally glowing reviews. But the letter's tone and content are shocking, and illustrate just how nasty and divisive the lawsuit has become, and how sticky reporting the news can get in a town of 1,300 or so residents.

The Tituses moved to Ferndale in the early 1990s, when Stuart was offered the dream job of running the fair in the town where he'd grown up. His family had roots dating back generations. Caroline, who'd majored in journalism at Sacramento State University, soon found herself writing for the Enterprise, and was eventually named its managing editor in 1995. She bought the then-struggling paper from Peter Hannaford in 1998.

Over the years, Caroline — with her big-city sensibilities, persistent reporting and nose for following a story to the end, regardless of who it pissed off — has been both celebrated and bemoaned in the small, close-knit town. Her reporting on the abrupt resignation of former Humboldt Creamery CEO Rich Ghilarducci in 2009, and his subsequent federal fraud case, was the go-to source for news on the iconic century-old company's collapse and Ferndalers reveled in Caroline's ability to keep them informed. But in other instances — like the city's flap over permitting an openly gay psychotherapist to see patients at his Ferndale home, allegations that Ferndale High School football fans hurled racial slurs at opposing players or the legal transgressions of local officials — her reporting has been controversial.

But nothing in Caroline's run at the helm of the Enterprise compares to the saga that has unfolded in the wake of the Humboldt County Fair Board's Jan. 7, 2013, 13-7 vote not to renew Stuart's contract. The Tituses filed their suit in March of 2014, alleging that the association fired Stuart in retaliation for his unwillingness to keep Caroline from writing things that made board members "look bad," as well as his repeated reminders that the board should abide by state open-meeting laws, an issue Caroline covered with aplomb. In court filings, the fair association countered that Stuart's job performance and the way he interacted with board members were solely responsible for the decision to let him go.

If relations were tense prior to the Tituses' lawsuit, they've gone nuclear since. Caroline has continued to report on the fair board, documenting its financial problems and the fair's declining attendance, and even filed a California Public Records Act lawsuit to force the association to turn over financial records. (The suit settled when the association agreed to turn over the sought-after records. A request by Caroline's attorney for more than $90,000 in attorney fees is pending with the court). The Tituses have also asked the FBI to investigate allegations that the association hacked into Stuart's private email account.

Then, in July, attorneys representing the fair association in the wrongful termination lawsuit sent out subpoenas for Caroline's gynecological and medical history. The attorneys told the court that the records would buttress their defense theory that Caroline had one or more extramarital affairs that caused Stuart to fall into a depression that impacted his job performance. "Several directors will testify that the performance of Mr. Titus deteriorated over time," one court filing reads. "They will testify that he was distracted, prone to outbursts and consumed too much alcohol. There will be an abundance of evidence that the Tituses' marriage was in serious trouble. This evidence will include testimony that Ms. Titus had an affair ..."

The Tituses' attorney, Peter Martin, immediately asked United States Magistrate Judge Donna Ryu to quash the subpoenas, arguing that the turning over the records would constitute an invasion of privacy and that the defense theory didn't hold water, as the alleged affair took place between 2004 and 2008 and Stuart received sterling performance reviews until the date his contract wasn't renewed. In a ruling issued Sept. 15, Ryu agreed, ruling that the defense's claim that it will produce testimony of an affair "does not justify a fishing expedition into Ms. Titus' most private and intimate medical records."

Almost exactly a month later, on Oct. 14, the anonymous letters criticizing Caroline's reporting showed up in Ferndale mailboxes. "What you don't read about is Mr. Titus's dysfunctional management of the HCFA following a downward spiral in his life that appears to have started in 2005," the letter states. "Although many residing in the small town of Ferndale were aware of it, and actually witnessed their late night rendezvous, Mrs. Titus has never reported that from approximately 2004 - 2008 she was having an affair with Ferndale resident Richard Leonardo. There are also no reports in the Ferndale Enterprise about Mr. Titus' heavy drinking that followed."

The letter goes on to say that Caroline's reporting is dishonest and slanted. "Anyone reading the articles authored by Mrs. Titus should be reserved in their opinions since nearly every article contains misrepresentations and her self-serving perceptions that significantly distort the facts," the letter states. "Mrs. Titus is too ignorant to realize that subscribers, and everyone in the town, are sick and tired of reading about her personal war against the HCFA ... Ferndale is a delightful town with lots of fine stories that could be told, however Mrs. Titus is consumed by this and can find nothing better to do with her time. Mrs. Titus is clearly a woman obsessed that should consider seeking psychiatric counseling."

While being deposed under oath in the case, Caroline denied ever having an affair with Leonardo and her reporting of the case and Ryu's ruling appeared above the fold of the Oct. 22 edition of the Enterprise, which contained at least 18 letters to the editor criticizing the anonymous letter writer. Like all of Caroline's reporting, the story ran without a byline but contained a disclaimer noting that she is the editor and publisher and married to Stuart.

From a journalistic standpoint, the situation is far from ideal. Caroline has repeatedly said she doesn't want to be reporting on stories she's involved in but that the Enterprise is a tiny, shoe-string operation (in addition to editing, publishing, reporting, taking photos and laying out the paper, Caroline also does its books, sells its ads and even delivers it most weeks). If she had the money to hire a reporter, she would. But she doesn't.

Fred Brown, vice-chair of the Society of Professional Journalists Ethics Committee, said the hard rule in journalism is "a reporter should never cover, as a news story, an event or issue in which he or she is directly involved." But Brown softened when hearing that Caroline is essentially a one-woman newspaper in a town of about 1,300 people. "It's hard to avoid conflicts of interest in a small town," he said, adding that he once worked for a small-town paper where his boss was a member of Rotary who wrote about Rotary. "Now, that's not as much of a problem as covering your own trial. It makes me uneasy. I just wish there was some other way to cover that story ... Maybe the answer is for her to take a more personal approach, to write in the first person and not present the coverage as being objective."

For better or worse, objective or not, it seems those wanting to keep weekly tabs on the Tituses' lawsuit against the Humboldt County Fair Association as it twists and turns through the court system only have one place to turn: The Enterprise. That, or maybe those anonymous letters will continue.

Editor's Note: This story was updated from a previous version to more accurately reflect the scope of Caroline Titus' California Public Records Act request to the Humboldt County Fair Association.