Creatures of the Shallows

The good news is that you don't have to go scuba diving on a tropical reef to see beautiful and charismatic sea creatures. We have our share of them right here along California's rocky North Coast. And many are in shallow water where snorkeling or careful rock hopping can reveal them. The bad news is that our water is always cold, usually rough and mostly murky. And the best tides for viewing are super early in the morning in the springtime or after dark in winter. However, during any decent low tide you can always see hermit crabs and it's possible to see brilliantly colored sea slugs, brilliant anemones and even an occasional octopus if you're lucky.

My family and I like to snorkel for the best results. And we usually focus on sea slugs (aka nudibranchs), bottom-dwelling fish, octopus and any oddballs. Most nudibranchs are easy to spot and they are cooperative for the camera. Bottom fish are more difficult to spot but are often cooperative and can even become aggressive during their winter spawning period. Octopus are also best seen at night but they will even occasionally leave the water to travel from pool to pool in broad daylight.

The cameras we use are simple waterproof point-and-shoot jobs, which have an advantage over professional gear with external strobes when shooting in tight quarters. Almost all our pictures are shot in macro mode with the lens often an inch or less from the subject, which is why the water looks so clear. And while open water may have 10 feet of visibility on a good day, large pools and protected backwater areas can clear up nicely at low tide. Of course, it doesn't actually feel like the tropics until you sit in front of the computer with the heater on to see if any pictures turned out.

See the full slideshow of colorful creatures below.

We have several species of colorful anemones on our local rocky shores. Some species of anemone exhibit much variation, so there's an endless supply of color. 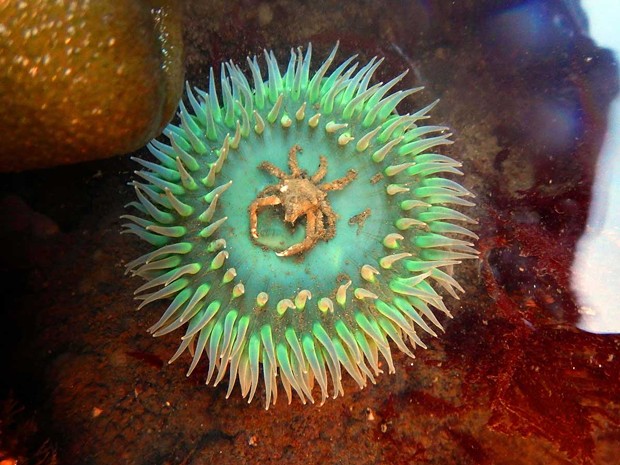 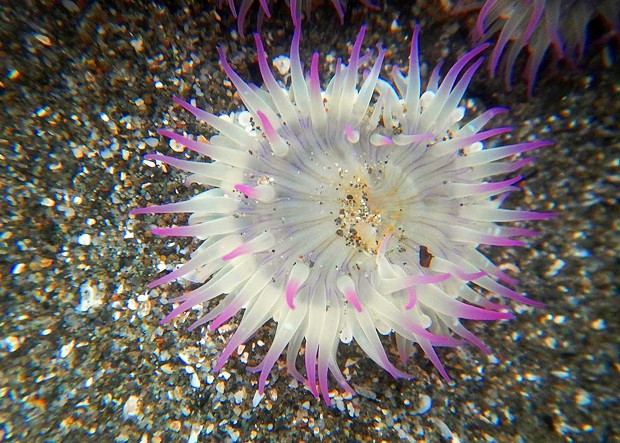 There are other kinds of sea slug, but the nudibranchs are the most common and conspicuous. "Nudibranch" means naked "naked gill," and the gill is the bunny-tail plume visible in some of these pictures. Various nudibranchs are able to "borrow" toxins, stinging cells and other defensive material from their prey to incorporate into their own bodies.

While the tropics have many nudibranchs with absolutely psychedelic colors, they are less common in the hot, tropical intertidal zone than in our temperate zone. So we're pretty lucky, so far. 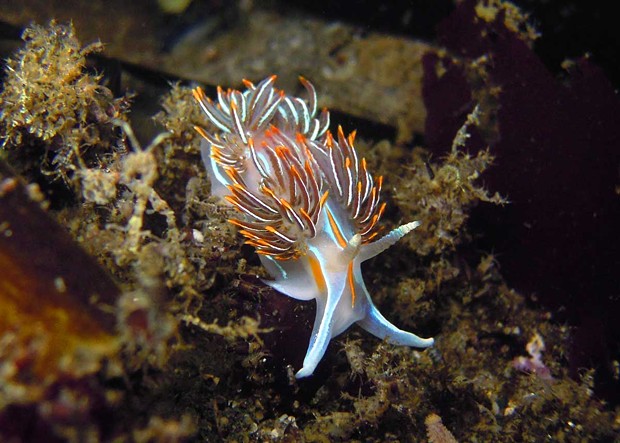 Slideshow Creatures of the Shallows