Crimes Against Nature: Poaching Takes its Toll on the North Coast 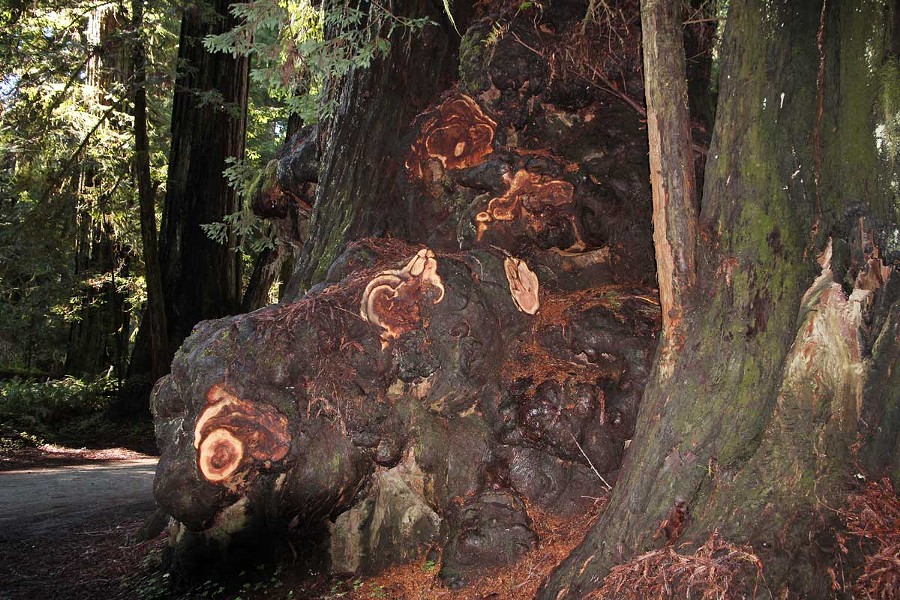 Photo courtesy of National Park Service A parks worker stands by a redwood in 2013 to show the massive scope of the poacher's cuts.

They come at night, under the cover of darkness, traversing the back roads of Redwood National and State Parks, home to much of what remains of the world's last old growth redwood stands.

Carrying chainsaws and wearing headlamps, the thieves often take side trails to scour the towering trunks for knobbed growths that encase intricately patterned wood that can fetch hundreds, if not thousands, of dollars on the unregulated burl market.

Sometimes their cuts are measured, leaving the wounded tree a chance at survival. Other times, the damage is too severe — the hacking slashes marking certain death for the forest giants. In one of the worst documented cases, a 300-year-old tree was cut down just so a poacher could get at a massive burl located 50 feet up its side.

Coveted by woodworkers for crafting everything from artisan bowls to clocks and coffee tables, old growth redwood burl can draw a hefty price, but trading in pilfered wood can come with a high cost — not just for a singular tree but also the species' future.

Most commonly found at the base but sometimes occurring higher up, burl is the main way redwoods reproduce — the other being by seed — with the knotty bulbs holding genetic tissue capable of sprouting an exact replica of the parent tree, known as a "clone."

Sometimes these result in the almost magical production of "fairy rings," nearly perfect circles of redwoods that share a common heritage — with a potentially 2,000-year-old tree producing an offspring that could go on to live another two millennia before doing the same. Cutting off the burls can interrupt this propagation process and leave the trees vulnerable to disease and infection.

"Redwoods have an amazing strategy to persist in the environment but that's pretty hard to overcome — after a chainsaw gouges into your tissue," says Leonel Arguello, the park's joint chief of resource management and science. "In significant amounts, that's a pretty difficult thing for an individual tree to recover from."

Just how many times burl poachers have struck in the park is hard to say. They take care to hide their tracks. But there are at least 16 known poaching sites in the Humboldt County portion of the sprawling 133,000-acre preserve and another dozen or so in the Del Norte section.

"It's terrible. It's super frustrating," park ranger Stephen Troy says. "The obvious reason, for most people, including myself, is the damage itself can't be undone. There is no fixing what happened to these trees. It's such a unique and valuable resource. There's no other place like it in the world.

"We feel like they're just trying to make a quick buck. ... It's just sad to see such an amazing resource get damaged for something petty," he adds.

What Troy does know is there most certainly are more poaching locations yet to be found. He says it might sound strange but there's almost a sense of excitement when one comes to their attention. Now, at least, he says, there is a starting point — a chance to hold someone responsible.

Then, just like any typical crime scene, an investigation launches, often including surveillance, interviewing potential suspects or witnesses and serving search warrants.

"The big thing for these is having somewhere in the park that we can tie it to," he says.

Sometimes, if the suspect burl chunk is still relatively whole, matching it back to the damaged tree is as simple as bringing it back to a poaching site to be lined up with the tree like a jigsaw puzzle piece, where it can "fit right back in there because it was so unique," Troy says.

"You can usually tell right off the bat," he says.

Other times the pieces have already been cut up or turned in the woodworking process, in which case scientific techniques can be used to tie the two back together.

Zane Moore, a doctorate student in botany at the University of California at Davis, explains that each tree's rings provide a "unique 'barcode' or 'fingerprint' that is extremely unlikely to match any other tree perfectly."

"By aligning the tree rings in the burl wood to the suspected tree on National Park property, one could determine without a doubt whether there is a match or not," he says in an email to the Journal. "If there is any doubt, one could look more closely under a microscope (at) the cells that make up any given ring. Looking at those cells and their grain (direction of growth), they should match. This is a good way of 'verification' if the tree rings alone are not convincing."

He notes that the tree ring test works "best in a burl's case, because the shape of the burl (and rings) over time will be unique for every single burl."

"Tree rings whorl around just like a fingerprint and the rings on a burl will only match one tree perfectly," Moore says.

While burl poaching is nothing new, park officials say they've seen an uptick in recent years.

The most recent case was discovered in January during a routine patrol, and ultimately lead to the arrest of an Orick man. Troy says he's limited in what he can say about the case, which has been forwarded to the Humboldt County District Attorney's Office, but he does expect more arrests in connection with the incident, which involved an old growth stump.

Meanwhile, a spate of incidents in 2013 and 2014 shined an international spotlight on the issue after officials discovered at least 18 cases on park grounds in rapid succession, including the brazen tree felling.

The national media featured pictures of the aftermath, including spreads in the New York Times and National Geographic, with several showing the shocking image of a ranger dwarfed by massive cuts into one trunk that measured some 8 feet high.

Eventually, two men would be sentenced, with one receiving 700 hours of community service and ordered to pay an $11,000 fine. The other received a suspended sentence and three years' probation, according to news reports.

Troy says the onslaught of coverage helped stem the burl poaching tide for a time, but the search is always on. It's an endeavor stymied not only by the immense expanse of the parks but also the fact that the poachers often appear to be familiar with the area and take pains to conceal what they've done.

"It's really hard to know because they don't do anything really immediately apparent," he says. "So, they go off trail and typically do it on the back side of the tree. They take the effort to hide it, so we have the idea that it probably happens more often then we know about."

There is a certain modus operandi the poachers tend to follow: They almost always strike at night but stick close to roads because the bigger burls can weigh hundreds if not thousands of pounds. In some cases, the poachers position themselves uphill, so they can slide the larger ones down to a waiting truck.

Often, they will hit the same tree or redwood stand over and over again until the damage is discovered.

It is, Troy notes, no simple operation. These are people who know how to handle chainsaws under challenging circumstances, in the dark and on uneven terrain, and are able to move large pieces of wood.

Arguello says park officials know the "general zone" poachers will target, noting the thieves are not going to walk a mile into the forest to get the burl, but he says that's still not enough.

"It doesn't help in the long run of catching the bad guys and that's what the rangers are faced with — finding the guys that do this work and it's not easy," he says. "Unfortunately, there's no technology, really, to make those detections and have a response quickly. We're a big park."

Woodworker Bernie Korbly, who sells specialty redwood pieces at his shop, Korbly Wood Products in Miranda, agrees. He says it's "bad karma" to use purloined wood and he only buys old stumps from trees felled long ago on private properties directly from the owners.

"Most people I know in the business are very conscious about using wood properly," he says. "There's plenty of wood out there. Why do you have to steal? ... Let's leave the park alone. They're beautiful. Let's not take anything away from them."

Arguello say he favors a chain of custody requirement to track burl "from forest to retail," a system that other countries like Chile have implemented to tackle the illegal trafficking of rare woods.

"If there was something in place, that would be helpful," Arguello says.

The pillaging of wildlife is an ongoing issue not only at Redwood National and State Parks but around the world. A 2016 Interpol and United Nation's Environmental Program report on the illegal trade of natural resources — ranging from deforestation to the killing of endangered species like rhinos to overfishing — called the rise in such practices "astonishing."

"Environmental crime has impacts beyond those posed by regular criminality. It increases the fragility of an already brittle planet," the report states. "The resulting vast losses to our planet rob future generations of wealth, health and well-being on an unprecedented scale."

While many of the worst offenses take place in developing countries, the United States — and by extension the North Coast — is not immune. On the East Coast, for example, ginseng root is under siege in the Appalachians while the Venus fly trap — which only grows naturally in the wild in a small portion of South and North Carolina — is also threatened.

Closer to home, the California Department of Fish and Wildlife announced this month that a trio of international plant smugglers pleaded guilty to stealing thousands of succulents from local seaside cliffs to sell on the Asian market.

Meanwhile, abalone poaching is a constant scourge that is only likely to increase in the region with the closure of this year's recreational season due to a dire plunge in the sought-after shellfish's population, caused by what scientists are calling a "perfect storm" of ecological conditions most likely related to climate change.

Among the most frustrating aspects of burl poaching, Arguello notes, is not only the destruction left behind but the fact that it's completely unnecessary considering the sustainable harvesting options available.

In the mid-1850s, some 2 million acres of old growth redwood forests stretched along the coast between Monterey and the Oregon border, according to the park. Today, less than 5 percent remains with most of the original stands now protected inside national and state parks in California.

"People are stealing from a World Heritage resource and leaving behind a disfigured tree," Arguello says. "It's just wrong. These resources do not belong to individuals, they belong to all of us. That is why we set them aside."

"The rings on a burl will only match one tree perfectly"

"There's plenty of wood out there. Why do you have to steal?"