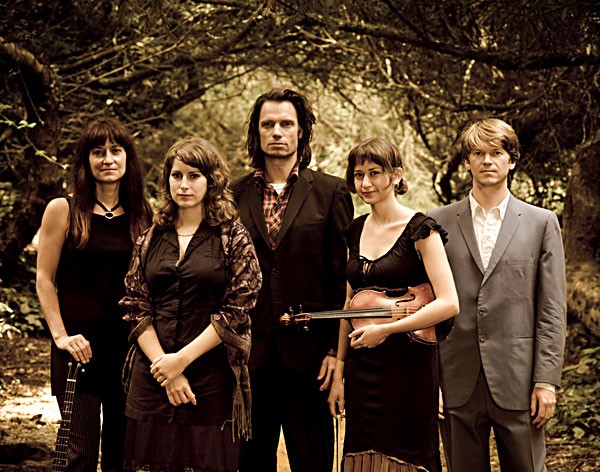 Crooked is not a term most would associate with music, but that's how Susan Anderson described a tune played by the local Quebecois band, Mon Petite Chou, at the Humboldt Folklife Festival last Saturday. I knew what she meant because a few years back, when I interviewed Jeff Kazor, leader of The Crooked Jades, he used the word while tracing the roots of the music his band plays.

He explained that the Jades focus on "pre-radio" old time music from the American South. "It's unconventional in a sense; they use a term - crooked - meaning that the measures are uneven so it sounds a bit odd," he told me.

I'm by no means a music scholar so I was uncertain about the term "uneven." He gave a very technical definition regarding shifting meters, then continued. "To make it a little more clear, what [sprang from] old time music was bluegrass. Bluegrass took a lot of the tunes and squared them all up ... made it more conventional. It seemed like a sad thing that bluegrass homogenized all this music. It made me even more interested in getting as much of this old stuff to play."

Always expanding his old time music repertoire, he looks for unusual songs. "Usually what grabs me quickly is anything that has some unconventional aspect. And obviously lyrics are a major part. Sometimes I'll find amazing lyrics in these old songs -- there's a simplicity that tends to draw you back to the time it was written; sometimes that was in the late 1800s."

Why are people still interested in this old mountain music? "In part because of the novelty, that's an unfortunate part," said Kazar. "Most people have never heard this music ... Bill Monroe and especially the Stanley Brothers took all this old time music and put their spin on it, which labeled it as bluegrass. Of course Ralph Stanley, to this day, does not call it bluegrass. He'll say, ‘It's mountain music.' That's another thing that propelled me to dig deeper."

Humboldt's own Striped Pig Stringband is engaged in a similar exploration, particularly in connection with old time dance music. They've pretty much single-handedly revived the square dance form for the younger set at Folklife Barn Dances. On Sunday, Aug. 9, Striped Pig shares a bill at the Arcata Theatre Lounge with The Crooked Jades and local neo-old time jammers The Bucky Walters, but first The Jades play for a Saturday night Folklife Barn Dance at the Arcata Veteran's Hall. Be prepared for some crooked dancing.

Incidentally, the Folklife folks are also sponsors of Saturday's Buddy Brown Blues Festival out in Blue Lake (see our Calendar section for details) and want everyone to know that the Barn Dance starts after the fest ends, so you could attend both if you choose.

Those who want to get in the mood for the Blue Lake blues fest may want to stop by the Wave Friday. Ace blues harpist/vocalist Phil Berkowitz will be there with some bluesy friends from S.F. Phil's specialty is jump blues in the Louis Jordan vein, in fact he has an album titled, Phil Berkowitz Plays Louis' Blues: The Music of Louis Jordan.

By chance, there's another square dance the day after the Jades leave town. Humboldt Hoedowners mark their 58th anniversary on Monday, Aug. 10, with a dance and potluck at the Eureka Veterans Memorial Building. Joe Saltel calls and Joan Tonini cues the rounds for some old school square dancing, the kind with guys in cowboy hats and women in petticoats do-si-doing.

Saturday, around the time the Jades finish up at the Vet's Hall, another Southern roots stringband takes the stage at the Jambalaya. The Pine Hill Haints take their name from the Pine Hill Cemetery in Auburn, Ala., where they used to practice. Exploring similar old time territory, a bit more loosely, and throwing in rockabilly and honky tonk elements, they describe their music as "Alabama ghost music." They're also planning an in-store performance at Missing Link Records that day, 5-ish. "They fall right into that old time thing," says Matt from Missing Link, "but they have a wider range. They play washtub bass and washboard and seem to run the gamut in the old timey country feel." The in-store is in association with HFRA, the Humboldt Free Radio Alliance, to raise awareness about what the pirates are up to (but not too much).

You can hear yet another kind of southern music Thursday evening, Aug. 6, at F Street Plaza (at the foot of F on the Eureka Boardwalk). Former Sundogs fiddler Tom Rigney and Flambeau play Louisiana Cajun and zydeco two-steps laced with funky New Orleans grooves and low-down blues. That one's part of the Eureka Summer Concert Series, and it's free.

Arcata MainStreet launches a similar series of concerts on the Plaza Sunday afternoon with a show by Moonalice, an all-star psychedelic rock band from the Bay Area whose membership includes guitarist G.E. Smith from the Sat. Night Live Band, Barry Sless from David Nelson Band, Pete Sears from Starship and Hot Tuna, Jimmy Sanchez from Bonnie Raitt's band, Ann and Roger McNamee from Flying Other Brothers and sometimes Jack Casady of J. Airplane and Hot Tuna fame. Not bad for free.

You may recall mention in a previous Hum about the eclectic nature of the bookings at Nocturnum. This week's no exception: Friday it's Oakland's heaviest metal trio, High On Fire, along with Brooklyn's Early Man and our own Dragged by Horses. The club shifts into hip hop mode Monday, Aug. 10, with another Oakland band, The Mystic Journeymen, a subdivision of Living Legends.

Six Rivers has back-to-back jazz/rock/jam trios this weekend: First up (Friday) Forever Growing, a guitar/bass/drums combo from Eugene on what seems to be a brewery tour. They add classical influences to the mix. Saturday it's the return of Critical Measures Trio, a Petaluma combo on the funkier side with former local Todd Bugabee on guitar.

You might have heard a little about fusion jazz bassist Tommy Lockett, who has been stirring things up since returning to Humboldt from L.A. I've talked with him a few times, but he's a straight-to-the-point guy, and it took a note from jazz fan (and Kaleidophonic Jazz deejay) Alan Olmstead to hip me to Tommy's impressive history:

"Tommy is a Humboldt native, graduating from Eureka High in the early '70s," writes Olmstead. "He was active in a local progressive jazz band and in the CR jazz band under Jerry Moore. He moved to Boston when he was accepted into the prestigious Berklee School of Music and studied with many storied jazz teachers and players. His next major accomplishment was as music director of the legendary Pickle Family Circus in the mid- to late-'70s that performed regularly on the North Coast ... Tommy went on to be a regular session musician in the L.A. scene for many years and has played with everyone from the Academy Awards orchestra to Frank Zappa. He has been working in Hollywood for the last dozen or so years doing film scoring and production with credits including Perfume, Aeon Flux and most recently RocknRolla. Even more recently he started his own label, Heat Records (.com) and has a number of excellent releases of his own and other's work, including John Stowell. John is another monster player on jazz guitar with a lot of history and recognition ...."

Outfits is a Heat album featuring Stowell, Lockett and drummer John Lewis. It's also what they're calling the show Friday at the Jambalaya, where saxophonist Frances Vanek joins the trio. Might be a good time to learn even more about Tommy.