Catching everyone 'off guard,' PG&E looks to return project to full operational status 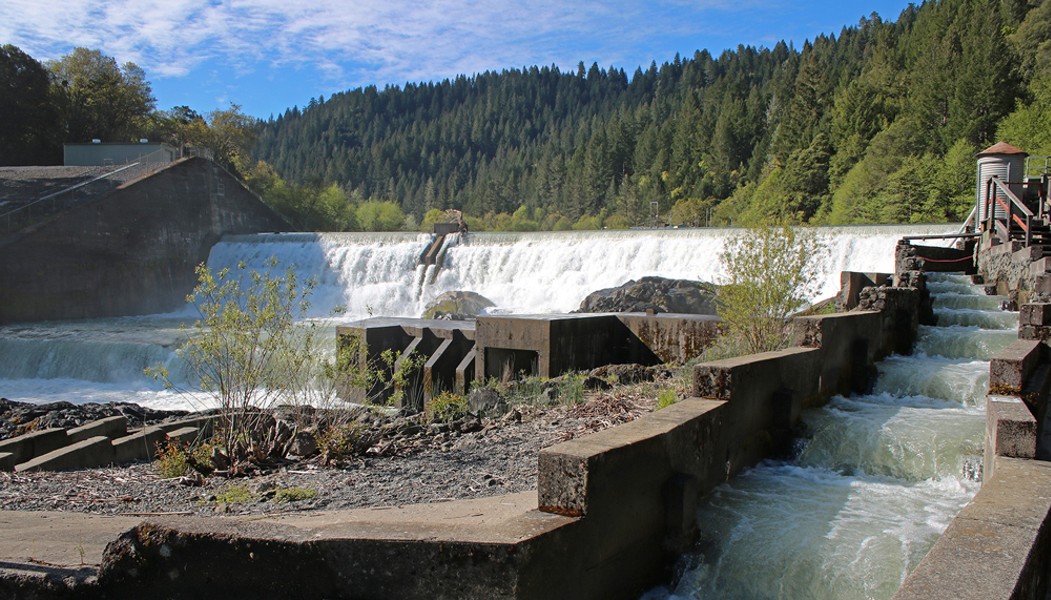 Historic Engineering Record Built in 1900, the Cape Horn Dam is the oldest combined concrete gravity and earth filled dam in the state.

The future of the Potter Valley Project that diverts water from the Eel River to the Russian River is more uncertain than ever, with a regional coalition declaring it will not file for the license application and PG&E unexpectedly taking steps to continue operating the project under an annual license until the next development.

PG&E, which owns and operates the hydro-electricity project that includes two dams, announced in 2019 that it would not renew its license and was no longer trying to sell it. The Two-Basin Solution coalition, which agreed to prioritize fish passage and water supply, was the only entity to express an interest in taking over the license. But on Jan. 31, the group sent a letter to the Federal Energy Regulatory Commission (FERC) explaining the regional partnership of nonprofits and local government bodies will not file an application by the deadline set in mid-April, when the current license expires.

The decision had been widely anticipated, since the coalition — known collectively as the Notice of Intent (NOI) parties and consisting of Humboldt County, California Trout, the Round Valley Indian Tribes, the Mendocino County Inland Water and Power Commission, and Sonoma County Water Agency — has been unable to gather the estimated $12 million to $18 million needed to conduct the studies required by various regulatory agencies ("A Moment of Opportunity," Sept. 30).

The project has been what PG&E spokesman Paul Moreno calls "non-economic" for years, which is why the company had looked to bow out of the ongoing operational and maintenance costs. The water diverted from the Eel River is far more valuable to Russian River water users than the power generated by the project is to PG&E. But that flow, which can get as high as 270 cubic feet per second, has been severely curtailed since a transformer in the Potter Valley powerhouse went offline in July. PG&E estimated that repairing the transformer bank would cost between $5 million and $10 million, and could take up to two years.

In a surprising turn of events on Feb. 2, PG&E's director of strategic agreements told the NOI parties that PG&E had "concluded it is beneficial to PG&E's electric generation customers to proceed with the work necessary to return the powerhouse to full operational status." Moreno said in an interview that the company expects to be able to recoup the costs of the repair, which are still unknown, within five years, during which the company plans to continue operating under annual licenses from FERC. PG&E is not currently under orders to decommission the project, which Moreno described as "kind of a relicensing process in reverse."

That process has not historically been straightforward. Janet Pauli, of the Potter Valley Irrigation District and chair of the Mendocino County Inland Water and Power Commission, said that even if the relicensing process "had gone perfectly, there probably would have been things that needed to be changed. It's really unlikely the license would have been renewed in time." During the previous relicensing process, which lasted from 1972 to 2006, PG&E operated under annual licenses for 11 years.

"And that's when everything was really simple," Pauli added.

North Coast Congressmember Jared Huffman, who formed an ad hoc committee devoted to developing recommendations for the future of the Potter Valley Project, said while PG&E's decision to repair the transformer caught him "off guard," he doesn't think it will have any bearing on what he sees as an inevitable decommissioning process. With no one else taking over the license, PG&E remains responsible for the costs associated with the project. Huffman said he suspects the company "did a cold-blooded business calculation" by assuming it would be cheaper to continue making power during "the X number of years it takes to decommission." He added that while he thinks the decision "is, in the short-term, a sigh of relief for Russian River water interests," even a fully functioning project is not a long-term solution to water woes — and the diversion will be minimal in the two years or so it takes to custom-engineer the broken equipment and install it.

But Alicia Hamann, executive director of Friends of the Eel River, is alert to the possibility that PG&E may seek to recover the costs of replacing the infrastructure "on the backs of ratepayers." She added that the nonprofit Friends of the Eel is urging FERC to fast-track the decommissioning process, saying, "It's our last and best chance to protect wild salmon and steelhead in California. And removing the two dams at the headwaters is really the most important move we can make to protect the fisheries."

In a Feb. 1 letter to FERC, Friends of the Eel River Conservation Director Scott Greacen wrote, "Water supply is not an issue over which FERC has jurisdiction," but, if the dams are deemed seismically unsound, "an unsafe Potter Valley Project is an unreliable Russian River water supply." He went on to detail the peril of the Eel River fisheries and lament the lack of publicly available information about the dams' safety.

Darren Mireau, the North Coast director of California Trout, says PG&E "has been the black box of this whole thing. ... They acknowledge what we're trying to do, but they haven't shed much light, if any, on what their plans are. They haven't been willing to provide funding for studies to try to help the regional partners determine what paths are the best way forward, so we really need to crack open that dialogue with PG&E and hear what they're going to say. And I think they're probably not going to do it until they're made to say things by FERC."

Pondering the year-to-year nature of the future licenses, Mireau added that "maybe conditions can be attached to annual licenses."

But Huffman thinks trying to leverage expensive mitigation requirements is "a wild card."

"Even if they wanted to get out earlier, they can't," he said. "FERC will not let them out of this quickly or cheaply."

The Two-Basin solution partnership may have gotten an answer to the question of what it would take to continue diverting water without the project and its dams. In November, the California Department of Fish and Wildlife funded a study on the group's behalf exploring three options for continuing diversions under scenarios with various parts of the project dismantled. Mireau, of California Trout, favors a water-pumping option that includes the removal of Cape Horn Dam, which forms the Van Arsdale Reservoir in Potter Valley, in addition to Scott Dam, which sits about 12 miles upriver. Unlike Scott Dam, which forms Lake Pillsbury in Lake County, Cape Horn has a fish ladder and a CDFW-operated fish monitoring station. Scott Dam has long been on California Trout's list of dams that are "ripe for removal."

Mireau's favored scenario is estimated to cost around $200,000 a year to run.

"Any water management, any water diversion at that location is going to have some operations and maintenance costs — that's unavoidable," he said, shortly after the study was released. "The advantage of the full removal of Cape Horn Dam with that pumped diversion approach is you get all of the obstruction out of the river that might impair fish passage. ... It does shift the cost, I think, to the water users, instead of the fish side, where it appropriately needs to be. In other words, we're committed to that water supply reliability but I think the water users have the obligation to pay for it. And if pumping is the best way to do that for fish passage and fishery recovery in the Eel River, I think that's the best approach."

Pauli, who chairs the Mendocino County Inland Water and Power Commission, said the commission is working with consultant Brian Godbey and Associates to poll people who are dependent on project's water about their willingness to pay for it and research what it would take to assess a parcel tax or get a special tax on a ballot. Thus far, she noted, all the legal expenses for pursuing the relicensing have been borne by the five agencies that are members of the commission.

"Protecting the diversion has to be our primary concern," she said.

Hamann, meanwhile, finds it entirely fitting that water users should pay for the commodity, if it can be diverted in an ecologically appropriate way. The habitat trapped behind Scott Dam is some of the best in the world, she asserts, including cold water refugia that exclude invasive pike minnow.

Recently, community members got an insight into how much scientific research PG&E biologists conduct in the Eel River watershed during a controversy over an attempt to cut down a tree containing a bald eagle's nest. Audubon societies around the county know how long that nest has been there, where the alternate nest is and when it was last used — all because of environmental records the company has kept as part of its licensing agreement for the Potter Valley Project. Asked if anything will be lost to science if PG&E departs, Hamann said the controversy about the project has engendered plenty of ecological research, including the discovery of summer steelhead.

"Indirectly, PG&E causing a problem resulted in some really cool knowledge," she said.

Sarah Reith is a radio and print reporter working in Mendocino and Humboldt counties. She covers the environment, local government, and the arts.