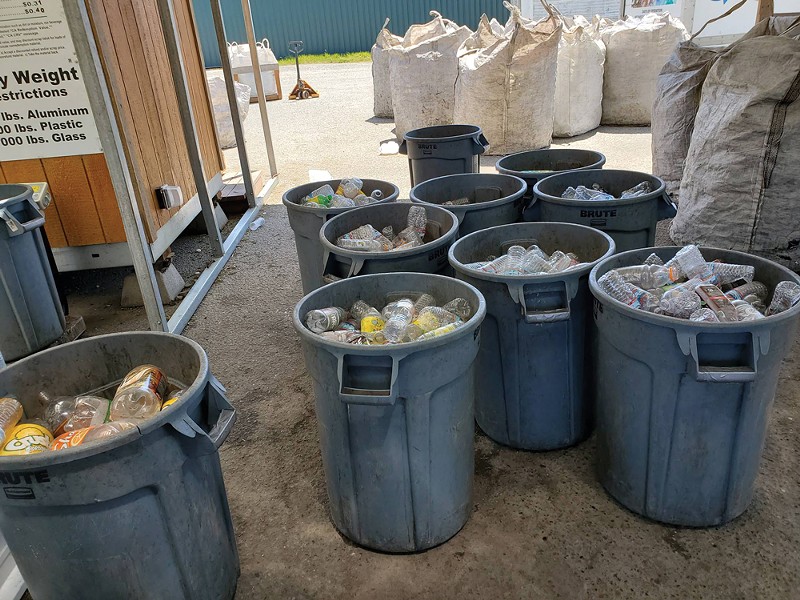 Get ready to finally have a chance to redeem your California Refund Value deposits, Humboldt. Hambro Recycling of Crescent City is opening a CRV buyback center in Arcata in the next few months.

"We've been looking at [opening a CRV buyback center] for a while. You know, there wasn't really any movement in Humboldt. We've been having a lot of Humboldt people up here visiting us at our recycling center. We wanted to make it easier for them to recycle," says Randy Scott, vice president and general manager of Hambro Recycling. "It isn't a decision we made lightly. We just started crunching the numbers and put it together and thought we could do it. You know, giving all the folks in Humboldt the opportunity to stay home and recycle."

Humboldt County has been without a CRV buyback recycling center for almost a year after its last CRV recycling center at the Humboldt Waste Management's Eureka Recycling Center became so overwhelmed with hundreds of people who wanted their deposits back it created a hazard off Broadway. The center ultimately closed its CRV redemption services because it was operating at a loss due to the high costs of transporting material to market, handling material and the low value of commodities. (The Eureka Recycling Center is still open and accepting recyclable materials, like mixed plastics, corrugated cardboard, mixed glass, clean scrap metal, appliances and e-waste.)

Without a designated CRV buyback center, by law it was up to grocery stores and retailers to refund the 5 to 10 cent deposits back to customers, however, most Humboldt County retailers didn't, choosing instead to pay fines, due to issues with transportation costs, handing the materials and storage, while other grocery stores limited the number of cans and bottles and days they accepted materials.

Since then, some Humboldt County residents with loads of recyclables have traveled two hours away to Hambro's Recycling in Crescent City to get their deposits back. Scott says employees have even gotten to know the Humboldt regulars who bring their CRV recyclables to their facility.

Scott says that they were able to "crunch the numbers" and found that they could afford to open a new CRV buyback center due in part to the fact that Hambro Recycling owns its own fleet of trucks to transport materials to Anderson, California.

The highest cost of running a CRV buyback center in rural areas is transportation — buying or hiring a truck that can transport materials to market hundreds of miles away.

"We have our own trucks, so we control the transportation," Scott says. "The processor in Anderson will take mix loads, so once we have a full load of plastics, aluminum and glass, we can ship it. So there's no wait to build a load of each different material. That has also helped us at the Crescent City facility and it will at the Arcata one."

The opening of the Arcata certified CRV buyback center on South G Street near Redwood Curtain Brewing Co. will create a relief for grocers and retailers in a convenience zone (a 3-mile radius in which the epicenter is a grocery store). If there is a CRV buyback center within the convenience zone, grocers and retailers in that specific area are exempt from offering in-store CRV buyback services as the zone is considered "served."

Scott hopes to open the Arcata center within 90 days. The company is just waiting to receive the required permits from the city and the California Coastal Commission, hire the right crew and, of course, obtain their certification from CalRecycle.

"I'm feeling great and excited and looking forward to helping the people from Humboldt," Scott says. "We've developed a method of inspecting and weighing and processing, and the staff I have up here is excellent and we run a very efficient center. And we expect to do that the same way in Humboldt. We know there will be a tsunami, so to speak, and we'll be prepared for that."

Scott has heard the stories of when the Eureka Recycling Center was overwhelmed and says he plans on fully staffing the center with an all-hands-on-deck approach and estimates the property can hold 30 cars off the road, which will help keep the line moving.

"We know it's going to be a big rush, a high demand. We're confident that we could handle it," he says.

Iridian Casarez (she/her) is a Journal staff writer. Reach her at 442-1400, extension 317, or iridian@northcoastjournal.com. Follow her on Twitter @iridiancasarez.