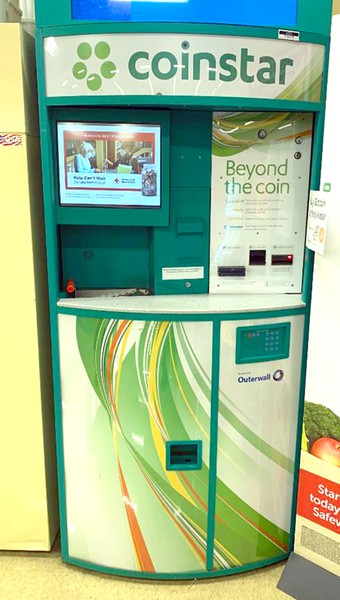 Photo by Barry Evans Got Bitcoin? This "Bitcoin ATM," in Safeway on Harris Street in Eureka, is one of more than 4,400 Coinstar-Coinme machines in 33 states.

"I think that the internet is going to be one of the major forces for reducing the role of government. The one thing that's missing, but that will soon be developed, is reliable e-cash, a method whereby on the internet, you can transfer funds from A to B without A knowing B or B knowing A."

So claimed Milton Friedman, Nobel laureate economist, in a 1999 interview. It would take another 10 years for his prophecy to come true. On Jan. 3, 2009, a computer coder going by the name of Satoshi Nakamoto gave birth to Bitcoin, having published, a year earlier, a nine-page white paper explaining how a decentralized peer-to-peer monetary system could work. In some 30,000 lines of code, he (or she, or they) created what's been touted as "the greatest revolution in money since Isaac Newton's 1717 gold standard." The long-term result of Nakamoto's genius will, I predict, be a downgrading of our brick-and-mortar financial institutions, in the same way that the internet and email have put the postal service on life support. More importantly, Bitcoin will democratize the transfer of money in the same way the internet has democratized the exchange of information.

Last week, I discussed what Bitcoin and its many cryptocurrency imitators actually are and how they work. This week, I'll try to show how Bitcoin can simplify your life by allowing you to send and receive money directly, with no bank or credit card between you and the other party. With your cell phone, you can now transfer money to anyone else — including a complete stranger — around town or around the world. The transaction will be secure, instantaneous, virtually free, uncontrolled and unimpeded by third parties. And — be warned! — non-reversible. Once the money's gone, it's gone. What I won't be discussing here (or anywhere) is Bitcoin as an investment, since the price fluctuates wildly — up to nearly $20,000, down to a little over $3,000 then up to $60,000 — in three short years. You're on your own with that.

The first step is to create a "wallet" where you'll store your Bitcoins — remember, there are no actual coins, it's all virtual money. Your wallet is a program to store, send and receive Bitcoins. Just as you use Gmail or Outlook to manage your emails, your wallet manages your Bitcoins by interfacing with the blockchain, the single ledger that has kept track of all transactions since 2009. The most convenient type of wallet is an SPV (for Simple Payment Verification) such as BRD or Bread, which lives on an app on your phone connected to a cloud server. What an SPV might lack in bulletproof security, it makes up for in convenience.

For all its advantages, the downside of Bitcoin is the energy used by miners in their efforts to discover the winning nonce, the number that pays out, currently 6.25 Bitcoins every 10 minutes on average. According to a formula devised by Cambridge University's Centre for Alternative Energy, Bitcoin mining consumes some 140 terawatt hours of electricity per year, on a par with a small country like Sri Lanka or Jordan — or about 0.6 percent of total worldwide energy consumption. Much of this (between 39 percent and 78 percent, depending who you believe) comes from renewable sources such as hydro (especially from China's huge dams) or from stranded gas, natural gas that otherwise would be uselessly flared off. North America's largest Bitcoin mining operation, Bitfarms, uses only hydro power, while China and Norway offer subsidies to miners to use their local hydroelectric sources.

More to the point, proponents of Bitcoin claim that cryptocurrency is far less damaging (90 percent less, according to a study by ARK Management) to the environment than the traditional fiat banking system with its vast infrastructure of offices, commuting workers and fleets of armored trucks. Of course, the Bitcoin world is far smaller than the traditional system but it's early days. Personally, I'm optimistic cryptocurrency will supersede much of today's banking system, ultimately democratizing money while benefiting the environment.

Barry Evans (he/him, barryevans9@yahoo.com) thinks gold mining — more than 90 percent of which is stored or used for jewelry — is a far greater environmental threat than Bitcoin mining.