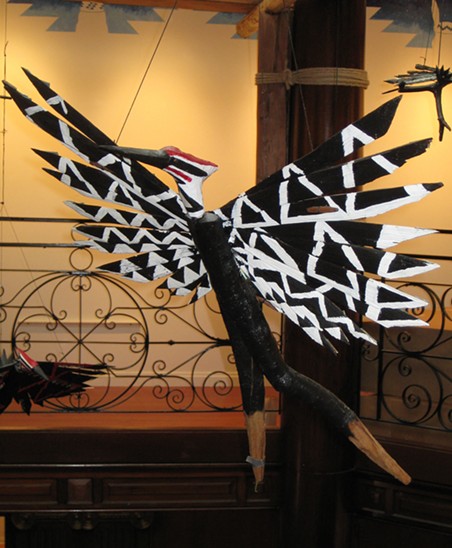 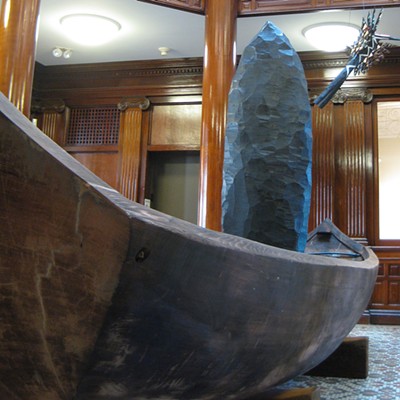 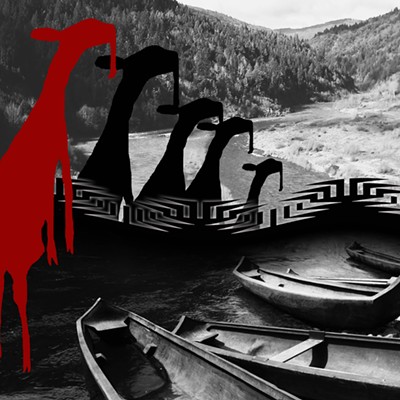 It's happened again. The Morris Graves Museum of Art has been transformed. In December, Peter Santino took over the space, filling all of the upstairs galleries with his conceptual installation, "The Exhibition at the End of Time, at the End of the World."  Now "River as Home" has poured in, filing the museum from top to bottom. The invitational exhibition, sponsored by the Humboldt Area Foundation's Native Cultures Fund, marks the first time Native American art will encompass the entire museum.

"River as Home" is the realization of dual visions of Chag Lowry, program manager for the Native Cultures Fund. Lowry wanted a high profile event that would showcase all that local Native artists have to offer, and he saw the river as a unifying image.

The process began about a year ago. One of his first moves was to tap well-known local artist Bob Benson as curator. The hope was that, in addition to increasing the visibility of art from local Indigenous people  -- Wiyot, Yurok, Karuk, Hupa, Tsnungwe, Tolowa and others -- the exhibition would help raise awareness about the issues of water rights and water quality.

The final group of artists, more than 30 participants, started with a core group of six selected by Lowry: Brian Tripp, George Blake, Deborah McConnell, Karen Noble, Lyn Risling and Benson. The six worked up an invite list with Lowry. The plan was to "do the entire museum with the best work that we can get and the most diverse work we can get -- young, old, traditional, contemporary, the works," said Benson. As a result, the exhibition features emerging artists alongside older, more established artists -- a situation that has the potential of promoting an important dialog within the Native artist community.

As the project developed, Lowry took on the role of exhibition director and Risling took on added responsibilities as a co-curator. The group also brought in recent Humboldt State graduate Brittany Britton as an assistant curator. Benson emphasized the help of many others in getting the show ready: "It really is a community thing."

Once all the artists were selected, the curators were faced with the daunting task of figuring out how to incorporate all that diverse work into the museum space -- from small and large canvases to baskets, regalia and a 700-pound canoe.

There have been local exhibitions of Native art in the past, but nothing of this scale and scope. Seeing this range of work all in one place is impressive. "The show does not reflect similar experiences, it reflects diverse experiences," said Benson, noting that the diversity is what makes the body of work so unpredictable and exciting. Whether you're looking at tradional baskets or more modern, abstract paintings, you're likely to be surprised.

Another impressive aspect is how the organizers managed to bring the disparate elements together in a cohesive, thematically interesting and informative way. Benson explained that the structure and organization mirror a ceremonial space. Where traditionally there would be a hearth in the center, "River as Home" features a central installation created by three of the show's primary artists with George Blake's canoe, a six-foot tall, carved obsidian blade by Benson, and 13 suspended woodpecker sculptures by Brian Tripp. The installation ascends from floor to ceiling in the museum's central rotunda.

"On this centerline, the whole image of the world we're creating turns," said Benson. When people enter the museum, what they will be seeing is, as Benson envisions it, "the cultural transformation of the building."

"River as Home" runs through March 23 at the Morris Graves Museum of Art (636 F Street in Eureka). The museum is open Wednesday through Sunday noon-5 p.m.