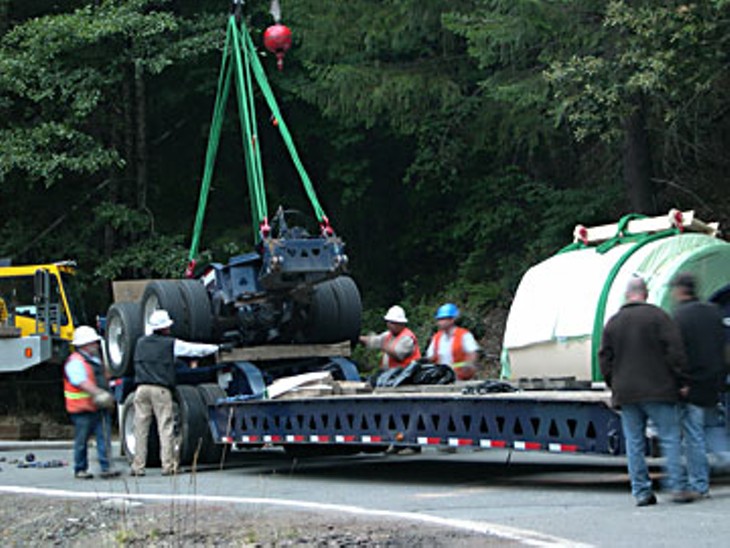 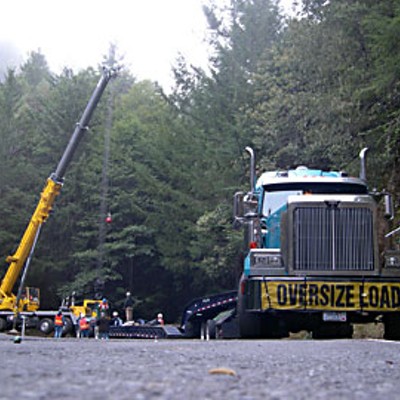 Just before noon on the Friday before Labor Day weekend, a truck carrying an empty 90,000-pound nuclear waste cask to the Humboldt Bay Power Plant came to a slow halt on a sharp curve on State Route 36.

It happened near Buck Mountain on a shoulderless, narrow, steep section of road flanked by a rising wall of rock on one side and a 75-foot chasm on the other. The big rig -- 108 feet and four inches long -- blocked the entire roadway, with one axle suspended in air above the chasm. And it wasn't until more than 24 hours later, after a tricky operation involving more big rigs and a crane, that the blockage was cleared.

The stuck truck disrupted the plans of some travelers headed for Ruth Lake to get a jump on the weekend. It also provoked ready suspicion in some of the people who live along that remote, twisty highway, for whom all it took was even a whiff of a report that this truck had something to do with something nuclear for them to want to simultaneously rush to the scene in morbid curiosity and flee the region in fear.

Steve Mendonca, who lives on Route 36, called the Journal to express his worries. "I don't want this stuff anywhere near me," he said.

It didn't help that even far-distant observers were pushing the panic button.

"Has anybody checked for radioactivity in the area of the accident. Not that anybody would try to cover anything up," wrote "BDV of Chicago" in the online comments to a Times-Standard story about the incident.

Another commenter wondered the million-dollar wonder: What was a truck -- a nuke truck -- more than 40 feet over the state's 65-foot restriction for Route 36 (and 299, and part of 101) doing on that crazy stretch of roadway? "Trying to sneak in the back door?" wrote "argumentum."

Someone else soothed that the cask was empty, and was headed to Humboldt Bay where it would stay put.

That's true, says spokesperson Jana Morris with Pacific Gas & Electric, which owns Humboldt Bay Power Plant. Once at Humboldt Bay, the cask will be filled with spent nuclear fuel assemblies, which have resided in pools at the site for decades; the nuclear power plant was shut down in 1976. Then it will be sealed and buried along with four other casks in an underground storage tank on site at the plant.

"We're storing it until the Department of Energy can take it to a [permanent burial] site," Morris said.

So far, the only site the DOE has seriously considered is at Yucca Mountain in Nevada -- and the horizon for that facility's opening date keeps receding.

But even with an empty cask -- why 36? And if Yucca Mountain does ever open, will casks carrying radioactive waste be trundled up and down that highway's treacherous curves en route to the repository?

Julie East, a spokesperson for Caltrans, said last week that Midwest Specialized Transportation, the company hired to transport the cask from Pennsylvania to Humboldt Bay, electronically submitted a permit to haul an "extra-legal load" into Humboldt County. She said Caltrans regularly grants permits for over-long loads.

"And the driver selected the route," East said.

One can imagine the poor guy -- identified by the California Highway Patrol as Kenneth Soest of Minnesota -- studying the map, calculating angles versus squiggles, and coming up with an obvious speedy shot over I-80 from Nevada to I-5, then up to Red Bluff and the closest jog west to Humboldt County and the bay -- State Route 36. On the map, it doesn't really look much worse than the other possibilities.

But, said East, the driver falsified some information. He reported the wrong spacing between the axles on the rig's trailer -- something that could affect the truck's turning radius, East said. "And, the load description on the permit was given as a milling machine, when the actual load was an empty, new, nuclear cask," she said.

Sgt. David Mickelson, supervisor of the CHP's northern division commercial unit, said the truck's driver also had not secured the load properly. "He did not have the required chains for the weight of the load," said Mickelson by phone on Tuesday. The load didn't come off -- but had the truck tipped over, it might have, he said.

But even if the truck axles and the load had been in compliance, the truck still probably wouldn't have made it down 36, said CHP Officer Bill Boyes on Tuesday. Boyes was one of several officers to respond to the incident -- in fact, his presence probably added to the fear onlookers felt, because he's a Hazmat officer. "Initially we didn't know what was on the vehicle," Boyes said.

He said for a truck that length to get around 36's tight curves, it would have needed steerable rear wheels -- which it did not have -- and a Route 36-savvy driver.

And in fact that's what it took to extricate Soest, his truck and the 8-foot diameter 90,000-pound cask from their predicament. First, North Coast Fabricators, an Arcata company, trucked a crane out to the site to lift the cask off Soest's truck and move both to the side of the road. Then NCF called Cheri and Jon Pittman, who own Pittman Trucking in McKinleyville, who drove one of their trucks with articulating rear wheels out there. The crane loaded the cask onto it, and the Pittmans -- who'd first turned their rig around at Dinsmore so they'd be headed in the right direction -- drove the cask to its home at Humboldt Bay Power Plant. Soest's trailer was plucked apart and stacked upon itself, and Soest was directed to a wide spot to "get some sleep," as Boyes put it.

"I felt sorry for him [the driver]," said Cheri Pittman last week by phone.

The driver of the pilot car hired to accompany Soest from Red Bluff to the coast, Stan Condit, reacted less mildly.

"Whoever at Caltrans permitted that route should be shot," Condit said by cell phone last week while en route to another gig, piloting a mobile home through Nevada. Condit added that Soest had told him of other travails as he wended his way West: He'd been robbed. He'd lost a driveline. He was rear-ended on I-80. As for the Route 36 incident, said Condit, Soest "was a very good driver."

"He swung that turn as widely as he could turn it, and he had good common sense and he just stopped," said Condit. "He did everything right."

Spokesperson East said Caltrans is now reviewing its permitting process for that highway.

"Route 36 is a Brown route," she said. "After this incident, we're looking at reclassifying 36 to a Red route. That classification gives us a way to scrutinize the load better and requires a CHP escort."

With the delivery of last week's cask, the new PG&E facility now has four of its five casks on site. The other three came up highway 101, said PG&E spokesperson Morris. As for the last one, a very strict order has gone out that whoever drives the thing here cannot take Route 36, she added.

If there is an overarching lesson to all of this, perhaps it comes from long-time activist Michael Welch, of Redwood Alliance, which pushed for the Humboldt Bay Nuclear Power Plant's closure once its susceptibility to earthquakes was revealed.

"I think it proves beyond a reasonable doubt that the hauling of radioactive material is the wrong thing to do," Welch said by phone last week. "It's unsafe. Thank God it wasn't full and didn't go over an embankment or something."