A kayaker's death has raised safety questions about low-water bridges 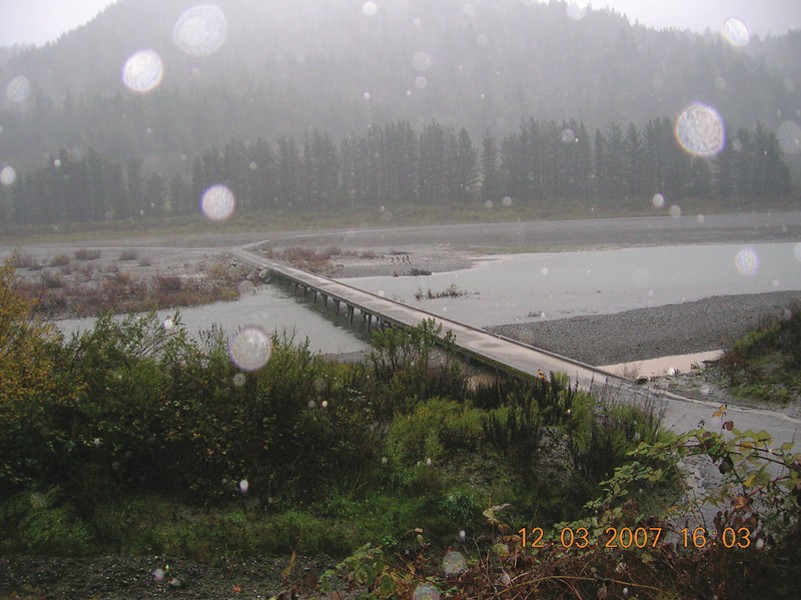 PHOTO BY BILL WHITE, SOUTHERN HUMBOLDT COUNTY ROADS AND BOAT CREW SUPERVISOR. The rain is coming down but the river is still far below the McCann Road bridge.

PHOTO BY BILL WHITE, SOUTHERN HUMBOLDT COUNTY ROADS AND BOAT CREW SUPERVISOR. The next day, the river has overtopped the bridge and it's ferry time.

Last month, 24-year-old Samantha Dweck was boating on the Eel River with a group from San Francisco when a strong current under the McCann Bridge sucked her kayak into a bridge piling. The kayak capsized, and the current pinned it underwater against the support. Dweck's companion in the kayak freed himself, but she was unable to and drowned.

Two days later, local fish biologist Joshua Strange wrote in dismay to the county's director of public works, Tom Mattson, saying Dweck's drowning was unnecessary. Strange said he'd boated the main stem of the Eel in 2014 and found the bridge at McCann and another at Holmes — both owned by the county — to be "the worst man-made hazards to navigation" he'd seen in his 20 years of whitewater boating. He called the McCann Bridge, in particular, "a death trap" and both bridges "clear-cut violations of the Public Trust Doctrine of California ... which protects the public's right to boat in a variety of craft on navigable waterways free of man-made obstructions and hazards." They shouldn't even be there, in this day and age, he said.

Both bridges are what are called low-water crossings — usable when the water is low, and unusable when high water flows over them. Residents of Larabee, on the east side of the river, use the Holmes-Larabee Bridge to get to Holmes and U.S. Highway 101 on the west side during the summer when the road into the community is closed for logging use. The nine McCann residents (there are more in the summer), also on the east side of the river, have no other access road and use the McCann Bridge whenever the river is low enough to connect to Dyerville Loop Road and, eventually, the highway. When the river flows over the McCann Bridge, residents use the county-run ferry. (See "Other Side of the River," March 24, 2011). Some days, when the river is too rough, the ferry doesn't cross and the residents stay put.

Strange wrote that while he sympathized with the residents' need for access, he thought the bridges should be removed first and immediately, and then alternative crossings figured out.

The Holmes-Larabee low-water crossing is, in fact, being replaced. The 78-year-old structure was closed in 2013 because it had deteriorated, and the county has since provided a temporary bridge. Mattson said the county has secured the assurance of $18 million in federal highway funds to build a permanent bridge that will be high enough to be operable year-round. He said that the defunct low-water bridge, which is so low it cannot be boated under, "most likely" would be removed, but that would "depend on studies that have to be made."

It would cost about the same to replace the McCann Bridge, Mattson said, but the county has no plans to do so. That's because the bridge doesn't qualify for replacement funding, he said. To qualify, a bridge has to have a "sufficiency rating" below 50, and the McCann's rating is 60. In answer to Strange's claim that the McCann Bridge violates California's Public Trust Doctrine, Mattson said that the bridge "is fully permitted in accordance with local, state and federal requirements."

The crossing at McCann has seen numerous configurations: boats, a gondola, bridges — even a couple of high-water bridges further upstream where the canyon is narrower. The present low-water bridge, built in 1964, begins on the west side and ends abruptly about two-thirds of the way across the riverbed. It was 60 percent finished when the 1964 flood swept through and rearranged things, said southern Humboldt County roads superintendent Bill White in an interview with the Journal several years ago. (Attempts to reach him for this story were unsuccessful.) Since 1964, when the water's low enough, the county just pushes gravel into a ramp each year at the dangling end. There've been battles, as well, over what sort of crossing to have. At one point, the county proposed dropping the ferry service and extending the bridge at least a couple hundred feet. Some residents sued, wanting to keep the ferry. Other residents wanted the bridge extended. And some critics thought that even an extended bridge might still get overtopped during high water. (The county did spruce up some of the ferry works a few years ago, adding gravel to one of the launch sites and buying a new boat — but the launch site isn't wheelchair accessible, said McCann resident Tracy Whitlow, and the county still hasn't built a shelter for passengers to wait in during inclement weather.)

The best option would be a high-water bridge, White said, adding, "That's No. 1 on my list of things to do before I retire: to get a bridge built and get us out of the boat business. It's dangerous. You can't take the river too lightly, even in calm water situations."

But at least the ferry runs downstream of the bridge. And residents are aware of the dangers; visitors, not always. Whitlow said her husband, Rex, has rescued a few people whose boats have gotten hung up on the bridge pilings.

"We had a church group go through three years ago, and they wrapped a kayak around that bridge," she said. "It's really treacherous. I wouldn't take a boat under it — although, there's a lot fishermen who do go under the bridge. But they're experienced."

She said the kayaking groups who return each year, traveling from upstream, usually exit the river above the bridge and portage around it. The group that Dweck was with decided to float under the bridge. When the Whitlows heard on the scanner there was trouble at the bridge, Rex went to check it out and spent hours at the scene trying to help, although Dweck had drowned before he got there.

Strange, the biologist and whitewater veteran, said boaters unfamiliar with the river there might not realize the hazard until it's too late. The river bends just before the bridge comes into sight, he said, which gives a boater little time to assess the situation.

"It's swift, it's on a short turn, and you have to make a decision quickly," he said. "And then it looks like you can just shoot through the gaps between the pilings. But the problem is they're set at a 45-degree angle to the current, so if you attempt to shoot the gap the direction of the current is going to throw you up on the pilings."

At least the Holmes-Larabee Bridge, he said, is on a straight stretch of river so a boater has time to figure out that the bridge is too low to go under and must be traversed around. "Whereas the McCann bridge is a death trap. It lures you into thinking you can go through it."

David Steindorf, with American Whitewater, a national river conservation organization, agrees with Strange that the bridge is dangerous. "Our understanding is there's no signage, no warnings," he said. "I have been discussing it with our legal counsel on staff, and reaching out to other people. We plan on writing a letter to the county saying it should do something about this."

Mattson, meanwhile, said the county "is investigating to see if there are improvements that can be made" to the McCann Bridge to make it less hazardous.