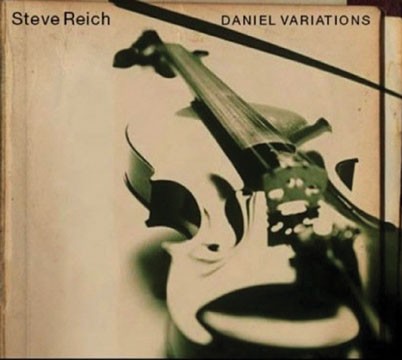 Steve Reich's work stands today as one of the pillars of modern music. Along with his contemporaries Philip Glass and Terry Riley, his exploration of the potential emotional weight of the cyclical repetition of music phrases in the 1960s and '70s was not only one of the last great movements in Western art music, but also the conceptual blueprint for modern day loop-based music genres like hip hop, techno and much of the experimental underground, not to mention most modern classical music that followed. Unlike his other minimalist brethren (with the exception of La Monte Young) Reich has remained relevant through the years, with innovations that still revolve around his signature use of melodic fragments with interlocking rhythmic repetition.

Reich has not shied away from dealing with overtly political topics in his music, and his new release, Daniel Variations, is no exception. Initially premiered in 2006 as part of Reich's 70th birthday celebration, Variations was composed in remembrance of American journalist Daniel Pearl, who was famously kidnapped and executed in 2002 by Pakistani militants while on assignment in the Middle East. With female soprano vocalists, Reich takes Pearl's last recorded words, "My name is Daniel Pearl. I am a Jewish American from Encino, California," (which appeared on a videotape filmed by his captors, along with his subsequent beheading), and casts them against his trademark marimba/vibraphone pulse with violin lines weaving in and out and heavy, chiming piano lines thundering beneath. Through the different movements, Reich parallels Pearl's final words with experts from the biblical Book of Daniel, drawing a connection between the post-911 world of "terror" and the book's apocalyptic predictions. Appropriately enough, Variations is Reich's darkest piece to date. Cast in a grim minor key with a somber tone overall that is highly unusual for Reich, it's darkness surpasses even his 1988 work Different Trains with its juxtaposition of Reich's childhood memories of train travels with audio fragments from interviews with Holocaust survivors. While his pieces usually have a transfixing quality that evokes the busy and complex nature of human life, Variations evokes quite the opposite, with intense maximalism in place of his omnipresent slow shifting minimalism, depicting a world coming to terms with the brutal realities of war, death and terror.

It's a particularly heavy topic to tackle, and what Reich is attempting to capture may be beyond the scope of a piece of music, at least in his style. Unfortunately it's tough to look past the overwrought nature of the piece, and its lofty emotional goals make it hard to connect with on a base level. Much like Glass's later pieces, an inescapable air of pretension clouds the work, and while it is largely devoid of the thick layer of schmaltz that cakes Glass' recent film scores, Reich still aims a bit too high and ends up sounding more bloated and operatic than dignified.

While Reich's best work seems to exist outside of the modern classical lineage, in territory less daunting and more universal, the overall feel of Variations relies heavily on the same traditions that his work once eclipsed. It seems that Reich has fallen into the same stale pretension of the concert hall that the post-Cage-ian "new music" linage that his minimalism is rooted in sought to break down. In Reich's defense, the unavoidably serious nature of the subject matter might warrant this. And it's not as if Reich chose the topic: Pearl's father approached Reich to commission the piece as an artistic memorial for his son, and with that in mind it seems that Reich may have done his best to tackle the subject. The CD also includes the less noteworthy "Variations for Vibes, Pianos & Strings," a work from 2005, which comes off as a stale arrangement of Reich's musical trademarks and fails to construct anything new with them, almost like a Reich paint-by-numbers. Though the effort is still there, it seems as if Reich's work may have finally lost the spark that he kept alive for so long.