Cam and The Christmas Chronicles 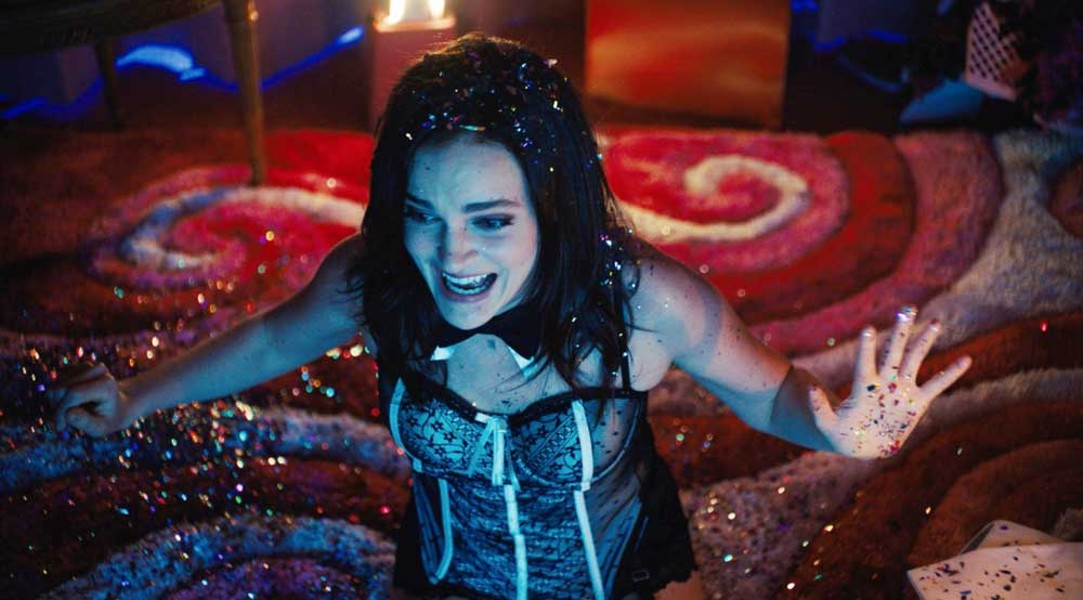 Cam Glitter, like compromising photos on the internet, is forever.

CAM. As excited and outspoken as I've been in recent years about contemporary horror movies, the genre's groundswell of creativity and renewed excitement at the theatrical experience, this weekend gave me pause. Because as much as I genuinely believe that the horror genre, at least as defined by the best contemporary examples, may well represent our best chance at reversing — or at least slowing — the centralization and tent-poling of mainstream American cinema, I'd rather not go watch yet another demonic possession movie. And seeing as The Possession of Hannah Grace was just about the only one on offer at the multiplex — or any plex, locally — I didn't go. (I'm omitting, not forgetting Pokémon the Movie: The Power of Us. I'll get to that in a minute.). Someone let me know if I've erred.

Fortunately, Netflix continues to rise among the ranks of movie production and distribution giants, despite its constant grumbling about unfairness and ineligibility and betrayal of the medium. (Listen, I watched most of the classics on VHS or poor-quality early DVD transfer, so the argument that "if it ain't on the Big Screen, it ain't" doesn't really fly with me. Do I prefer the theatrical experience? Sure, most of the time. But I also want access to movies I won't be able to see that way.) Anyway, Netflix: In addition to quietly deepening its back catalog, the company has gradually become the primary creator of mid-level cinematic exploration, making quirky movies of the sort that fostered my crazy, stupid love of the form back when it was peaking.

For Cam, Netflix collaborated with Blumhouse Productions, a moderately sized outfit that emerged within the last decade or so as the tip of the spear that is the contemporary horror movement. By emphasizing pragmatic location choices, shooting schedules and creative use of resources, it has shepherded some distinct and important new voices to the marketplace. It has made a string of hits (there've been some misses but what're you gonna do?) and a very large pile of money. Blumhouse does things the old-school, indie way, in other words. And while Netflix is certainly not "indie" in the sense that some of us are used to, it seems to see the value in the method, with Cam as a prime, if imperfect, example.

Alice (Madeline Brewer) makes a comfortable living as a camgirl called Lola, teasing her followers for tips on a hosted website. As the movie opens, she breaks into the Top 50 for the first time. It's a momentous occasion but Alice is intent on making the Top 10. She's inventive and adheres to a few simple rules under which her success continues. She has a duplicitous rival and a borderline stalker smitten with her, and she hasn't told her mom (Melora Walters) what she does for work, but she can take the bad with the good. But then her doppelgänger appears, having locked Alice out of her user account and hijacked her stream. What follows, a descent into the depths of identity theft and co-opted self that also (maybe a little too tangentially) examines the nature of sex online and of female sexual identity as commodity, cannot be called perfect. Especially as it moves toward the climax, the plot begins to fray and would certainly have benefitted from some script doctoring. But Cam is a fun, original riff on the horror genre, using the form to explore some important, distinctly contemporary ideas with a heightened sense of style. TVMA. 94M. NETFLIX.

THE CHRISTMAS CHRONICLES. To circle back to Pokémon, I've all but stopped seeing kids' movies in the theater. Partly because nobody particularly cares what I think about them and families will go see them regardless. Partly because most of them, this one included, hold no interest for me. And because, as my loving wife is so apt to point out, I look like a creep sitting alone in a big dark room full of children. But there remain those rare examples of Movies For Young People that I still might very much enjoy. Here again, Netflix got my back.

It's no secret that I celebrate Christmas movies as much as (OK, more than) the holiday itself. And so it was truly exciting to discover that Netflix had only recently released this, its own contribution to the Christmas canon, with Kurt Russell as Santa Claus, no less!

Mourning the recent loss of their dad, 17-year-old Teddy (Judah Lewis) and his sister Kate (Darby Camp), 11, of Lowell, Massachusetts, struggle to muster the spirit of the season. Teddy, an improbably proficient car thief, follows the path of the sullen teen into delinquency. Kate, still a true believer, wants to bring him back around. Mom Claire (Kimberly Williams-Paisley), trying to hold it all together under obvious strain, gets called in to work a double shift on Christmas Eve, leaving orders for the kids to make nice. They manage but they also stow away on Santa's sleigh, forcing a crash landing in Chicago. And so they become enlisted to help him recover the sleigh and the eight tiny reindeer and all the presents and save Christmas.

To be honest, this is a little light for my taste and will likely not be added to my seasonal festival programming (this year I fit it between The Night Before and Scrooged). But it's sweet without being treacly and has a few rousing action sequences. And Kurt Russell. C'mon. TVPG. 104M NETFLIX.

THE CONFORMIST (1970). Bernardo Bertolucci's film about a fledgling fascist on a mission to assassinate his old teacher. R. 113M. MINIPLEX.

WALKABOUT (1971). A pair of stranded white children meet an Aboriginal boy on his solo journey through the Australian Outback. Directed by Nicolas Roeg. GP. 100M. MINIPLEX.

BOHEMIAN RHAPSODY. Rami Malek brings Freddie Mercury's larger-than-life persona to screen but the rest of the band appear only as foils. The conventional plotting and scrubbed story can't dampen the exhilaration of the live-show recreations. BROADWAY, FORTUNA, MILL CREEK.

BOY ERASED. Lucas Hedges outshines even the excellent Russell Crowe with a powerful performance in an emotionally raw drama about the tortures of "conversion therapy." R. 114M. BROADWAY.

CAN YOU EVER FORGIVE ME? This true-life tale of a floundering, alcoholic author (a brilliant Melissa McCarthy) who finds success in literary forgery has the tension of a thriller while avoiding the empty mimicry of other biopics. R. 106M. BROADWAY.

CREED 2. The sequel takes on the second-generation Creed-Drago grudge match with emotional authenticity and bombast that's heartrending and thrilling. Starring Michael B. Jordan, as all movies should. PG13. 130M. BROADWAY, FORTUNA, MILL CREEK.

DR. SEUSS' THE GRINCH. Benedict Cumberbatch voices the green menace (which is going to give me all kinds of issues) in this latest animated trip to Whoville. PG. 90M. BROADWAY, FORTUNA, MILL CREEK, MINOR.

FANTASTIC BEASTS: THE CRIMES OF GRINDELWALD. The Potter-verse spins on in this sequel to the prequel starring Eddie Redmayne and a bleached out Johnny Depp. PG13. 134M. BROADWAY, FORTUNA, MILL CREEK, MINOR.

THE NUTCRACKER AND THE FOUR REALMS. The holiday classic gets the epic treatment with Mackenzie Foy, Keira Knightly and Hellen Mirren. PG. 99M. BROADWAY.