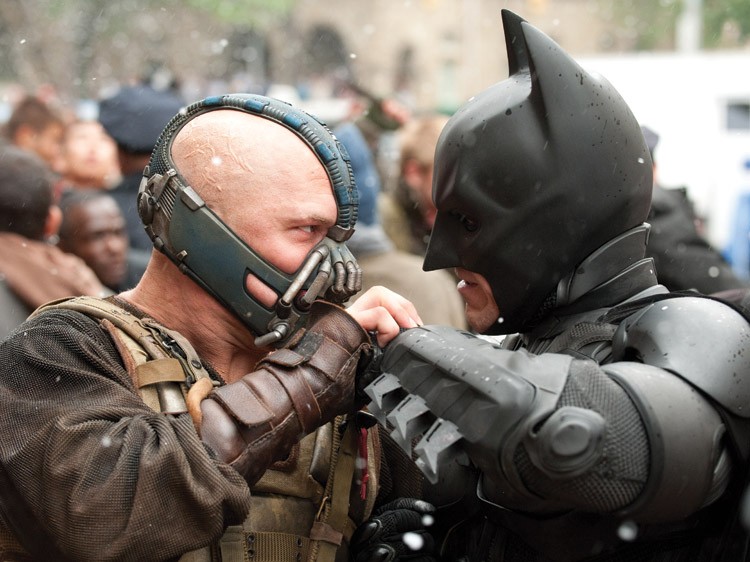 THE DARK KNIGHT RISES. Writer/director/self-avowed comic book super-geek James Gunn (Slither, Super) recently spoke with great fervor about the themes and undercurrents of the Batman mythology. In particular he referenced Batman's "unquenchable thirst [for] vengeance because somebody killed his parents, and he's got this bottomless pit inside himself [because] he can never do that." Gunn uses this idea to leverage his hatred of Tim Burton's Batman (1989).

I have and will continue to enjoy that version, but I get Gunn's point. Burton undermined the gravity of Batman's "unquenchable thirst" by making his parents' long-ago killer a modern-day super-villain (Jack Nicholson's Joker), thus closing the thematic loop. Basically, Burton got it fundamentally wrong, and it's one of the many aspects that Christopher Nolan has managed to get resoundingly right in his trilogy.

Even more than the previous two Nolan Batman movies, The Dark Knight Rises contains moments of palpable, aching sadness and is permeated with an air of genuine tragedy. It is a Hollywood blockbuster, so the ending can't be a complete downer, but Nolan doesn't let us -- or his characters -- off easy.

The movie opens eight years after the events of The Dark Knight (2008), on the anniversary of District Attorney Harvey Dent's death. To create a hero for Gotham to rally behind, Batman took the fall for Dent's murder, concealed the DA's nefarious deeds and made him a martyr. These years on, the plan seems to have worked. Batman has disappeared and Gotham enjoys an unprecedented peace. Police Commissioner Jim Gordon (Gary Oldman) knows the truth about Dent but stays quiet in the interest of keeping the peace.

Coincidental to all of this -- wink -- Bruce Wayne has become a recluse, divesting himself entirely of operations at Wayne Enterprises and skulking about his manor with a cane. Until a comely cat burglar (Anne Hathaway) cracks his safe, making off with his mother's pearls and something even more valuable. This sets up some large-scale white-collar crime and lays a foundation for the hostile takeover of Gotham by masked horror-show Bane (Tom Hardy). Batman springs into action, but eight years off have softened him. Bane breaks his back and tosses him into a hellish prison pit on the far side of the world.

This is pretty bleak stuff, and that's what makes this the perfect conclusion to what may go down as the definitive movie series of the past 10 years. Nolan manages to convey real hurt and danger while serving up some of the most exhilarating action in cinema. The Dark Knight Rises contains moments of raw sadness that took me completely by surprise. It shows Batman as a deeply flawed hero and Bruce Wayne as a wounded, soul-sick man without direction.

The plotlines explore themes of justice vs. revenge, the evils of fascism, appearance vs. reality and, finally, the fragile goodness of the human spirit. It's the stuff of Greek tragedy, and Nolan (with his co-writer brother Jonathan) incorporates these ideas seamlessly into an epic action masterpiece that dwells in the gray area between good and evil. They even bring in some references to the Occupy movement and the Wall Street collapse/grift of 2008.

Having said all of that, you will not like this movie if you didn't like the preceding two. (I can't imagine why that would be, but to each his own.) This is more of the same: impeccably detailed production design; rich, gorgeous cinematography; dead-on performances by great actors; perfect visual effects, etc.

Particularly worthy of note is the work of Tom Hardy and Christian Bale. As Bane's face is mostly obscured throughout, Hardy has to convey the character's menace and charisma with eye movements, voice and physicality. There were a lot of question marks around this movie before its release about whether anybody could top Heath Ledger's Joker in The Dark Knight. The answer is no, but Hardy knows better than to try. His Bane is a terrifying, complicated hulk, every inch the villain but possessed of a troubling glimmer of humanity.

Bale, especially in his scenes with Michael Caine, does a shockingly vulnerable turn. He plumbs the depths of Bruce Wayne's cavernous despair, never letting us forget he's a real person, despite the circumstances.

Taken altogether, Nolan's trilogy is a deceptively complex cultural document. The movies, beautifully crafted as they are, have a resonance that I think will outlast their aesthetic achievement. At the heart of one of the biggest blockbuster franchises in history is a careful, difficult commentary on the world as we know it. And that is an impressive feat. PG13. 164m.

SAFETY NOT GUARANTEED makes a fitting, if unlikely, companion piece to Nolan's Batman trilogy. Even though it comes from a different world in terms of production scale and storytelling, Safety is a uniquely early-21st century time capsule. It's loaded with the sadness, inarticulate nostalgia and post-ironic earnestness that are rapidly defining this time. I hope to see more smart little movies like this soon, and lots of them.

Aubrey Plaza (Scott Pilgrim vs. the World, Parks and Recreation) plays a depressed magazine intern on assignment to find a guy who's supposedly got a time machine. Turns out he's as weird and flawed as she is. He's played with scruffy brilliance by Mark Duplass, who is rapidly climbing out of the mumblecore pigeonhole onto the top of the indie-media mountain.

Safety is an imaginative, well-crafted little movie with a big heart and a firm grasp on its themes. I hope to see great things from writer Derek Connolly and director Colin Trevorrow. R. 86m.

THE WATCH. Four suburban guys form a neighborhood watch to escape their boring routine and -- wouldn't you know it? -- end up having to protect the world from invading aliens. This comedy, co-written by Seth Rogen, stars Ben Stiller, Vince Vaughn, Jonah Hill and Richard Ayoade. R. 100m.

The Arcata Theatre Lounge returns from a week off next Wednesday with another Sci-Fi Pint and Pizza Night. This time out the theme is "Moon Madnes." (I would have gone with "Lunar Lunacy," but that's just me.) First up is Missile to the Moon (1958), in which a scientist, his fiancé and a pair of escaped convicts travel to (you guessed it) the moon, where they find an underground kingdom of scantily clad women, giant rock men and a spider the size of an Apollo space capsule. That'll be followed by Rocket Ship X-M (1950), which claims to be "the screen's first story of man's conquest of space." The all-ages fun starts at 6 p.m.

SAVAGES. Oliver Stone brings his ham-fisted self-seriousness to this tale of ambitious weed dealers who get mixed up with a Mexican cartel and John Travolta's crooked CIA agent. R. 130m.

TO ROME WITH LOVE. Woody Allen's latest is a mess, a hodgepodge of pretty characters in a pretty European city and not much more. R. 112m.