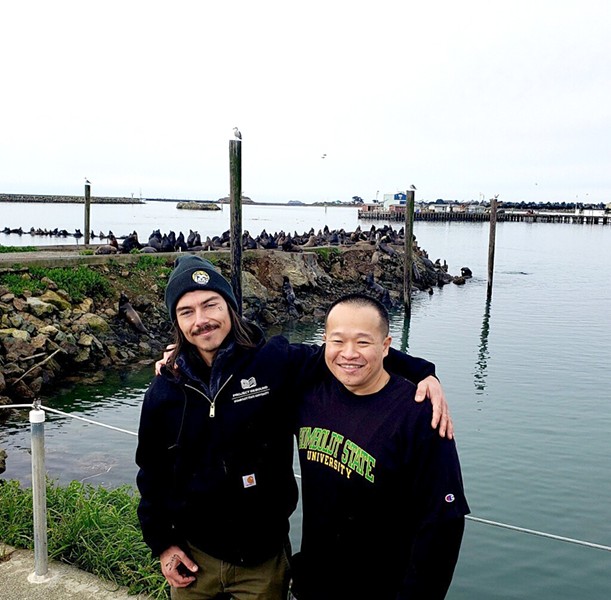 The first time I walked inside Pelican Bay State Prison I met David Nguyen. He was one of the first two graduates (along with Larry Vickers) to earn their Associate Degrees for Transfer from College of the Redwoods' Pelican Bay Scholars Program. A monumental achievement. At the time, I was in my second semester at Humboldt State University's journalism program and still trying to find my place. A few years older than most of the students, I had certain life experiences that separated me from my peers. How I even got into journalism was sheer luck and it probably saved my life a few times. After getting kicked out of high school and arrested, I eventually enrolled in a continuation school and earned my diploma. Being a wild teenager without parental guidance, I needed quick money, so I enrolled in American River College at an age I couldn't legally buy cigarettes. I failed all my classes because I spent most of my time doing and selling drugs in San Francisco. But that first semester I met a professor who asked what I wanted to do with my life — sort of an unfair question for a mixed-raced, single-parent-raised 17-year-old with a criminal record and identity issues. What a koan! My reply was simple: to write poetry. The professor laughed at me. Literally. Out loud. He told me there was no money in poetry but I could choose journalism as a career and still write what I wanted on the side. He became my first journalism professor.

My first attempt at college was unsuccessful, though. I was rearrested and spent the next half decade in and out of incarceration, the streets and rehab, while trying to keep my foot in the door of community colleges throughout the Sacramento area. A month before I turned 24, I was released from my last incarcerated experience at Rio Cosumnes Correctional Facility. While living in a halfway house, I read an article from the San Francisco Chronicle about a program at San Quentin State Prison. The reporter, although writing about positive impacts on programs, was referring to the incarcerated as other, and even detailing their crimes without context. What I mean by context is the history and backstory of the individual who committed the crime. Crimes don't happen in vacuums. Life is a continuous flow of causes and conditions, and the majority of us who have been incarcerated carry trauma, are impoverished, have had high rates of adverse childhood experiences, while lacking resources, trying to survive or simply operating with the only tools we learned. Needless to say, the article changed me. I subbed in my name while reading the sources and wondered if this is what society thought of me — labeled as just a conviction record and nothing more. It was at that moment I decided to seriously pursue journalism and write stories from the point of view of the currently and formerly incarcerated. I wanted to do something that Nguyen and his circle were already actively pursuing while still inside — change the narrative.

Fast forward to 2019 in a prison classroom on B yard at Pelican Bay.

I was not what the students in CR's Pelican Bay Scholars Program were expecting after they were told a journalist was coming to visit. (I know this because they all told me.) I was young and Asian American, with tattoos on my face and hands. I gave them a longer monologue of the paragraph above and told them I felt more comfortable in this classroom setting than I currently did at HSU. I kept hearing the name David Nguyen in conversation and how impactful he was inside the prison. He was mentoring younger guys, encouraging programming and education, participating in Buddhist sangha, and had even started a journalistic newsletter with two other students, Kunlyna Tauch and Brian Yang, called The Pelican (I'm still impressed by the material in those first issues). I could relate to all of these things and we hit it off quick. He had a glowing smile that spanned from one ear to the other and a contagiously positive energy. I distinctly remember his laugh and the way he used his hands to get his point across. He was involved with nearly every program under the sun and I deeply admired that about him. He didn't allow the prison setting to affect his behavior, but instead used it to influence his drive to spread positivity.

I interviewed him for nearly two hours and learned his life story — immigrant parents fleeing the traumatic effects of the Vietnam War, isolated and bullied in school for being Asian and the luring effects of finding one's place in a gang. The first question he asked me was how could we get him the same voice recorder I was using in our interview so he could record interviews with guys on the yard and in classrooms. We were instant kin. You can read the story I wrote ("The Graduate," July 11, 2019) for all the details, but we stayed in contact and corresponded well after publication.

David was soon transferred from the level 4 B yard to the level 2 D yard, where there was more mobility, programming and, most importantly, a greater chance of getting paroled. After I visited David the first time, I returned to the prison throughout the year for various occasions: Dell'Arte Theatre's gala shows, higher education workshops, documenting the Anti-Recidivism Coalition's (ARC) first ever graduation, talking with students about how to start a campus club, promoting Project Rebound (a California State University funded program for formerly incarcerated students that I now run at HSU) and, of course, to write more stories about programs and the guys inside. What everything had in common, other than relating to the prison, was everyone involved with facilitating a program or volunteering knew David, even if he wasn't in their program. That's David. Even if he wasn't in your class, he promoted your work and encouraged others to participate. He was all about exploring oneself for rehabilitative efforts, building community and sharing loving-kindness with anyone around him and beyond.

I learned David was granted parole through a Buddhist sangha correspondence project I began with Kunlyna Tauch when COVID hit. Because all programs were shut down and the prison wasn't allowing volunteers, even for religious services, Tauch gathered names of participants who were involved with the meditation services local Buddhist practitioners brought in before COVID. We decided to continue Buddhist services through correspondence readings and responses. As you might guess, David was well involved in that, too. I remember receiving a letter and a card in the mail from him. I was expecting a response to a Buddhist teaching but instead learned he had been deemed suitable for parole. The card reflected nothing but humble gratitude toward all the volunteers and program coordinators who helped him on his journey. After 16 years, the time had finally come.

On Feb. 8, a Monday, while the sun reached its apex above Jedediah Smith State Park, David Nguyen, wearing a homemade pink Kirby face mask, walked outside of Pelican Bay State Prison into the arms of his family. The air was crisp without a sign of the Pacific Northwest draft we are normally embracing at that time of year. Once the prison gates disappeared from the rearview mirror, David was welcomed into a reunion at Crescent City's lone Starbucks with his father, brother, two sisters, Project Rebound HSU correspondence specialist Kory Lamberts, audio journalism professor and creator of the Pelican Bay UNLOCKED podcast Paul Critz, Pelican Bay Scholars' program coordinator Tory Eagles, myself and, most importantly, David's mother, whom he hadn't seen since he had been incarcerated. Their embrace reminded me of how my Japan-born mother reacted once I began walking a different path. The Lotus Sutra says, "Only a Buddha together with a Buddha," and that's what I witnessed in their reunion.

David's first day out was filled with a photo shoot at his now alma mater, College of the Redwoods, walking among groves of actual redwoods (and hugging them), long silences across crescent moon beaches and a slow submergent spiritual baptism in the freezing current of the Smith River (which he somehow convinced me to swim in, too). Even better, Paul Critz filmed the entire celebration.

David now lives close to family in Los Angeles and is already heavily involved in community outreach work. On top of working for a social justice community coalition involved with the criminal court system, he's walked in solidarity at a demonstration raising awareness of recent hate crimes against Asian Americans, participated in ARC food drives, was handpicked to be interviewed for a fellowship to learn more about community building and was featured in the Los Angeles Times for his work dismantling fake news about vaccinations. Did I mention David's also a coder? Well, that's just another skill he's continuing to hone while experiencing freedom outside prison walls.

When we talk on the phone or FaceTime throughout the week, David still has the same contagious laugh and ear-to-ear smile I remember from when we first met. He is a shining example of why we should never be judged for our past convictions and why we should completely overhaul our draconian criminal justice system that holds punishment as the only solution. Formerly incarcerated writer, playwright and award-winning author Jimmy Santiago Baca once told me it is his deepest, deepest belief that our greatest warriors, activists and world changers are locked away in prison. Today, we have one fewer of them incarcerated and he's now diligently using his experience to make our community and world a more positive place.

T.William Wallin-sato (he/him) is the programs coordinator for Project Rebound at Humboldt State University and an M.F.A Poetry student at CSU Long Beach. He is also a local journalist taking a short hiatus from freelance reporting to focus on current and formerly incarcerated students within his program.