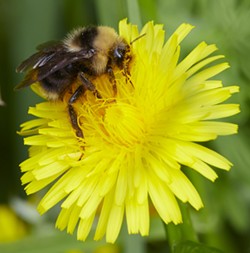 Despite the dreary weather, life must go on. Eager to get along with their lives, our local insects show up even for the brief patches of sunshine that occasionally grace my backyard. Mostly disdained by the local honeybees, oxalis, dandelions and English daisies draw a crowd.

Aside from the digger bees mentioned previously ("Looks Can Be Deceiving," April 7), there are quite a few other native bees out and about. On a casual walkabout in my yard I counted half a dozen different species. From the yellow-faced bumblebee, the largest bee in my backyard, down to tiny ones, some smaller than the bumble's hind leg, the demands of life and parenthood drive them to seek nectar and pollen wherever and whenever they can. While the sugary nectar supplies the adults with high octane fuel to power flight and nest building, pollen provides protein and other nutrients to build the bodies of the next generation.

Along with the bees, flies and butterflies, there are even occasional day-flying moths like the Western white banded carpet moth that are out these days. Looking a lot like petals from a flowering fruit tree fluttering in the wind, these thumbnail-sized moths usually fly too high for me to get a good photo. This makes it a special occasion when one comes down to my level and lands to pose for a photo. A little research told me the caterpillars of this moth dine on hazelnut foliage.

Another insect that showed itself this week was the green pine chafer (Dichelonyx backii). These half-inch metallic green beetles can be seen flying around some of our local conifers. Last year they were on my fir trees, this year I saw about a dozen flitting through the boughs of my neighbor's cypress trees.

Late the other evening, my wife and I went out for a walk. Along the road we saw several large shiny brown millipedes. In the middle of the road, apparently investigating a smeared member of that species, was something that at first looked like a slightly smaller one. On closer inspection, it was something completely different. I didn't have a camera or a jar, so my very tolerant wife volunteered to stay and keep track the bug in question while I got something to collect it with. For the first time in years I actually ran (it was a short distance) and retrieved an empty spice shaker bottle. They're my favorite collecting vessel; made of tough of plastic they come in a convenient variety of sizes, are break-proof, clear and come with lids already perforated with air holes.

I'd recognized this species as the western banded glowworm (Zarhipis integripennis) from books, although I'd never seen one in person.

Unlike the Douglas fir glowworm (Pterotus obscuripennis) I have written about before ("Glowworms and Fireflies," May 18, 2017), this one preferentially hunts large millipedes instead of snails. At about 2 ½ inches long, she's bigger than the biggest Pterotus and, instead of glowing solely from two body segments near the tip of her tail, this species glows throughout most of her body. The opaque tergites on her back block the glow in places giving her a ladder-like appearance.

Photographing these creatures is challenging since there just isn't a lot of light to work with and supplemental illumination can wash out the insect's glow. To make matters worse, this one really wanted to move around. After a couple hundred exposures, I returned her to the weeds near where we found her. With any luck, she'll meet a nice young fella and they'll make more of their kind.

Read more of Anthony Westkamper's HumBug on Sundays at www.northcoastjournal.com