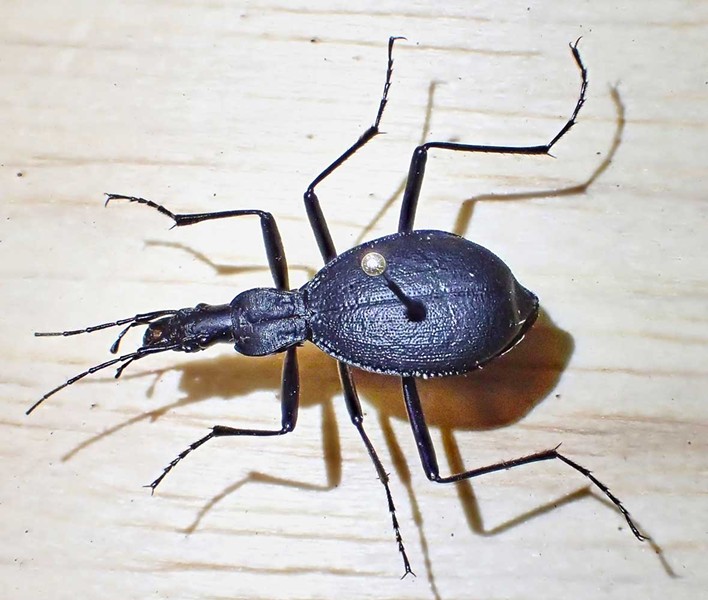 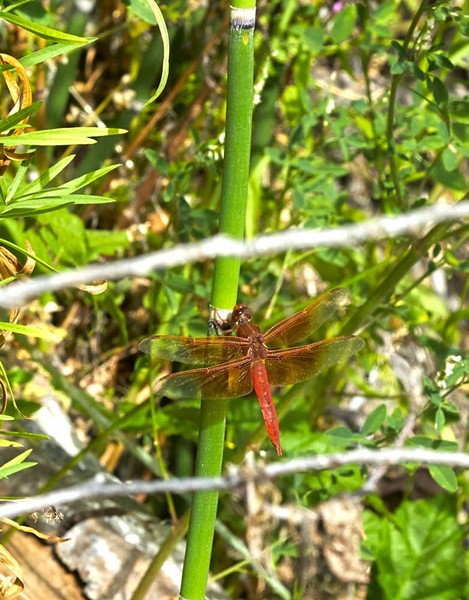 Photo by Anthony Westkamper Flame skimmer recreates a carboniferous-era scene perching on a horsetail, which, like the dragonfly itself, far predates the dinosaurs.

A recent walk along the Van Duzen River yielded a couple of interesting things. The only dragonfly I saw was a flame skimmer (Libellula saturata). This is the brightest orange dragonfly I know. I rarely see this species; I suspect they travel through my area just stopping to catch a quick bite.

I felt something on my hand which I thought at first might be a tick. When I looked it was tiny and gray. Then I thought maybe it was an aphid, although I'd never seen one of that exact color before. It was only after I took a very close look with my little Olympus camera in maximum optical magnification (4X) mode that I realized it was two of the tiniest weevils (family curculionidae) I've ever seen.

There was a lot of damage to some of the little willows that grow right down on the river bar. On close inspection, I found a great many blue willow beetles (Phratora vulgatissima).

A bit farther upstream I saw the one and only tiger beetle (Cicindela oregona) for the day. While in the past they have been very common, flying ahead of me when I walked along the sandy places, I've seen very few lately. They are usually pretty skittish but this one seemed oblivious to me and my camera. I suspect something was impairing his normal neurological responses.

On a recent walk through a local redwood grove, my young companion, knowing I'm interested in bugs, pointed out a beetle on the path. It was dead and, although it was in the middle of a footprint, externally undamaged. So I collected it. Hey, it was dead when I got there. Interestingly enough, it was still pliable, which indicated it hadn't been dead long enough to dry out. But it wasn't playing possum because two days later it was still in the exact same position we'd found it in and rapidly losing flexibility.

So I put it in my killing jar to be 100 percent sure and a day later pinned it. It is one of the Cychrini tribe of ground beetles. This group is notable as snail hunters, using their narrowed heads to access the last little bits of escargot from the shell.

On another recent outing into the deep woods several orange butterflies displayed serious territoriality, chasing others away from their perches and through the patches of sunlight filtering down through the trees. These are Polygonia satyrus, named for their apparently ragged wings.

My little marigold patch is now hosting several species of native bees and, notably, I haven't seen any honeybees on them. One little native was a digger or polyester bee (genus Colletes), known to line their burrow with a cellophane-like coating, protecting their brood from water and fungi.