Dealing the Art Community In

The Card Show at Epitome Gallery 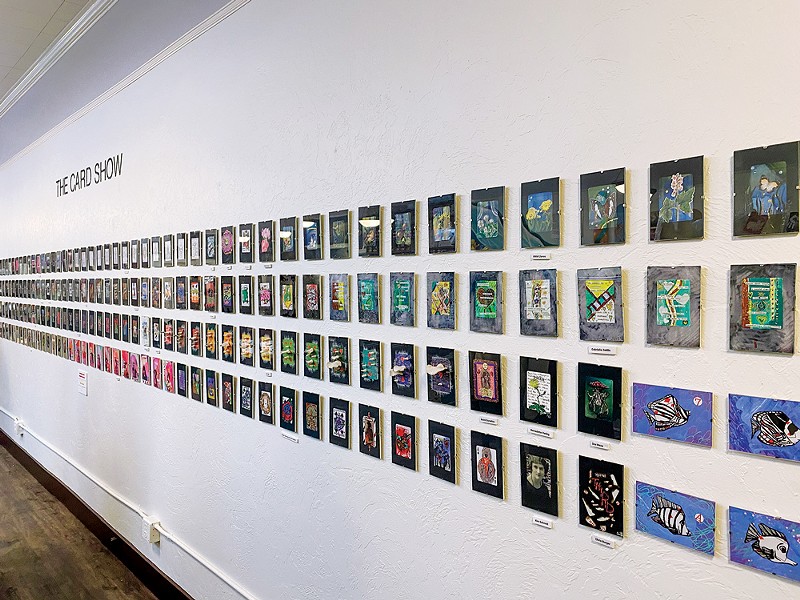 Photo by L.L. Kessner The wall of more than 270 cards on display for The Card Show at Epitome Gallery.

If you're in the market for unique $30 gifts this season, you can bypass the typical options and pick up one-of-a-kind artworks at Epitome Gallery's exhibition The Card Show, supporting local artists in the process. Even if you aren't shopping, this accessible and inclusive community art event, with its wildly diverse showcase of Humboldt makers working on a miniature scale, is worth checking out for the visual experience in its own right.

Epitome Gallery is a contemporary art-expression-dedicated, community-minded exhibition space and supply shop, and The Card Show is an expansive presentation of playing cards transformed into artworks by a broad range of Humboldt artists. The pieces are all available for purchase first-come, first-served, right off the wall. Out of each sale, $20 goes directly to the artist, an unusually generous cut that makes the show a winner for the buyers, the artists and the viewing community.

The Card Show began more than a decade ago, when four members of the art collective Empire Squared divided a deck and each transformed a suit. This first set of cards, remade by artists Donovan Clark, Rachel Grusin, Jeremy Hara and Forest Stearns, was displayed at Don's Donuts in Arcata. For nine years after that, The Card Show continued as an anticipated event each December at Humboldt Carpet Showroom. It grew to include Empire Squared members as well as other artists in the community.

With a card of her own in this year's show, Violet Dinning, whose father, Robert Dinning, owns Humboldt Carpet Showroom, is a big fan. "Tiny, beautiful oil paintings, wild colorful graffiti, needle felted bugs, assemblages, collages. Real, small, wonderful works of art, with great price tags, made art and artists! So accessible." Once she was invited to participate, she says, "The invitation sparked my desire, and I sanded and gessoed a card that same night." Her enthusiasm is echoed by many other artist participants.

Forest Stearns, who now lives in the Bay Area and makes art on such remarkable surfaces as the Google Quantum Computing Space and working satellites, relates his drive to put art in space with the collective drive of Empire Squared. The mission of the collective, according to Stearns, was to amplify the human in the community and bring out the most creative energy possible. He adds that a number of artists built the foundations for their professional practices with Empire Squared.

For The Card Show this year, Stearns collaborated with fellow Empire Squared artist Tony Van Groningen, who lives in Santa Barbara. He says, "[Groningen] and I have been dear friends and art making compatriots since we lived together in the seventh grade in Sonora, California. It is such a joy to make art with old friends and this show is such a cool opportunity to make a number of pieces for one spectacular exhibit. We made three suits of cards together while he was up visiting last week. For our pieces, we used a gold wash on gray paper as a base and glued that paper to playing cards as a drawing surface, and then over amazing craft beers, music and the flow of multiple decades of friendship and laughter, we drew on the cards and passed them back-and-forth as the pieces developed under our fingertips."

Artist Gina Tuzzi used her cards to explore and re-present female muses who inspired notable historical artworks. She envisioned her card-collages as womb-like environments for her subjects "to exist in, free of the historical confines of the male gaze."

Oil painter Erica Brooks approached The Card Show this year with a sense of nostalgia. A participant in earlier incarnations of the show, Brooks remembers the experiences fondly and drew on other personal happy memories to depict water and a school of tropical fish from Hawaii on her cards.

On her card, Monica Topping created a world for a Joker, making a field of flowers for him to ride through on his bicycle. There's a two-fold connection to cards in Topping's work, as her partner and fellow participating artist Robot Adams collects playing cards he finds randomly out in the world. Topping made the flowers for her Joker out of bits of those discarded cards, so that her entire tiny work is composed of repurposed and reinvigorated material.

Robot Adams' playing card collection provides a natural entry point for him into this show. With a nod to a Buddhist notion that "One finds what one looks for," Adams states that he finds about 30 cards a year on the ground around town. He connects the action of creating art out of found objects with "[playing] the hand you're dealt." For his work, Adams drew on cultural association of playing cards, making note that there are no jesters in Alice in Wonderland. "If the Red Queen believed in fun," he muses. "She would have jokers or jesters to make her laugh."

Epitome Gallery is located at 420 Second St. in Eureka and is open Wednesday-Saturday from noon to 6 p.m. and Sunday noon to 4:20 p.m. The Card Show runs until Dec. 26.

L.L. Kessner (she/her) is an Arcata-based artist and writer.