Researchers publish a website detailing deaths at the Oregon school, including children from Humboldt 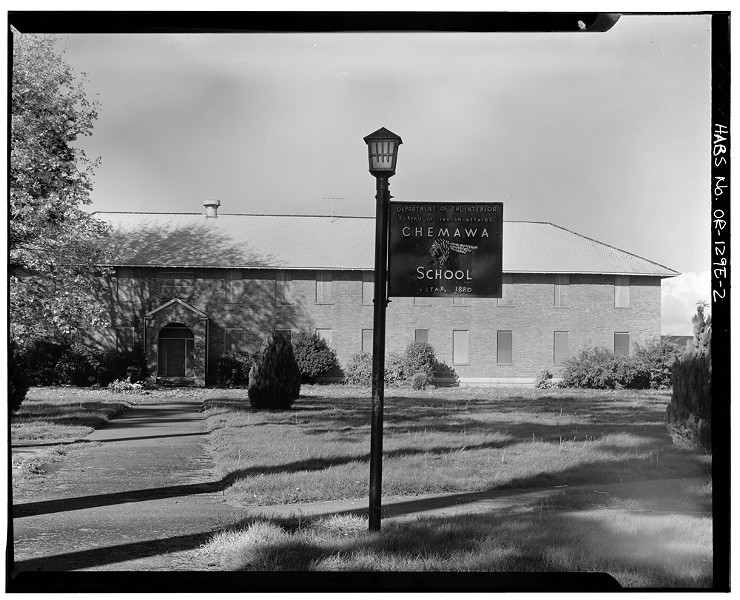 I.G. Davidson, courtesy of Pacific University A view of the boy's dormitory in the Forest Grove Indian Training School, circa 1881, before the school was renamed Chemawa Indian School.

Reddick and Guggemos' spreadsheet detailing the burial locations and causes of death for students buried at Chemawa Indian School. 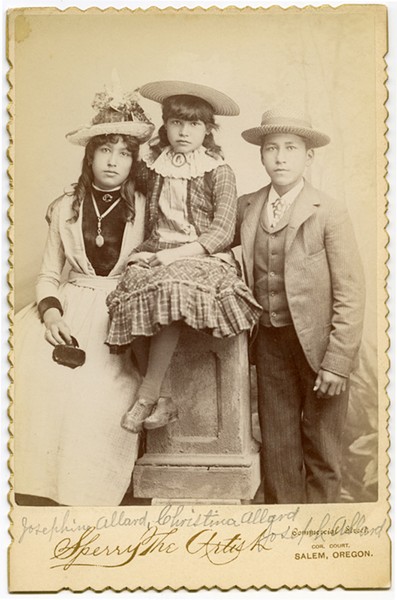 Myra E. Sperry, courtesy of Pacific University A portrait of Josephine, Christina and Joseph Allard, three students who were members of the Snohomish Tribe and attended Chemawa Indian School in Salem, Oregon, circa 1889.

Charlie Feister, a citizen of the Klamath Tribes, was a runaway from Chemawa Indian School when he was shot dead in 1907 while trying to steal food from a store in Chemawa, Oregon.

A short article in the Weekly Chemawa American student newspaper describing the incident fails to mention that Charlie was 11 years old at the time of his death. Charlie and a friend were living in a little camp in the woods not far from the school.

We know these details today thanks to a combined 35 years of dogged work by SuAnn Reddick and Eva Guggemos who published the results of their research in a public website on Indigenous Peoples' Day.

The Deaths at Chemawa Indian School website contains the names, burial locations as well as notes about students who died at the school between 1880-1945. About 270 students, including some from Humboldt County, died while in custody at Chemawa; 175 are buried in the school cemetery. According to Reddick and Guggemos' research, the remains of approximately 40 students were returned home; the locations of at least 50 student's remains are unknown.

"We offer this site with the families and tribes of Chemawa students foremost in our hearts and minds. We hope to honor the memories of the students who endured the horrible system that Chemawa once embodied: a system that was designed to exterminate Native culture and which imposed untold trauma on generations of Native people," Reddick and Guggemos wrote in their introductory notes on the website.

Reddick, independent scholar, writer and Chemawa historian, and Guggemos, archivist and associate professor at Pacific University, gathered information for the website entirely from public records located in the National Archives and Records Administration, digital newspaper archives, county death certificates as well as data included in the Chemawa cemetery map. The site is hosted by Pacific University.

"This was simply a matter of organizing the information and making it available to people who are doing research," said Reddick.

The recent media stories of discoveries of children's graves at Canadian residential schools encouraged the women to make their research available to the public sooner than later. Although there is much more work that needs to be done, Reddick and Guggemos agreed that they needed to share the information with the public.

"Suddenly though the horrendous events in Canada, the work we've been doing all these years is relevant; the media was finally talking about boarding school cemeteries," Reddick said.

Reddick began the work in 1996 when she was hired to create a recreational ropes course at Chemawa to be used as part of the school's addiction therapeutic program. It was then that she noticed an overgrown area of the campus containing rows of identical metal plates engraved with names and dates marking the graves of children who died at the school. She soon learned that the cemetery was demolished sometime in the 1960s destroying many of the original wooden markers.

According to Reddick's conversations with two former employees of the school, Louis Belgarde and Charlie Holmes, local tribes were distraught over the demolition of the cemetery and demanded it be restored. Holmes, who taught shop at Chemawa, had his students create the metal plates bearing the names of the deceased children. With the help of school archives and a cemetery map, Holmes and Belgarde marked out the original grave locations as best they could and installed the new markers. Both Holmes and Belgarde have since died.

Standing in the cemetery, Reddick felt as though the children were telling her they wanted to be found; they wanted their names to be recognized and acknowledged.

"So, I began my research and it kind of snowballed; I became the official Chemawa historian," said Reddick.

She has done most of her work on a volunteer basis.

About 10 years ago, however, Reddick's research grew legs when Guggemos joined Pacific University. At the suggestion of student archives assistant Shawna Hotch who graduated from Chemawa, Guggemos grew interested in the history of the Forest Grove Indian Training School, which later was moved from Salem to Chemawa to become the Chemawa Indian School. Guggemos met Reddick and learned of her research; the women soon embarked on a collaboration.

What began as primarily an academic, intellectual project for Guggemos, a professional archivist, quickly grew personal.

"I have four children; it's hard to read these things about children that age dying and not reflect on what it would be like to have that happen to your own children," she says.

The knowledge that these deaths happened is not news to anyone in tribal communities, noted Guggemos.

"By documenting their deaths in this way perhaps we can show patterns of what happened and provide another avenue of evidence from the past," she says.

Who they were and how they died

Most of the children buried at Chemawa were from Alaska, Washington and Oregon, in that order. Some were also from California, including Humboldt and Del Norte counties, Idaho and the Plains states.

The researchers note that the database includes the students' tribe as reported in Chemawa records but notes that "the school's interpretation of a student's tribe may not always match with how a student would have self-identified."

Many children died during the Spanish flu epidemic; tuberculosis, however, was the primary cause of death. Several children, like Charlie, died trying to escape; many drowned trying to swim across rivers only to be brought back to the school for burial. Others died under suspicious circumstances, including young Liberty Shelton from Hoopa.

Like Charlie, Liberty was 11 years old when he died after a fall from the third story of the boys' dormitory on Aug. 17, 1926, shortly after being taken from his home in Hoopa and sent to Chemawa. A local newspaper that reported on his death wrote that school officials said "the boy was subject to walking in his sleep and probably stepped out of the open window."

Liberty was supposed be sent back home for burial, according to the article, but instead he was interned in the school's now demolished cemetery. With him is Nellie Sanderson, who died nearly two decades earlier of what is only described as "a lingering illness." A mere 7 years old, she was from Arcata, according to the Chemawa archive. An article in the school newspaper marking her death describes her as a "bright dear little girl."

Typhoid, pneumonia, influenza and the Spanish Flu took others, including Gertrude Hostler and Adeline Quimby, who died two days apart in October of 1918. Three children also from Hoopa — Walter Dow, Della Dow and Lilly Dow — died in quick succession over the course of three years. First was Walter, 9, of influenza in March of 1900 followed by Lily, 7, of typhoid in June of 1901 and Della, 10, of pneumonia in July of 1903.

"It's hard to image what these children and their families must have went through. The best we can do to honor them today is to fiercely protect and support the children we have now," Hoopa Tribal Chair Joe Davis said. "By honoring and acknowledging those we have lost in this way, we can help ensure that these types of atrocities do not happen again. Our prayers are with all those who have been lost and their families. While we must never forget, we also must not give up hope for being healed."

Hoopa Valley High School teacher and ceremonial leader Melodi George-Moore told the Two Rivers Tribune that she remembers stories about elders who hid their children from the forced school system to avoid the atrocities so many children experienced during the boarding school era. Just a generation or two removed, she said the trauma remains.

"We're unpacking the trauma of our ancestors — the survivors. And we are survivors," she told the paper. "This true history hasn't been talked about in textbooks. Part of colonization is erasure of true history. There are a lot of people who never get to deal with that trauma and those emotions. There's a cycle of grief and a way we process grief. Our bodies remember the trauma. We are tired of carrying around that burden. We need to unpack the trauma, speak the truth about our history, witness that history become acknowledged, and pray in order to truly heal."

Addressing the California State Parks Commission last month before it voted to restore the name Sue-meg to the state park north of Trinidad, Yurok Tribal Heritage Preservation Officer Rosie Clayburn choked up as she related how the types of intergenerational traumas inflicted by boarding schools are not long in the past. She said she's had the opportunity to talk with Yurok elders who were among those taken from their homes and sent to boarding schools, saying the scars of what they endured — including the beatings received for speaking their native language — are still evident.

"And those folks, when they would start to speak Yurok again, it was hard for them," she said. "They would break down and cry."

As far as creating a memorial or repatriation, Reddick and Guggemos agree that tribes should make these decisions. "I imagine it will involve a lot of internal discussion on their parts," Reddick said.

Freddie Lane, a citizen of the Lummi Nation, attended Chemawa in the 1980s; he expressed disappointment that students were not taught the history of the school.

"We heard from our parents and grandparents about atrocities that happened there," Lane says.

Lane believes that authorities chose to demolish the cemetery back in the 1960s because they wanted to erase the school's troubling past.

"The good work by Eva and SuAnn is bringing us hope in preserving this history," Lane says.

On Indigenous Peoples' Day, Lane and others gathered at Chemawa cemetery. "We wanted those children buried there to know we haven't forgotten them; we are working towards healing," Lane says.

The women's decision to go public with their research now was driven by a desire to give people some amount of hope.

"This work is hard but it can be done. This is not an impossible task," Reddick said.

Reddick and Guggemos hope to share what they've learned with others, the methods, strategies and resources that worked best for them. They want to publish articles and perhaps conduct workshops for those who are interested.

"Beyond the specific information about Chemawa, the most important thing about this research is showing that these names, the children can be found," says Reddick.

A version of this story was first published by Indian Country Today.