nventions and Seduction for Solo Guitar by Al Di Meola 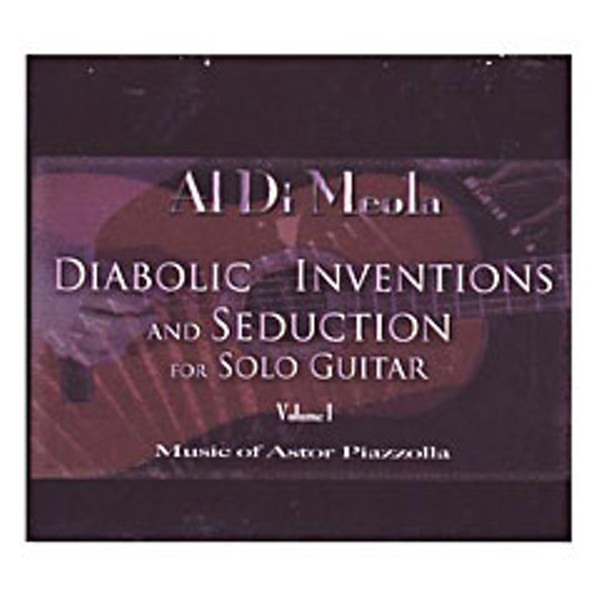 Widely recognized for his technical mastery and Latin flare, guitarist Al Di Meola gained notoriety playing with Chick Corea's jazz fusion project Return to Forever. Di Meola quickly established a successful solo career and spent the '70s and '80s integrating traditional Latin sounds with intricate song structures and his signature fret-shredding solos. By the early '90s, Di Meola began to distance himself from the fusion scene and focused attention on more acoustic and world music approaches, including forays into Middle Eastern, Afro-Cuban and South American sounds. These efforts not only garnered him new praise and acclaim but added another dimension to his artistic becoming, a progression that his latest offering Diabolic Inventions and Seduction for Solo Guitar continues.

Diabolic Inventions is Di Meola's second full release dedicated to the music of late Argentinean composer Astor Piazzolla. Known as the world's premier bandoneón player, Piazzolla was responsible for leading the nuevo tango revolution through his controversial introduction of classical and jazz elements to traditional tango styling. The close friendship between these two men is well documented, and Di Meola serves his master well by reinterpreting Piazzolla's musical vision and presenting his legacy to a new generation.

Though he's always been revered for his blazing fingerwork, Di Meola plays with considerable restraint, allowing space between notes to create rhythm and cadence. His disciplined approach generates warmth and smoothness as he works the sustainability of his notes to their maximum potential. He has replaced an obsession with speed with a dedicated focus on emotion, as clearly displayed on "Romantico," one of Piazzolla's most popular guitar compositions. This is not to suggest that Di Meola has completely abandoned his former craft — tracks such as "Tema de Maria" and "Milonga del Angel" spotlight the nimble dexterity and sweeping quickness that initially defined him.

Simply relying on handcrafted Spanish and Sicilian guitars, Di Meola has no reason to fiddle with high-tech gadgetry. Such consideration is reflected in his choice of the cahon and djembe skins as the album's major sources of percussion. Both of these simple Afro-influenced instruments are played by hand and create subtle organic rhythms designed to accent Di Meola's playing, which at times seems to create its own sense of rhythm as his fingers gently flutter up and down the fretboard.

The listener appeal of Diabolic Inventions should be wide. The combination of angular chords and spontaneous soloing with rich and recognizable tango melodies offers listeners from all traditions moments in which they can admire, as well as expand their musical literacy.

Also of note is the release of a new Di Meola DVD — Speak A Volcano (Return to Electric Guitar). Fans of both early and recent era Di Meola will appreciate this live performance from 2006 as he plays both electric and acoustic selections, including Chick Corea's "Señor Mouse" and three Astor Piazzolla compositions.