Slideshow "Different but Not" 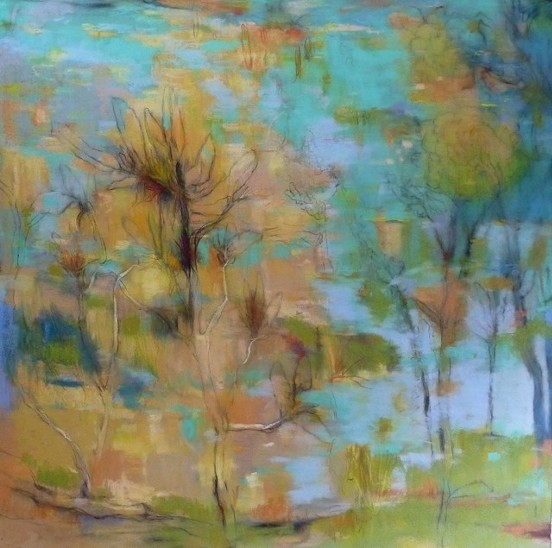 Sometimes, things that seem to have little or nothing in common on the surface actually end up having more commonalities than differences when broken down into core components. This can be a surprising and informative revelation -- one to keep in mind when viewing local artist Victoria Ryan's new work.

Ryan is known for her evocative landscape paintings, but she is unveiling something new at Plaza in Arcata this month: work from her Abstractions series. While the medium is familiar, primarily pastel on paper, this new series is visually distinct from her representational work. It's definitely different. Or is it?

Ryan has been working on abstract paintings on and off for more than 15 years, but this is her first public showing of non-representational work. The show is not, however, a sign that she is turning her back on the landscape painting she is known for. In fact, she views the new work as a parallel pursuit.

"These are so different, but not," Ryan said, "because I think of it all as abstraction. ... This kind of work is interwoven with everything that I was doing." In an email, Ryan even went so far as to refer to her new abstract work as landscape "deconstructed or, conversely, in the process of becoming." In this respect, the Abstraction series really isn't a deviation from the path she has been following for more than 30 years -- more like changing lanes than taking a different road.

Even in her most representational work, Ryan is not trying to mimic reality as much as she is trying to represent a sense of "heightened reality" through the manipulation of color and composition. She says her landscapes draw on "a lot of psychological and interpersonal dream imagery." She draws a distinction between her representational work and that of plein-air painters or landscape artists whose purpose is to reproduce the natural world, visually or emotionally, as it appears. Ryan feels more of an affinity with representational artists like Edward Hopper who used the lines of interiors, facades and landscape as a means of communicating much more than a physical space.

While this internal, personal exploration is a component in the landscapes, it comes to the forefront in Ryan's abstract work. "These are a lot more intuitive from the get-go," she said. "I'm really working from this place of, like, automatic painting ... sometimes it just starts with color ... subtle changes of color and line." When asked to elaborate on the difference between representational and abstract work she was emphatic. "It's so freeing! It's kind of like the difference between going to a therapy session and meditating. It's like going to a place where I can really just let go."

Despite the title of the series, the work is not pure abstraction: The paintings contain immediately recognizable flower and plant imagery. "They kind of have a botanical feature to them," said Ryan. There are drawn elements in the work as well, roughly sketched lines in charcoal, something Ryan is particularly fond of. "Drawing and actually incorporating line in the work, that's so important to me, and I just love to be able to use that," she said.

With the roughly sketched lines and the intense layering and gradation of the colors, viewers get the impression that they are watching recognizable images evolve from elemental components. These paintings are, in a sense, the artist's interpretation of creation -- the birth of the natural world, or even of reality itself. Ryan aptly likens the series to a "sketchbook" for the collective unconscious.

Ryan's work will be up at Plaza (808 G St. in Arcata) from Friday, Jan. 11 until Thursday, Feb. 28. In addition to the pastels, the show includes a small group of Ryan's oil paintings. There will be a reception for the artist Friday, Jan. 11, from 6-9 p.m. in conjunction with Arts! Arcata.