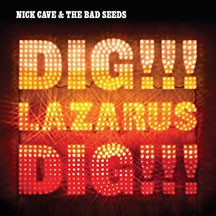 By Nick Cave and the Bad Seeds

Dig, Lazarus, Dig!!!, the new release from Nick Cave and the Bad Seeds, is Cave's pop record. Well, it's his version of pop. Following on the heels of the elegant, stylistic, white gospel, two-disc epic Abaittoir Blues/The Lyre of Orpheusand the cathartic dirge of his Grinderman side project (an elder kin to his early band The Birthday Party), Digpresents a simpler arrangement, stripped down to the essentials: drums, bass, piano/organ, guitars, vocals and texture. Dirty Three member Warren Ellis has made his role more pronounced over these recent recordings, and his contributions are what former Bad Seed Blixa Bargeld used to contribute to Cave's recordings, which is noise, sound and texture — in the right places. Ellis' approach is more subtle and nuanced, fitting in with Cave's own maturing sensibilities.

On the majority of his earlier releases, Cave seemed to always combine two structures evenly. On one hand, there was his keen sense of melody and delivery, often drawing on his soulful crooning, reminiscent of Leonard Cohen or Johnny Cash, two noted Cave influences. On the other hand, there was the chaotic, aggressive barrage of cacophony. These two elements, in Cave's hands, balanced one another out or added an unsettling unpredictability. However, in his two recent releases, Cave seemed to have separated these two musical spheres. Fortunately, Dig, even though it has stripped nearly all elements of chaos and barrage, avoids the flatness of his 2003 release Nocturna, with a deft execution, employing various pop and garage rock influences. This is to the great credit of the Bad Seeds, a tight unit of musicians, who play with economy, resourcefulness and subtlety. Drummer/percussionist Jim Sclavunos' brilliant congas (and other percussive contributions) on the lovely "Moonland," Mick Harvey's steady guitar work (best exemplified in "Midnight Man") and Warren Ellis' exceptional work on an array of instruments (viola, mandocaster, tenor guitar, flute and loops), notable highlights.

Surprisingly, it's Nick Cave's lyrics that fall short. They lack the gifted storytelling, the pained emotional vulnerability, and, most importantly, the conviction evident in the bulk of his output. Here, Cave revisits old song characters, such as "Henry" (from Henry's Dream), "Deanna" (from Tender Prey), as well as old real-life characters (such as "Miss Polly" for PJ Harvey and "Alina" for Anita Lane), with an observer's indifferent distance, while failing to make a convincing bridge to something more elevated (tomythology and to John Berryman's poetry). On nearly half of the record, his poetry just seems uninspired. If only the entire release could have captured the simple, spare beauty of "Moonland," "Lie Down Here (& Be My Girl)," "Jesus of the Moon" and "Midnight Man," Dig, Lazarus, Dig!!!might have been a brilliant effort. Instead, this serves as a transition record (albeit an interesting one) for Nick Cave, who may be in need of an emotional recharging — perhaps stretched thin by his film score and screenwriting work, as well as his side musical projects. One hopes that he can find a revived lyrical and emotional content, and an inspired subject matter to match the Bad Seeds' adept ability to take on new musical territories. Of all songwriters, Cave should understand that you cannot have a half of a Phoenix rise from the ashes.