When the dust settled from an Election Night short on drama and long on waits, it left a handful of candidates looking to take office with what can fairly be described as voter mandates.

The county's final election night report posted shortly before 1 a.m. and included 14,844 ballots counted, equaling about 17 percent of registered voters, indicating either a very low turnout or a lot of ballots yet to be counted, or perhaps both. As the Journal went to press, it was unclear exactly how many votes remained to be counted countywide, leaving some races hanging in the balance. Others, however, seem safe to call.

On a night of big wins, none was bigger than challenger Cheryl Dillingham's victory in the highly contentious auditor-controller race. Leading big from the first report on, Dillingham closed the night with 70 percent of the vote to unseat embattled incumbent Karen Paz Dominguez. Dillingham, a former 30-year county employee and the current finance director for the city of Rio Dell who campaigned on a platform of competence and professionalism, will soon take over an office that has been mired in controversy and discord for years, culminating in state and county lawsuits accusing Paz Dominguez of failing in her duties. It certainly appears Dillingham will have her work cut out for her in clearing a backlog of delinquent financial reporting in the office, but Paz Dominguez indicated during the campaign that if she lost the race she would do everything possible to oversee a smooth transition.

In other races, Deputy District Attorney Stacey Eads seems poised to become Humboldt County's second female district attorney, taking over for her mentor Maggie Fleming, who decided not to seek re-election after two terms in office. Eads has taken 59 percent of the votes counted so far, far outpacing Deputy Public Defender Adrian Kamada, who finished the night with 30 percent of the vote.

When Eads takes office, she'll see a familiar — if new — face on the bench, as Deputy District Attorney Steven Steward took 57 percent of the vote to win the judicial seat being vacated by Judge Christopher Wilson's retirement.

Elsewhere, incumbent Fifth District Supervisor Steve Madrone, who narrowly won election four years ago in a race that wasn't finally decided until weeks after Election Day, cruised to another term in office, taking 61 percent of the vote to challenger Larry Doss' 39 percent. A six-way race to finish a term on the Arcata City Council, meanwhile, was won by Alexandra Stillman, who took a landslide 41 percent of the vote to return to the council.

While decisive victories largely carried the day, there is a bit of intrigue remaining. Over in the Fourth District supervisors race, which saw three candidates vying to take over for outgoing Supervisor Virginia Bass, Eureka City Councilmember Natalie Arroyo ended the night clinging to the 50-percent threshold that would allow her to avoid a November runoff election. She currently has 50.21 percent of the 2,354 votes counted thus far, but her lead shrank throughout the night, and she seems likely headed into a November runoff with Mike Newman, who finished the night with 35 percent of the vote.

The race to become Humboldt County's next clerk-recorder and registrar of voters, meanwhile, seems certain to be headed for a November finish. Tiffany Hunt Nielsen closed election night with 46 percent of the vote, trailed by Juan Pablo Cervantes with 41 percent and Benjamin Hershberger with 13 percent. Unless Nielsen sees a surge in the ballots yet to be counted that pushes her past 50 percent, she and Cervantes will square off in a November runoff.

Find full election results in the grids below. And be sure to check back for post-election updates in the coming weeks until all the ballots are counted. 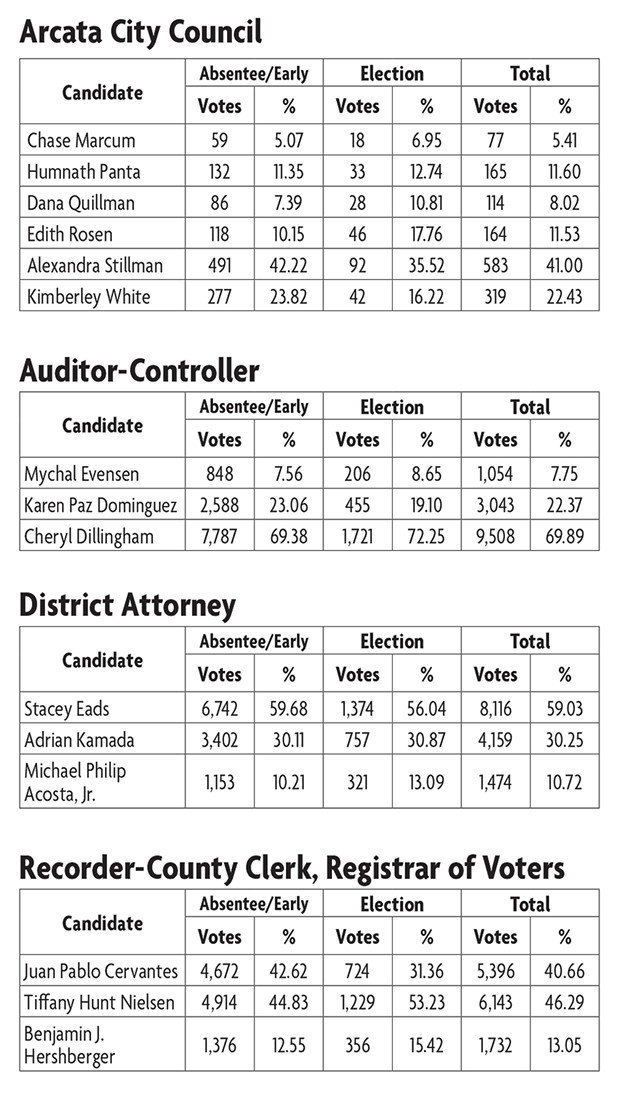