Dinner from the Dock

During the pandemic, seafood sales surge at the marina 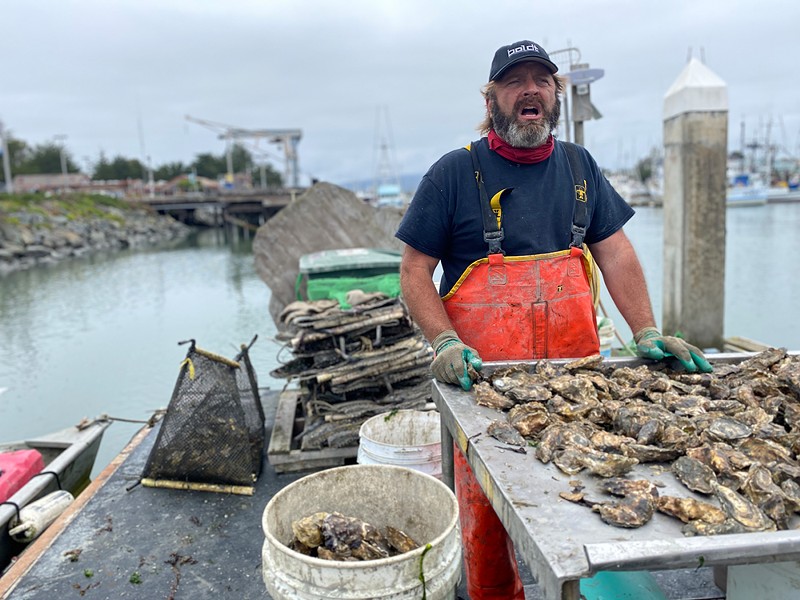 Photo by Ashley Harrell Sebastian Elrite, owner of Aqua-Rodeo Farms, sells Pacific oysters from his berth on B dock. 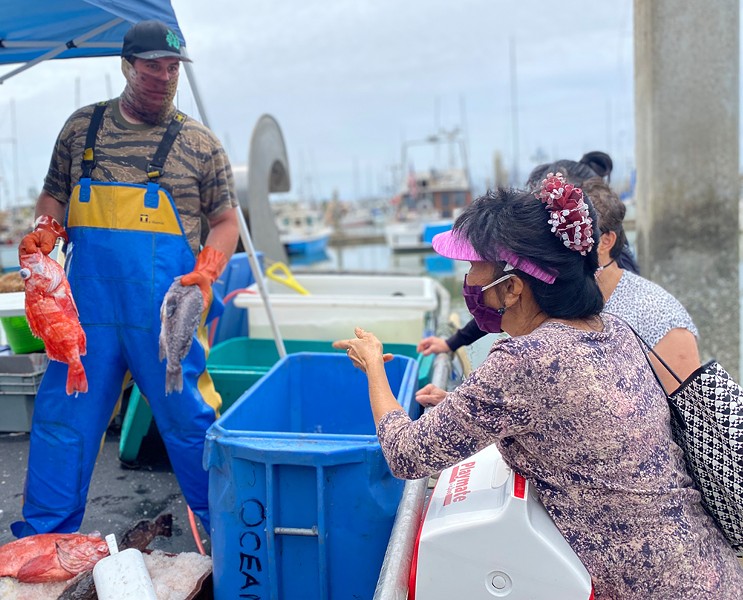 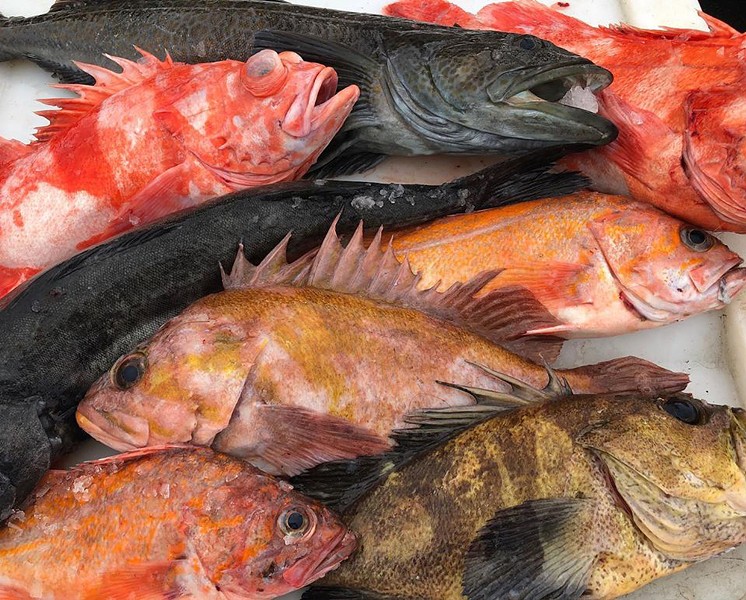 Courtesy of Harrison Ibach Rockfish come in many sizes and colors. 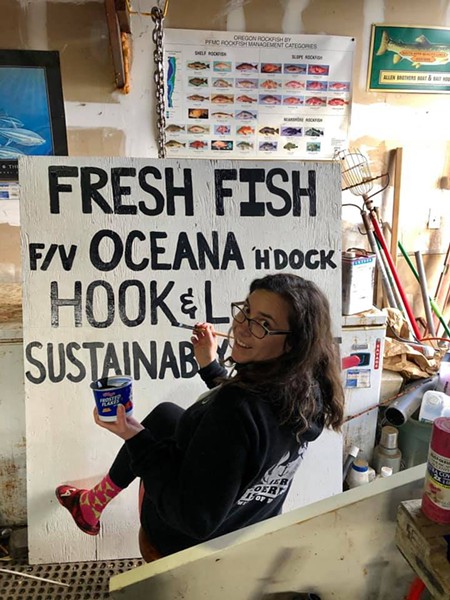 Capt. Harrison Ibach lifts a redbanded rockfish through a hatch from a lower deck. The fish's eyes bulge like a Muppet's, and its striped carnelian body dwarfs Ibach's rubber-gloved hand.

"Wendy, do you want this one?" he asks from behind a mask.

"No!" cries Wendy Chan, peering over her own mask at the fish. "I have no room."

Chan, a frequent Journal contributor, is more interested in two smaller black rockfish. Maybe a Dungeness crab? Oh, and also the cabezon, a bottom-feeder that tastes like the crabs it eats. Chan will use the fish heads for soup, steam the cabezon and marinate the rockfish to share with her elderly neighbors. She'll fry the crab with brown garlic, ginger, curry leaves and butter, and post that recipe on her Home Cooking with Wendy Chan Facebook page after feeding her family of five.

"As long as they have fish, I will always buy from the marina," Chan says. "It's the way of the small town life by the coast."

Chan was, until recently, an unlikely visitor to Woodley Island Marina. Three months ago the fresh hauls brought ashore were purchased by distributors and shipped far away. But since COVID-19 upended the supply chains that once moved Eureka's catch far from its origin, fishermen are now selling dockside.

The fishermen connect with the local community through road signs and Facebook pages announcing fresh fish. During the increasingly popular sell-offs, the lines of masked customers often extend down the dock and into the parking lot, rain or shine.

Such direct sales are not unprecedented. In the summer, fishermen have sold albacore tuna and Dungeness crab from their boats for years. There's a floating crab shack, Jenna Lee's Seafood, that's been selling live crab during the season since 2003.

What's changed during the pandemic, though, is the variety and quantity of fish available, and the number of people showing up to buy it. And some say the direct connection has been a long time coming.

Where Has All the Seafood Gone?

For millennia, Native communities on the North Coast have caught and consumed their own fish — especially salmon, a dietary and cultural staple. But since the 1850s, when Eureka became one of California's most productive commercial fisheries, much of the catch has left the area.

A colony of Chinese fishermen began drying and shipping fish by steamer to San Francisco as early as 1857, according to a fishing sustainability report prepared by Humboldt State University. By the mid 1960s, the report shows, commercial fishing was generating $12 million a year and made up 5.5 percent of Eureka's economy. And by the end of the decade, Humboldt Bay's 450 commercial fishing vessels were bringing in 26 million pounds of fresh seafood a year.

More recently, the industry has been in decline. Costs for permits and fuel are rising. Climate change and shifting ocean temperatures are impacting the distribution and abundance of fish. Government regulations are tightening and uncertainties loom over both the crab and salmon seasons.

Today only around 120 commercial boats dock at Woodley Island Marina, according to the Humboldt Bay Harbor District, and California Department of Fish and Wildlife data shows that an average of 12 million pounds of seafood is now offloaded in Eureka each year. What hadn't changed — until the pandemic took hold — was the disconnect between county residents and the local catch.

Before the spring, local fishermen sold most if not all of their catch to wholesale distributors like Pacific Choice Seafood and Caito Fisheries. These operations made business easy; after a day or five at sea, a fishing crew could haul up at the processing plant, offload the entire catch, get paid and get some rest.

The seafood would then be processed, frozen, packaged and shipped down the coast, across the country and internationally. Some smaller buyers would make purchases for high-end restaurants in places like San Francisco and, rarely, for local markets. Humboldt County's grocery stores and restaurants were not a serious part of the supply chain for the area's freshly caught seafood.

But when COVID-19 hit, the supply chain collapsed. Or as Caito Fisheries plant foreman Mark Hoffman puts it: "There's a hitch in the giddy-up — things ain't flowing like they normally would."

Restaurants shut down, transport routes closed and overseas markets dried up, and the price of seafood bottomed out. As crab season wraps up, processors are buying crab for as low as $3 a pound, and that's only if fisherman can bring in enough to justify firing up the boiler.

Facing all of these challenges, some local fishermen sold or dry docked their boats, looked for other work or applied for unemployment. Others like Ibach decided to try their luck selling directly to the public.

In step with area farm boxes selling out and an increase in sales at local farmers markets, there's also been an influx of new customers to the docks. They've come for the fresh air and the fresh fish, says Humboldt Bay Harbor District Executive Director Larry Oetker, but they've also come in solidarity with fishermen. In shopping at Woodley Island Marina, Oetker says, "you're directly helping a local entrepreneur."

For fishermen like Ibach, who is president of the Humboldt Fisherman's Marketing Association, the public demand offered an opportunity to get creative and try something new.

While he had always liked the idea of selling fish straight off the boat, Ibach hadn't attempted it because of the additional work required. Selling direct entails an extra permit, which comes with more regulations. It also means that after days at sea, the crew needs to hustle back and prepare the catch for two straight days of fish sales. If all the fish don't sell, the crew must then eat this cost, perhaps literally. The process sounded exhausting and Ibach already had a good thing going with his distributors.

When the pandemic interrupted those partnerships, though, and Ibach watched restaurants in California shutter, he decided it was time to sell directly to the public.

Ibach filled out the paperwork and purchased a retail license for $105. He bought a scale for $400 and a bunch of new plastic storage containers and shipping totes. He and his wife Cerise, who works as a teacher, then set up Facebook and Instagram accounts for Oceana Hooknline Seafood. Within two weeks of committing to the new strategy — in which they offered "sustainably caught, hook and line, fresh fish to sell at the end of H dock on F/V Oceana!" — word had spread quickly. On the first day the Oceana opened for business, a socially distanced line formed down the dock and well into the parking lot. That line remained long throughout the day, Ibach remembers. People continued to wait for their fish, even as the sky turned gray, even in the pouring rain.

Of the 14 boats that hold permits to sell directly to the public from the marina, Ibach's operation has become one of the most popular. Its Facebook page has amassed more than 900 followers. Comet Fisheries and Silveira Seafoods also have Facebook pages with increasingly strong followings, as does oyster farmer Sebastian Elrite's business, Aqua-Rodeo Farms.

The bay's oysters have always been available locally but Elrite says he has seen an uptick in sales at the marina during the pandemic. He's at the B dock Wednesday through Sunday, usually charging $10 a dozen, which he refers to as "the COVID special." Those sales have offset some losses from his wholesale and restaurant accounts but times are still tough. Elrite is hoping to open his Eureka tasting room for curbside sales, offering local beer, wine, cider and kombucha paired with oysters, cheese, meat, bread and desserts. His business reopening plan has been approved by the county, Elrite says, and now he's looking into seating customers in a parklet in front of the establishment.

Once that's set up, he says, "we'll just need personnel to fill the schedule and to replace all the things I ate or drank so they wouldn't go bad."

But is it Sustainable?

It's certainly been a treat to get fresh oysters for less than $1 a pop, crab and lingcod at $6 a pound and rockfish for $3.50 a pound. But as restaurants begin opening back up and the supply chain rebuilds, will Chan still be able to get her seafood at the dock?

He's touched by the support from the community during the pandemic and the numbers are "penciling out just fine," he says. While the direct sales are a bit more work, all that extra effort has been worth it.

"It's been so rewarding to serve the local demand over these past couple of months," Ibach says. "I'm going to keep this connection with the community."